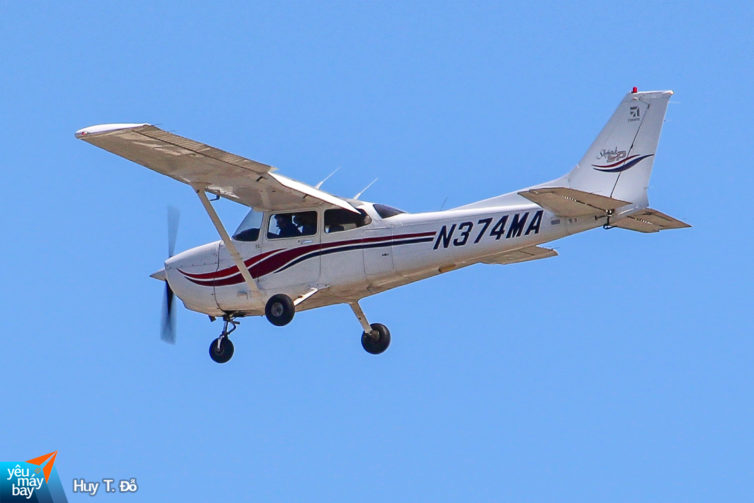 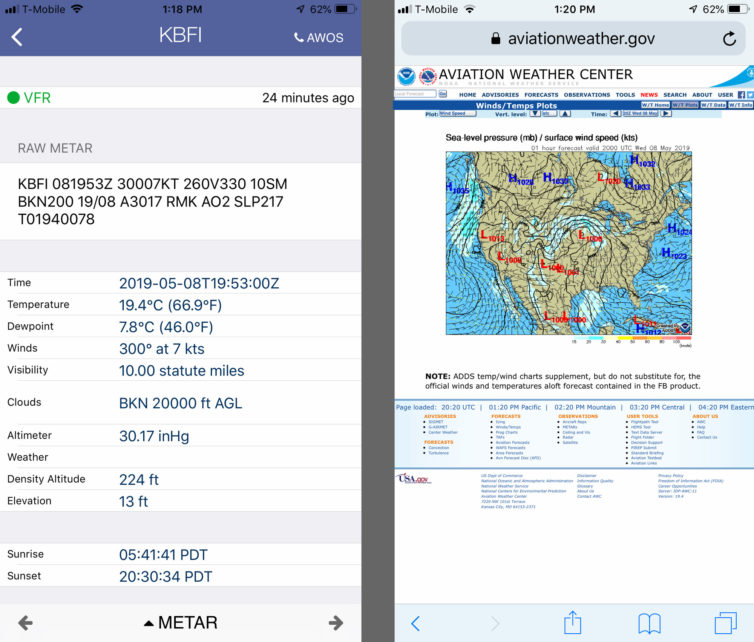 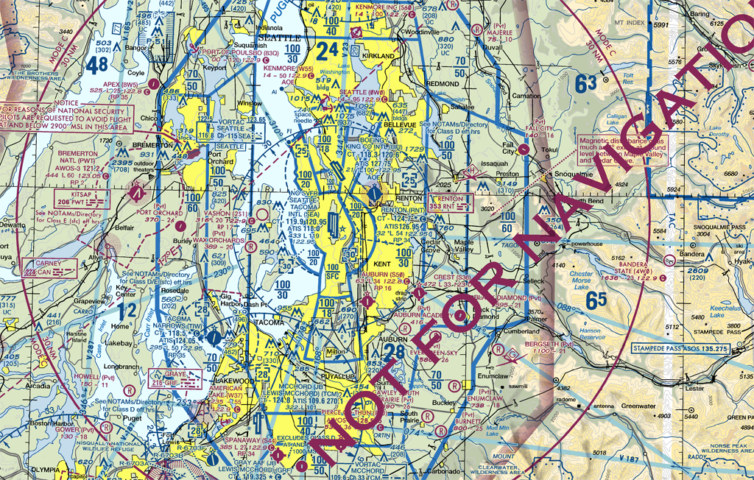 Aviation charts also have a bit of a learning curve

My first lesson with Carl, my CFI, was in a static (meaning not moving, although it does have a hydraulic system that simulates control resistance) FAA-approved, OneG G650 C172 flight simulator. As such, it even has a registered tail number for logbook and maintenance tracking. Galvin also has a full-motion simulator, but I’ve not used it yet.

So, for the first lesson, I basically did a simulated takeoff, a flight to the local practice area, and a return. I managed to crash the sim when landing. It was a humbling experience that felt uncomfortably real.

Maybe it’s because I’m not a gamer and am unused to such experiences, or maybe it’s because I thought I’d just waltz in and nail it, but I went home a bit more shaken than I expected I could be following a simulator flight. Maybe that’s why Carl likes to start people in the sim â€” it’s a good way to rid folks of any pretenses that this is an easy thing. 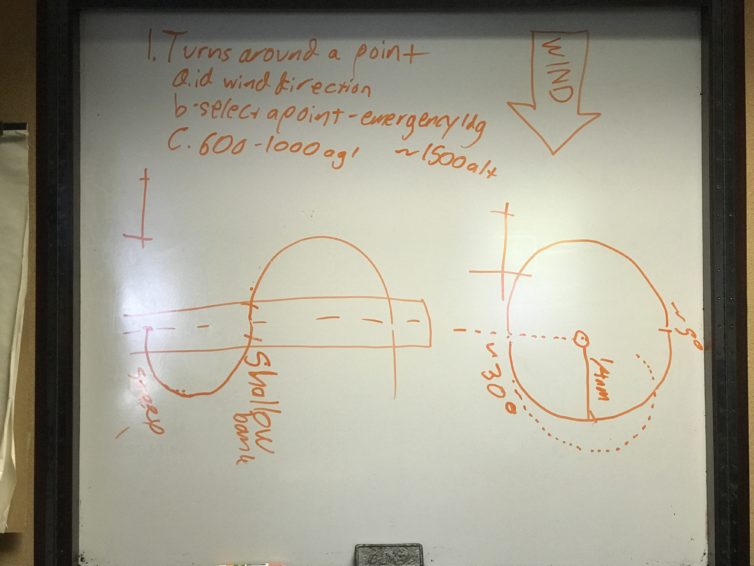 My pre-flight briefing for ground-reference maneuvers

My second flight lesson was a real flight in a C172 on a gloriously clear Sunday morning. We started the session by spending 45 minutes on a very thorough training preflight of the airplane, going slowly through all of the checklists, with Carl explaining the details behind each item.

Taxiing is, well, kind of a trip. You don’t steer these planes with the yoke; that’s connected to wing control surfaces that need a lot of wind flowing over them to do their jobs. You steer with your feet, using either the brakes (the top each rudder pedal also serves as the brake for either the left or the right wheel), or the nose-wheel steering, accessed via the bottom of each pedal. It takes some serious practice to keep the plane tracking even close to straight. 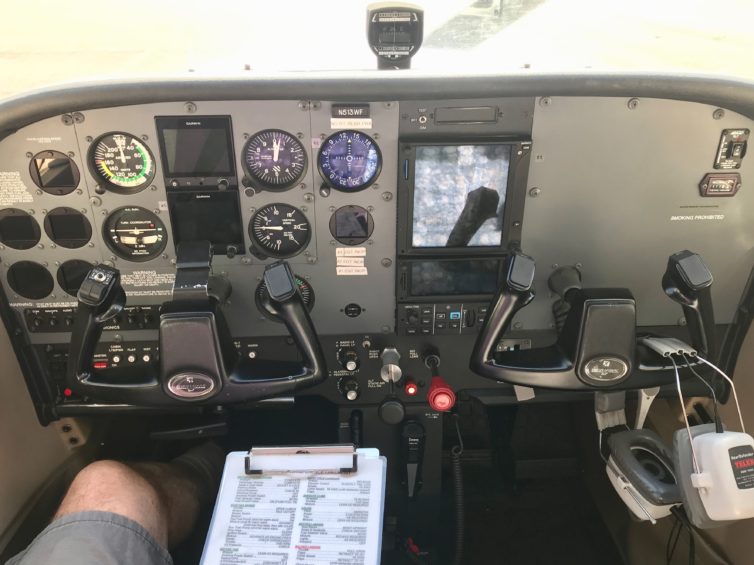 Getting ready to run the checklists

Anyway, once we stopped at the run-up area to do the pre-takeoff engine and electrical checklists, Carl performed the takeoff, handing me the controls at about 200 feet AGL (above ground level; aviation loves its acronyms). I flew for the rest of the hour, traveling to a nearby bit of airspace called, creatively enough, the northeast practice area, which is located about a dozen miles northeast of Boeing Field.

It was somewhat turbulent (Carl later described the conditions as being “a bit zesty”), so it was tricky to keep the turns smooth when we kept getting knocked around. But it made for very good practice – Carl talked me through making level turns, climbing turns, and descending turns while bouncing around a bit. The one-hour flight was over in a seeming eye blink. 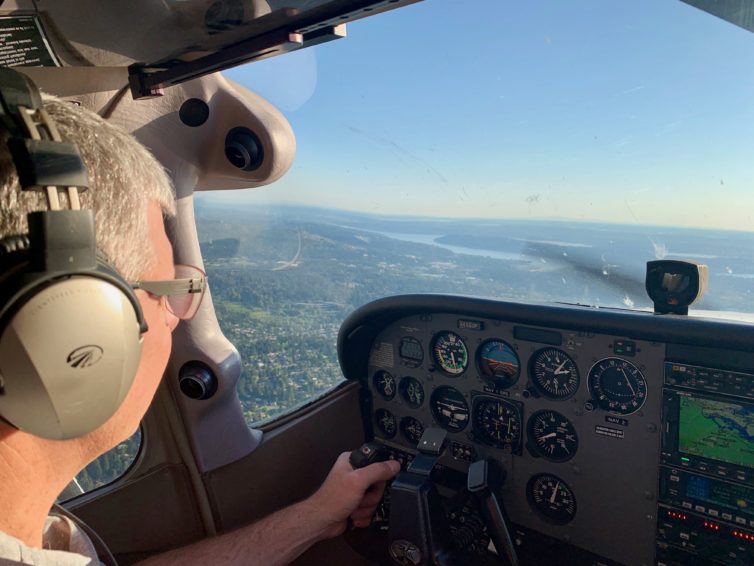 I flew back to BFI, then Carl took over for the downwind leg and landing, because a business jet was on short final to the big runway at the same time as we were lining up behind another Cessna on the smaller, parallel runway.

The jet landed beneath and behind us, and, at the same time, the Cessna ahead of us decided to do a go-around, and then we landed. Everyone was in contact with, and directed by, the control tower. Despite how hectic that sounded, everything went very smoothly.

This learning process has basically turned into a full-time job.

And do I ever have a lot of work to do.