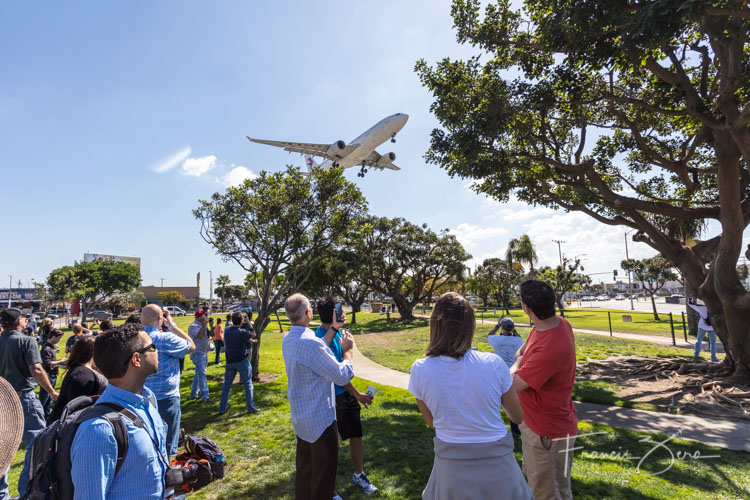 What is Dorkfest? An awesome, laid back event that our friend Brett Snyder (aka CrankyFlier) hosts each year. As he describes the event, it’s “where youÂ come to the In-N-Out burger right across the street from the northern runways at LAX (9149 S Sepulveda Blvd, Los Angeles, CA 90045), grab a burger, and then watch airplanes from the park across the street while talking shop with other dorks. This isnâ€™t an organized event in any way. There is no program. Just show up, eat burgers, and watch the variety of heavy metal coming into LAX.”

It is a great group of folks that show up each year. Even if you are one that normally doesn’t do events like this, or might be a little bit shy, know that this is a great group of people and it is easy to start up a nerdy conversation.Â I will be heading south again for the day from Seattle to join in on the fun. Hope you make it out and if you do, for sure say hello! (I look a lot like the guy on my Twitter profile).

Learn some more about Dorkfest:Â
– Read more on CrankyFlier
– Check out what happened last year (and see sweet pics)

https://www.airlinereporter.com
Five Items I Always Have In My Carry-On Bag
China Eastern Economy: Does it Deliver?
1 Comment

Excellent article David, thanks for sharing this.

This is a fantastic idea and something I would definitely be interested in attending.

I’ve been to a number of organised events over the years and always thought they would benefit from having a more relaxed agenda.

It’s a great way of encouraging people to get involved with aviation.