Two cities on either side of the country have become the epicenter of a battle royale that would make wrestling promoter Vince McMahon proud. Put on your best ring announcing voice and proclaim this the ’œBattle of SEA and RDU!’ (rolls off the tongue better than “Seattle-Tacoma International Airport versus Raleigh’“Durham International Airport)

Through a TV news and PR career, I’ve lived in some cities I would have never imagined, including six years in Raleigh, NC (2001 to 2007). Back then, American Airlines dominated with regional jet service to smaller cities and big planes to major hubs of Chicago, Dallas, Miami, and New York.

What a difference a decade makes. Thanks to increased competition and more nonstop flights to cities that were once ignored by the airlines, the consumer has more choices than ever as Seattle and Raleigh, NC have two nonstop flights that started within the past two years. RDU also has a stunning updated terminal that makes Sea-Tac’s 1970’s airport look even worse than its brown facade and cramped restrooms seem. 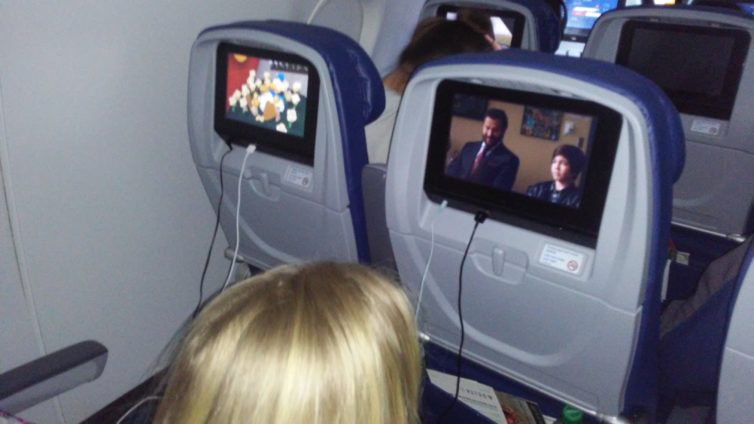 Parent’s best friend on a long flight! Some in Delta’s fleet have live satellite TV, others just have pre-loaded movies. – Photo: Brian DeRoy

Delta is using one of its aircraft from its Northwest Airlines merger, the Airbus A319. I flew the A319 and A320 quite often when the plane had a red tail and I held a NWA World Perks card. In the past couple of years, Delta has redone the interiors, adding LED lights in dedicated above-seat pods and optimizing galley space. The plane has 132 seats (12 first class, 18 Delta Comfort, and 102 main cabin). 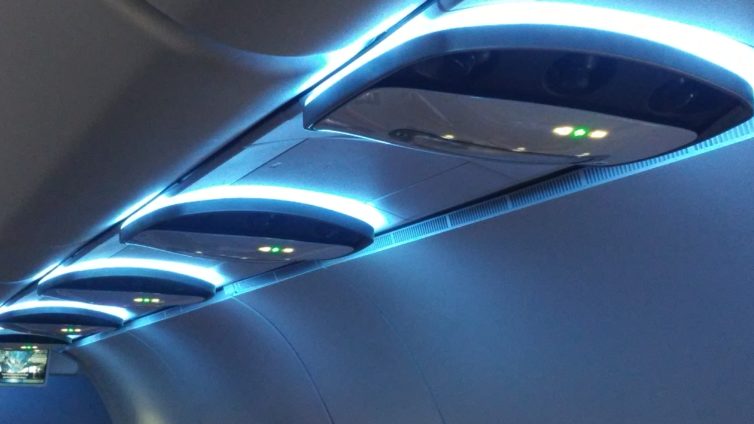 Alaska does not have seatback monitors, opting instead for its Wi-Fi ’œAlaska Beyond’ entertainment option. If you don’t have a computer or tablet, Alaska will rent you one. Personal preference, but I like the seatback monitor. One less thing to hold and potentially lose when getting off a long flight. From an airline standpoint, no seatback monitors mean less weight and maintenance.

Alaska has a disadvantage on this route, as it flies a Boeing 737-900 with 178 seats (16 first class, 24 premium, and 138 coach). Can Alaska fill those 32 extra seats compared with the A319?  A larger plane isn’t as efficient going all the way across the country with empty seats. Alaska had this response to my question.

“We optimize the fleet and makes adjustments as needed based on demand,” Alaska spokesperson Ann Johnson tells AirlineReporter. “This is one of the benefits of having a mixed fleet as it allows us to match up the optimal aircraft on a given route.”

Both airlines have a free sandwich or similar food offering for the five-and-a-half-hour flight. Thanks to its battle with Delta, Alaska’s Premium Class mirror’s Delta’s ’œComfort’ offering that includes free adult beverages and three inches more legroom that certainly make a difference on a long flight. Alaska’s RDU to SEA flight has more premium and first class seats than Delta, so your upgrade chances could be better with the Eskimo! 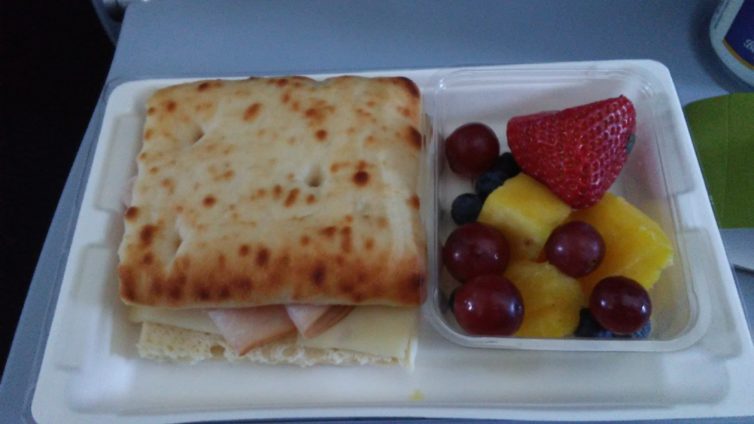 Alaska has the advantage on the west coast as its Seattle hub offers more than 80 connections, around 20 more than Delta. But Delta is slowly chipping away at Alaska’s Sea-Tac dominance.

Stats ending in 2017 show Alaska losing 1.2 percent market share and Delta gaining 1.6. A more telling stat, Alaska’s passenger total increase was at 0.1 while Delta added 10.3 percent more passengers (around one million) in 2017. Only the airlines know the true story since market share doesn’t mean much if you’re giving away seats to gain it.

Over the past few years at RDU, Delta has quietly overtaken American to grab top market share at 31 percent. Like Seattle, RDU Airport is a Delta focus city with nearly 30 nonstop destinations. East coast fliers now don’t have to always connect in Atlanta.

Combined with Virgin America, who offers service to San Francisco, Alaska has less than two percent market share, while its partner American has 27 percent, so it’s a close fight. 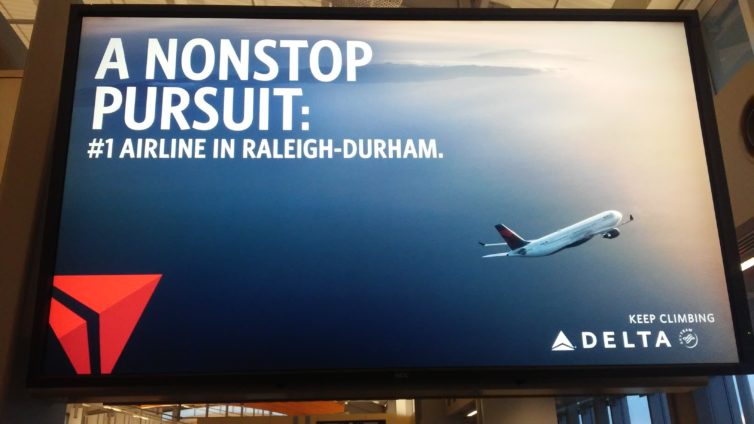 A sign you’d never imagine seeing at RDU 10 years ago. Guess whoever has the title belt gets to pose in the middle of the ring with it! – Photo: Brian DeRoy

Numbers, free drinks, sandwiches, and seatback monitors aside ’“ the real winner in this battle is the consumer. I got a nonstop flight all the way across the country for a little less than $200! Thanks to the competition in both cities, Delta and Alaska are upping their games with better amenities and competitive prices.

Unlike a Vince McMahon-sanctioned WWE bout where the result is pre-determined, you get to play Vince in this match by making your own choice of airline as the battle for SEA and RDU rages on!

CORRESPONDENT - CHARLESTON, SC A lifelong aviation fanatic and former TV news reporter, Brianâ€s unique flight experiences include an Air Force B-1 Bomber and Marine Osprey in addition to working for Boeing and the Seattle-Tacoma International Airport.

RDU has a real warm spot in my heart. I live west of Winston Salem, NC but fly primarily out of RDU, driving right past GSO on the way. GSO is a 35 minute ride for me and RDU about 90 minutes. And, I fly principally on DL. The airport is roomy, clean and very up to date. Plus, because of the competitive issues, DL is significantly less expensive than GSO and add to that, the great numbers of Non-stops. Also, the parking deck is uber convenient although getting a bit pricey lately (double the price from 4 years ago). And, an important item is, RDU has a Delta Sky Club which GSO doesn’t have. Oh yeah, DL goes direct to CDG with a good schedule and a recently upgraded ride on a 767. Yeah, RDU is a great place to fly from. BTW, I have been to SEA recently and from a facility POV, it’s not so great although if your going to Asia, it’s a great way to go.