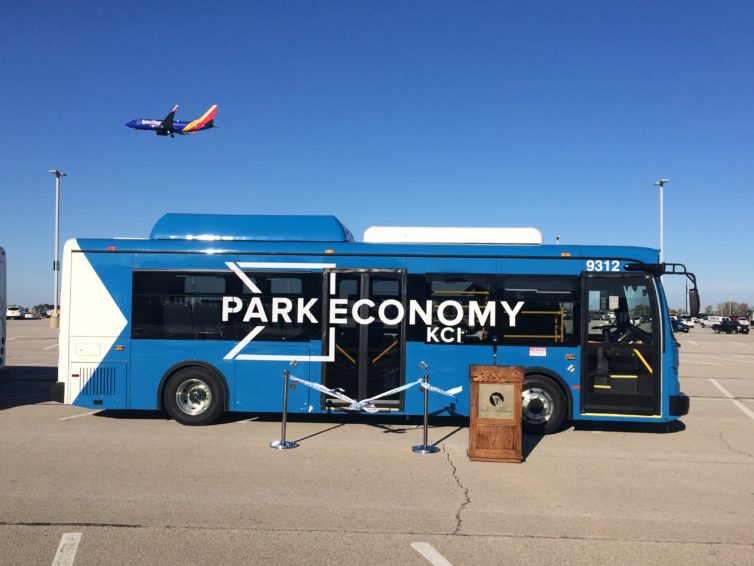 Today, countries all around the world are celebrating Earth Day. We recognize that transportation accounts for the vast majority of climate-changing emissions, and for what it’s worth, the industry and its supporting partners are starting to as well. Some could argue that the change is coming too slowly and that’s hardly contestable. The solution to climate change isn’t something we will solve overnight, or, apparently, in the 48 years since the first Earth Day. However, we at AirlineReporter are optimists and do our best to highlight the positives wherever we can. Enjoy this story about how a medium-sized, midwest airport is taking steps to sprinkle a small bit of sustainability into their own operations.

Late last year my hometown airport quietly deployed four brand-new 100%-electric buses to their fleet. Why should AirlineReporter readers care? Because being first is important. The Kansas City airport was the first U.S. airport to deploy all-electric buses alongside their existing fleet. Not Portland, not San Francisco, nor Austin – Kansas City. An airport in a so-called ’œred state’ beat dozens of others on a short-list of airports in progressive and environmentally-friendly states. As a plug-in driver myself, I’m proud to see Kansas City International Airport lead its peers. Excellence deserves praise, and that’s exactly what I intend to do.

I would contend that the best-managed airports are ones which appropriately reflect the local culture. These economic drivers are, after all, the front door to the greater community and a basis for first impressions. Thanks in part to leadership by KCP&L, the local electric utility, our two-state Kansas City metro is home to one of the largest EV charging station networks in the U.S. The Kansas City metro area also routinely ranks near the top for electric vehicle sales each year. Electrics are a big deal here in what many of us now refer to as the “Midwest Silicon Prairie.” It should come as no surprise that these electric buses arrived less than a year after the airport and KCP&L installed 27 dual-head (meaning two outlets) ChargePoint stations in the various airport-managed and partnered parking facilities. 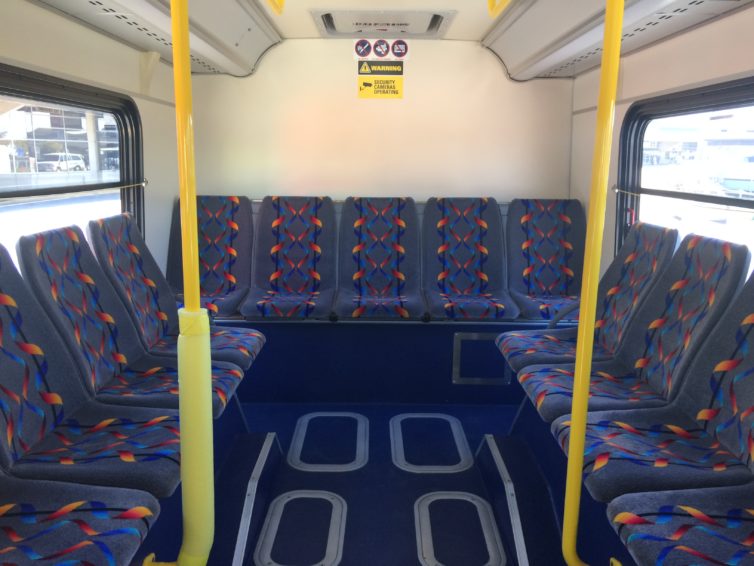 Looking inside one of the electric buses – Photo: Kansas City Aviation Department

About the electric buses

The BYD electric buses picked up by Kansas City International offer a 144-mile range and can recharge in 2-3 hours using special high voltage chargers which the airport had installed as a part of their purchase. These buses are currently deployed on the economy parking circuit, the largest and most demanding of the bus assignments at the airport.

As a plug-in driver myself, the number one question I get is about range. ’œHow far can you get per charge?’ Despite being an electric vehicle proponent, I still recognize the importance of a healthy dash of skepticism. On a recent visit to the airport, I did my best to replicate the ’œblue bus route’ (economy lot buses are simply known as the blue buses) to understand the time and mileage associated with a single round. The roughly seven-mile trip clocked in at just under 30 minutes with typical traffic, lights, and low speed limits. Of course, I wasn’t making multiple load/unload stops along the way. Using a liberal estimate of roughly 14 miles driven per hour, the buses have more than enough range for a typical 8-hour shift, potentially enough for a 12-hour shift if the operator plugs in while on lunch.

The BYD electric buses join a fleet of compressed natural gas (CNG) powered buses which, again, KCI was among the first to implement. CNG has become the defacto-standard for most public buses, just as I expect electrics will given time.

BYD is Chinese-based and still an obscure manufacturer in U.S. BYD, which stands for ’œBuild Your Dreams’ is North America’s largest electric bus supplier with a large plant just outside of Los Angeles, CA. A firm backed by Warren Buffet, they also claim to be the largest EV-bus company in the world. BYD has delivered around 150 electric buses domestically, but over 27,000 worldwide.

BYD has recently made headlines in delivering over 16,000 electric buses to Shenzhen, the Chinese industrial megacity with a population of nearly twelve million. Shenzhen, the home to BYD HQ, just recently met its ambitious goal of converting their entire bus fleet to electrics and has now refocused their attention on 100% conversion of their taxies.

I have written a lot on AirlineReporter about happenings here in Kansas City and our airport over the years. Typically my stories are regarding new (to us) news or coverage of events that regularly happen elsewhere. It’s not often that we here in the so-called ’œflyover country’ get our place in the limelight. I am deeply proud of our airport and its administration for their environmental leadership and reflection of our local, passionate electric vehicle culture. I look forward to seeing other airports follow KCI’s example.

Thank You Pilots
How to Apply, Interview, and Land An Airline Job!
6 Comments

When I was growing up in Belfast Northern Ireland in the early fifties the city transport utility had a fleet of electrically powered trolley buses.For some unknown reason they were withdrawn from service in the 70’s Toronto Canada also had a large fleet of trolley buses and in the ’80’s they were also withdrawn from service..I’m not too sure if we are going forwards or backwards with the electricaly powered vehicle so called love affair

Great article, always upbeat to hear when these new modes of powering are actually put into service! I saw a fuel cell bus in Oakland (Bay Area, CA) recently, it was whisper quiet and with regenerative braking it was noticeably quicker to stop with less fuss than a diesel or CNG bus that came by later.

Howdy, Maurice. Thanks for reading and taking time to leave a thoughtful comment. I think this renaissance is more than toying with old technology. The electric trolley and cable cars were replaced at a time of great prosperity and when many countries saw mass migration away from cities into the suburbs. The appeal of public transit waned as cheap cars flooded the market. KC had streetcars years ago which were all ripped out, only to again return just recently. I think we’re on the verge of a real rebirth here fueled by increased consciousness as it relates to carbon footprints, as well as major advancements in technology.

Thanks for the note, Chris. Glad you share my optimism!

Fun to hear about your fuel cell bus spotting in the bay area. I’ll tell ya, the auto manufacturers have been touting fuel cells for decades without much meaningful progress. I can’t help but wonder if they knew it wouldn’t come to fruition and could use it as an excuse for inaction on other technologies. Then there’s the issue of where we’ll get the hydrogen. Electrolysis via solar would be a good bet given the steady decline in solar infrastructure costs, but I’m not sure there are enough organizations willing to make that investment in the short term. I don’t believe there’s a single magic bullet out there, I’m envisioning a blend of techs that get us where we need to go over the next 30ish years.

Great dialogue, glad to have you join in on the discussion!

Not only is it environmentally-friendly, I’d be willing to bet a day’s worth of electricity is much cheaper than a day’s worth of gas. I’ve always thought that those sort of geographically confined fleets were the prime candidates for electrics (with other examples including university campus vehicles), yet it seems like EV marketing is always aimed at “normal” users.

Looking forward to see this on my next trip!