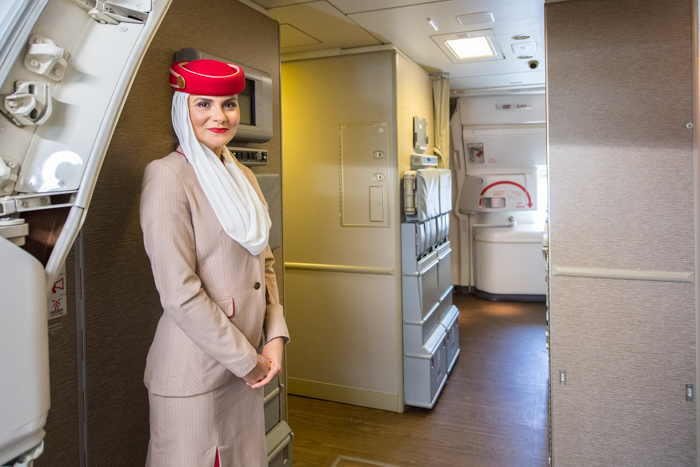 Emirates recently invited AirlineReporter for a tour of their new business class cabin in their reconfigured 777-200LR aircraft. The beautiful cabin is laid out in a 2-2-2 configuration. Fort Lauderdale is the first gateway to feature the newly refurbished aircraft. This also provided a nice setting to sit down with some of the airline’s leadership to learn more about this new product and their direction. 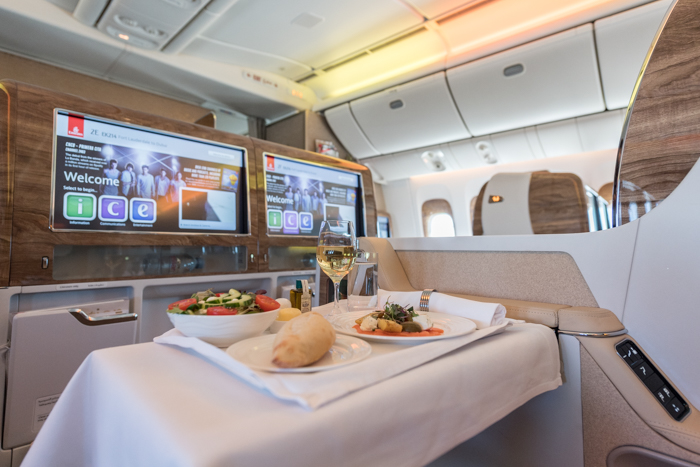 Emirates plans to invest over $150 million to refurbish their existing 10 777-200LR aircraft. The two-class configuration features 38 business class seats and 264 seats in economy class. I was excited to get on board and see for myself the changes. Although not revolutionary, they will allow Emirates to better compete. 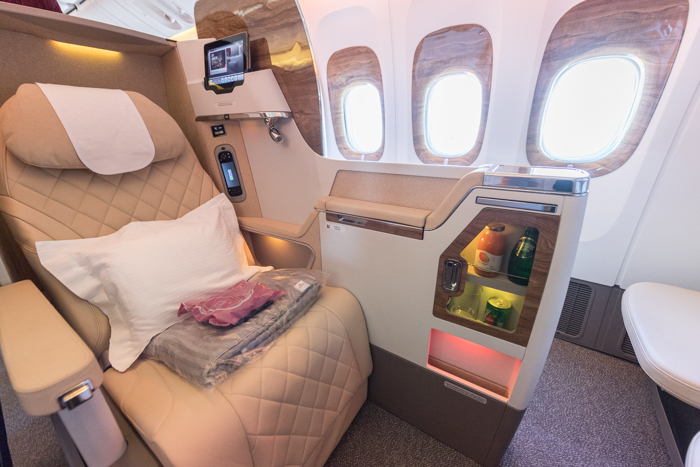 The new business class features electronic window shades, a social area where guests can help themselves to premium snacks/beverages during the flight, and larger in-flight entertainment screens (from 17â€ to 23â€). 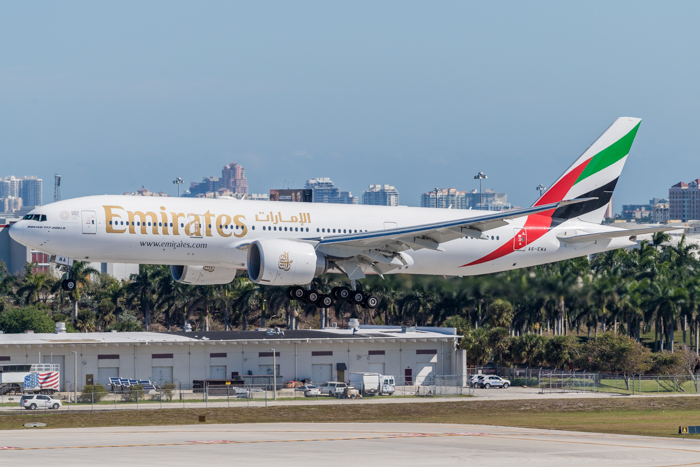 The updated economy class features seats with full leather headrests that have flexible panels that can be adjusted, and the seats have been refreshed with the newest color palette. While still in a 10-abreast configuration, the airline is hoping the premium amenities will sway passengers. 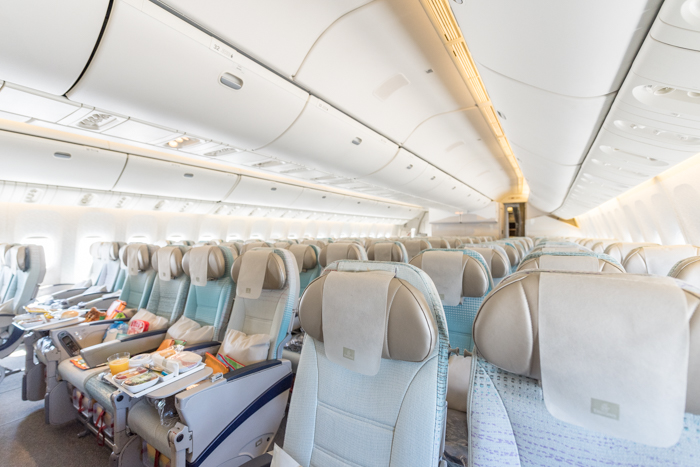 While in Fort Lauderdale for the unveiling of Emirate’s new Business Class, I was able to sit down for a quick chat with Matthias Schmid, Senior VP North America – Emirates. Here is our conversation… 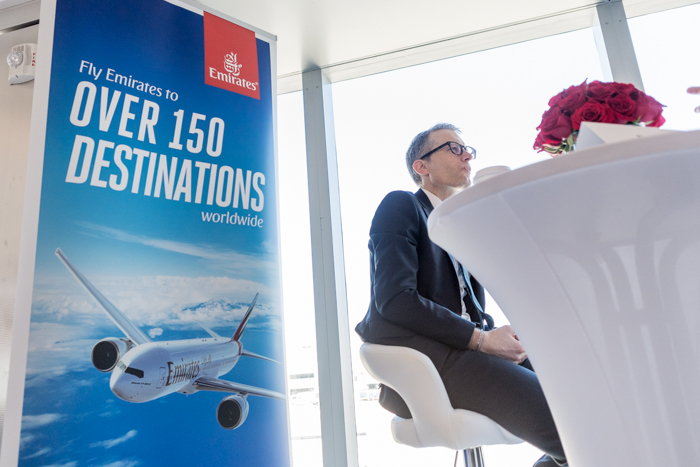 Q: Can you tell me a little bit about your day-to-day job responsibilities?

A: Iâ€™m the Senior Vice President for North America – Emirates. Iâ€™m responsible for the entire Emirates operation in the U.S. and Canada, the major focus is really on the commercial side. We have 80 people on the commercial side that manage all of the relationships with our distribution partners, corporate accounts, etc…. We have a relatively large freight operation here in the U.S., certain destinations are operated by dedicated freighter aircraft in addition to the passenger aircraft so we have around another 80 colleagues that are on the Emirates SkyCargo operation. We fly in North America to 13 airports, so we have 13 airport service managers with their teams at respective airports. In four airports we operate our own lounges, so we have our own lounge staff that are taking care of our lounge operation. We have the finance organization which is based in New York and the HR organization is based in New York so Iâ€™m really trying to coordinate all the different activities here in the North American market, but my background is really a commercial background so the thing that still excites me is in the morning to look at the forward looking developments, so I really try to have my ears and my eyes on the street to really understand whatâ€™s going on. 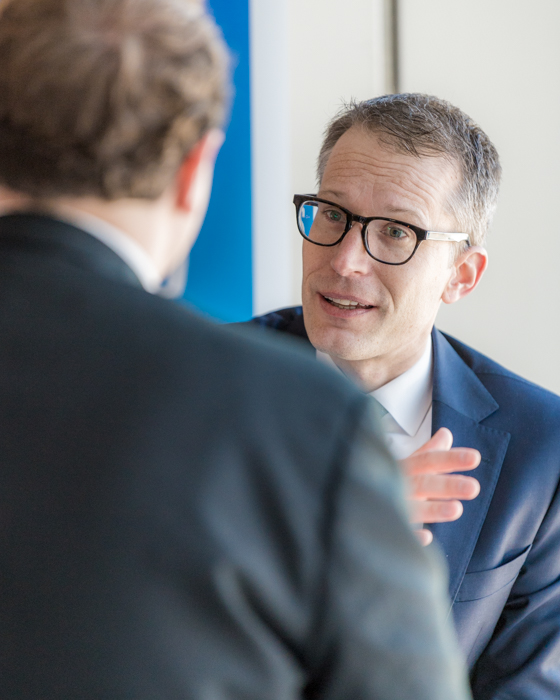 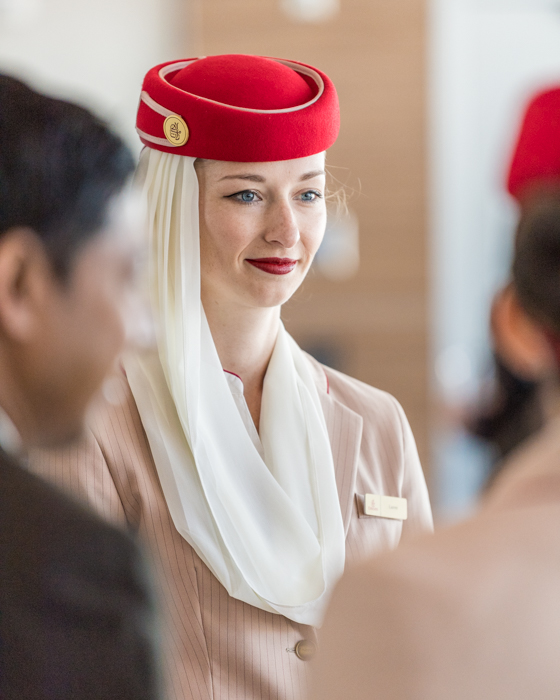 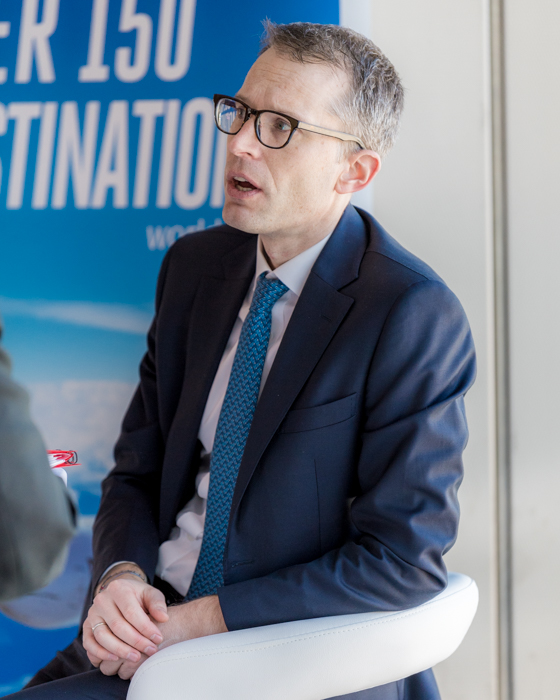 Q: In your current role at Emirates what would you say has been your biggest challenge?

A: Every job has its challenges, I started in Europe and got transferred to Dubai where I had more of a global strategic role and I was transferred to the U.S. five-and-a-half years ago. I think the biggest challenge was, I joined the U.S. team when we really just started with this massive expansion that weâ€™ve seen. So in September 2012 I think we had 49 weekly flights into the U.S. with six gateways and, now five years later, we fly to 12 gateways in the U.S. with 101 weekly flights. So itâ€™s really managing this massive growth and making sure that you also structure the organization in a way that you can manage the growth in a sustainable way. 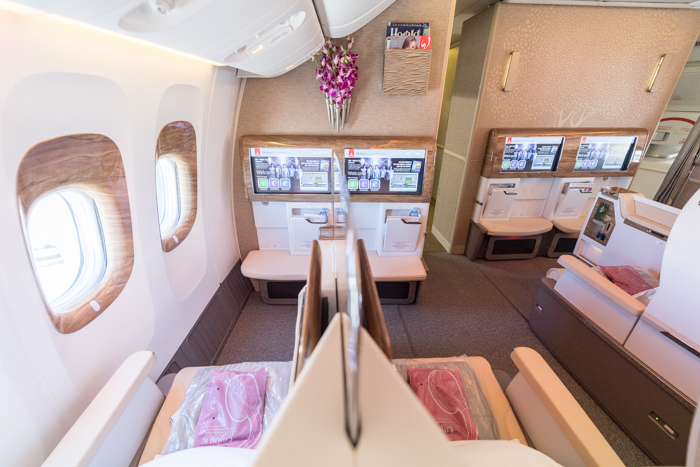 Q: In 2017 Emirates had to deal with the electronics and travel bans; now that itâ€™s been resolved have your capacity numbers returned to pre-ban figures and are you maybe working a little closer with the FAA/US government so that Emirates is a little more ahead of the curve in the case there are more obstacles that may come up in the future?

A: We already, before the ban, worked very very closely with the FAA & Homeland Security. We have an entire department in Dubai (group security) who are basically in daily contact with authorities around the world. It was no doubt a very challenging year for us. With the travel ban first in January and then in March the electronics ban and yes it had an impact on our passenger numbers from the U.S. and also into the U.S. Certain flows were more affected than others, but now yes, we are really back on track and I would say the recovery really started in July/August of last year already when we really came back to previous year figures. Now weâ€™re in the March so the first quarter for us was very strong and I also think itâ€™s a sign that we put additional capacity again on U.S. routes. Weâ€™re going from five weekly to seven weekly at Heathrow and the same in Orlando, weâ€™re upgrading Houston to an Airbus A380 from a current 777 starting June 1st so we are seeing moderate growth again on U.S. routes.Â (Editor’s note: after this interview took place, Emirates announced some service frequency reductions to Fort Lauderdale and Orlando.) 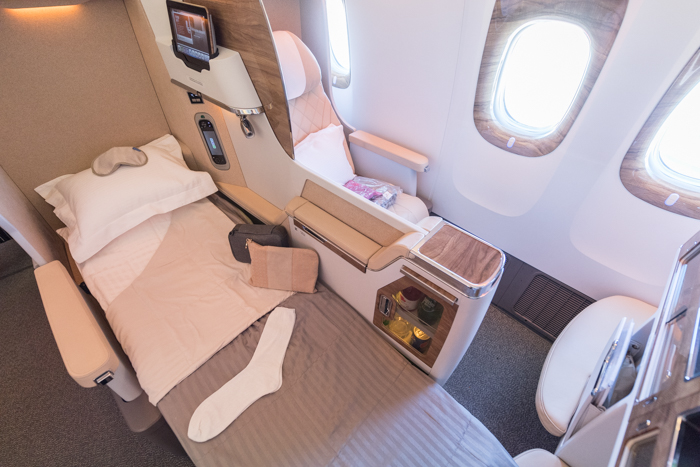 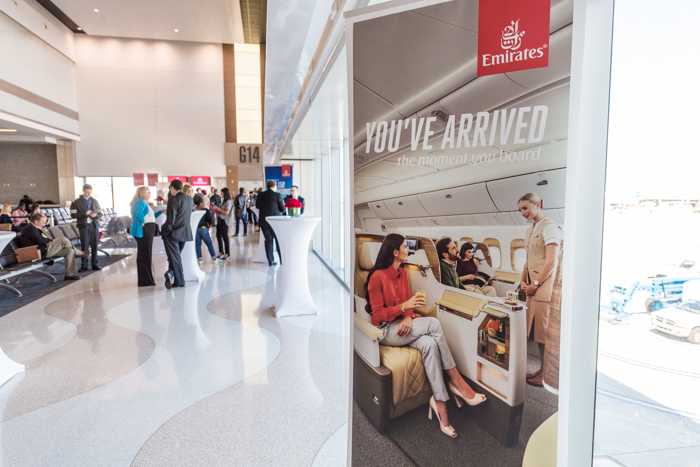 Q: Youâ€™ve spoken in the past about capturing the cruise business here in Fort Lauderdale, howâ€™s that going?

A: Thatâ€™s actually going very well, so the cruise business is really core, we call it baseload for us because itâ€™s typically business that books well in advance so the booking cycle is very very long which is nice for us, but on the other hand if you miss that booking window you canâ€™t really make it up later on and weâ€™re changing a couple things for the summer schedule. Starting March the 25th in order to capture even a little bit more cruise traffic the key change that we do is currently we have a 10:55am arrival which is a little late so now we pushed it to 9:59am as of March 25th and that is really primarily because of the cruise segment so for the cruise operators its key that all their crew members clear customs before noon, that gives them enough time so basically if they clear customs by noon they save an entire rest day for the crew so for them financially its quite attractive because then they can deploy the crew already on the following day on the vessel. 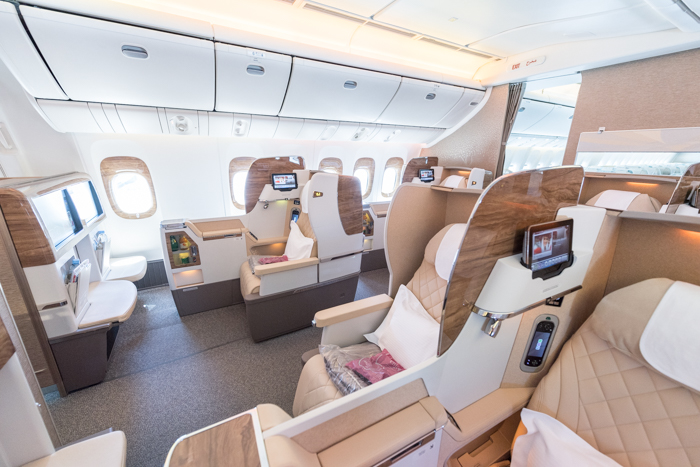 A: I think there are a number of markets where there is potential for an A380. The big limitation that have is that certain airports arenâ€™t really ready for the A380. If you talk about Seattle for example they cannot handle an A380, but there are a number of A380-capable airports that we operate into. Chicago is one, Boston is one, and Dallas is A380-capable and if we see strong demand and growing demand then those are the natural gateways that we have on the radar. 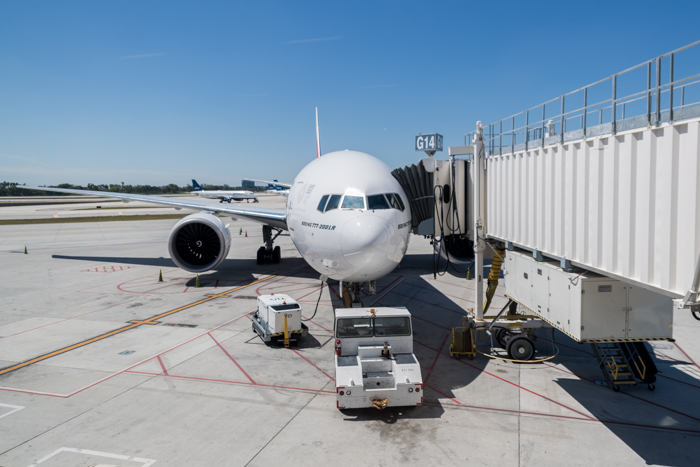 Q: Any chances of Orlando maybe upgauging to an A380 (which is my home airport)? 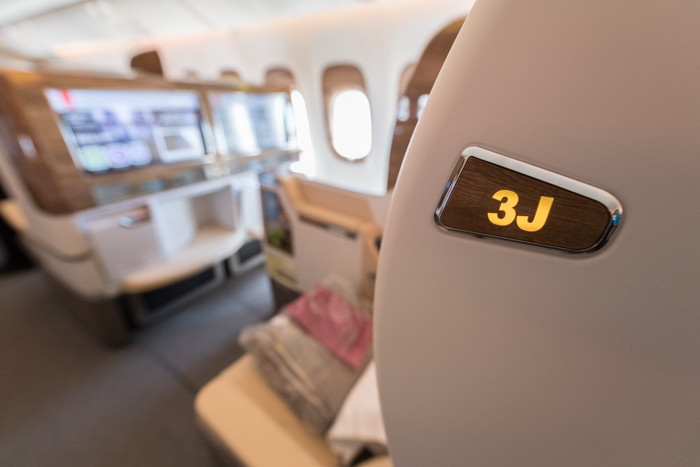 PHOTOGRAPHER - ORLANDO, FL Michael is a CrossFit/fitness photographer with a passion for aviation.

http://flsportsguy.com
Swiss Takes Delivery of its 10th and Final 777-300ER
No status? No problem. For $9+ You Now Can Fly VIP with Priority Boarding on United
2 Comments

Can he enlighten us if Emirates is looking for Aircraft Maintenance Technicians in the Fort Lauderdale area? I’ll be finished with Aviation Maintenance School in March 2019.

Ryan: In FLL Emirates uses Swissport and several other ground ops vendors; they have no local tech ops/MX presence I am aware of. BA also operates a 777 out of FLL so they may share some resources with them.