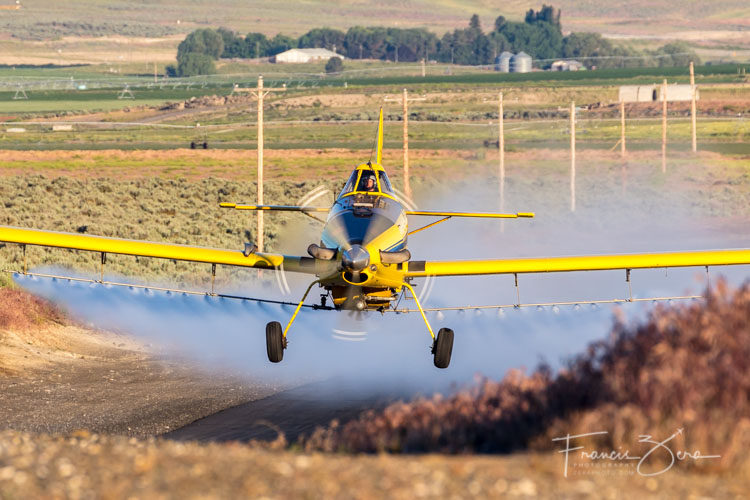 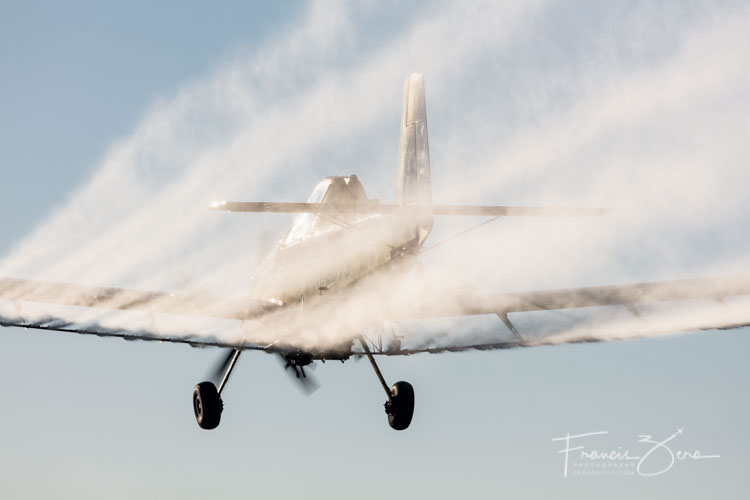 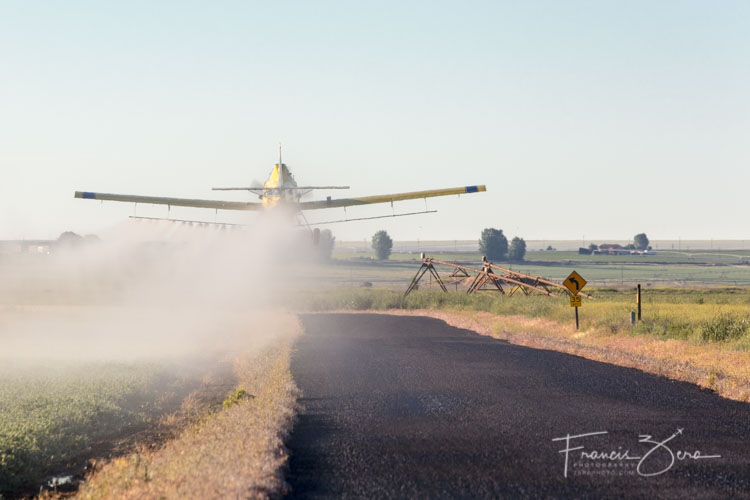 “From the ground perspective, it may look like weâ€™re being crazy, but I tell you everything is preplanned with GPS, even shape-planned, and fields are pre-scouted to make sure there are no surprises before we send the airplane out,” Morse said.

The aircraft are turbine powered, and their small cabins are pressurized to keep the chemical spray out of the cockpit. The Air Tractor 602s that GEM Air flies can hold up to 630 gallons of chemicals, have a maximum speed of 198 mph, and can cruise at 150 mph for 600 miles. They’re serious airplanes.

“Back in the day, these planes cost $10,000, liability was low, and guys were crazy. Anymore, with the way liability is and the way crop insurance is and the accountability for pesticides, going hand in hand with the cost of the airplanes â€” $1.3 million â€” you just donâ€™t go out and do crazy stuff in a million-dollar airplane.”

Morse said the flying changes throughout the year as crops are planted, then mature, are harvested, and fields are prepared for fresh plantings. 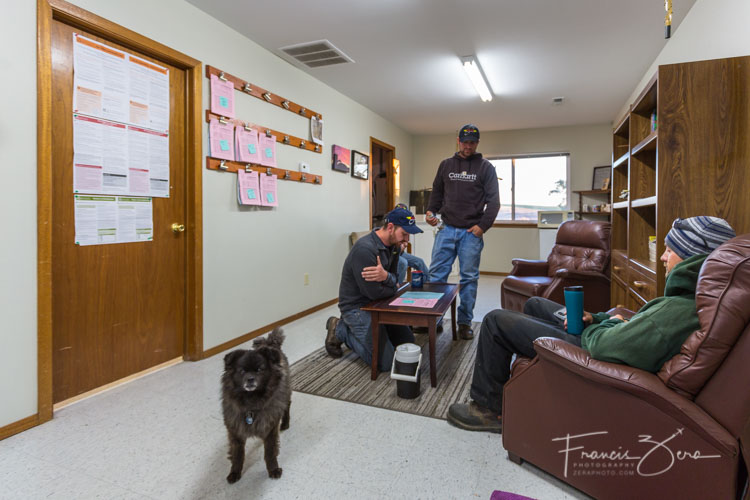 Morse and his wife Erin Morse make work packets the night before for the pilots and loaders for the next dayâ€™s work, saying it’s essential to have everything organized in advance.

“Weâ€™re flying off of four different airstrips – it can be a bit of a logistical headache,” he said. 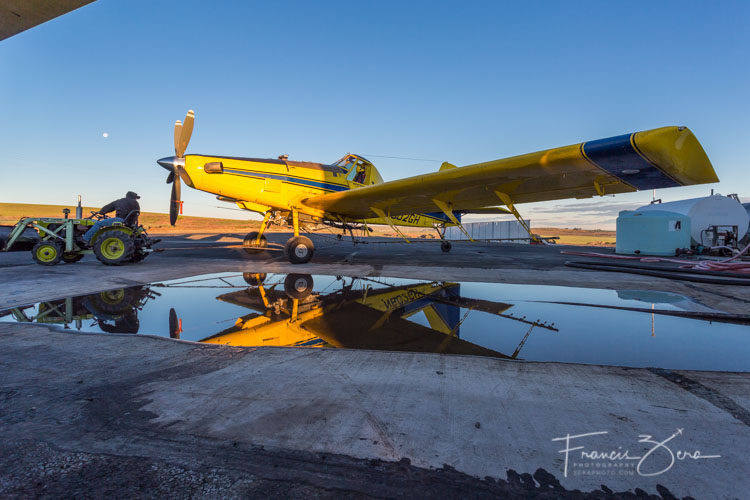 “We follow the sun and start at 4:00 in the morning in the summer,” Morse said.

“Everybody gets their packets, goes to their respective locations, meets their loaders, and tries to get as much done as possible until the weather changes or the wind shifts, because we need to work with the wind so things donâ€™t drift,” he said. 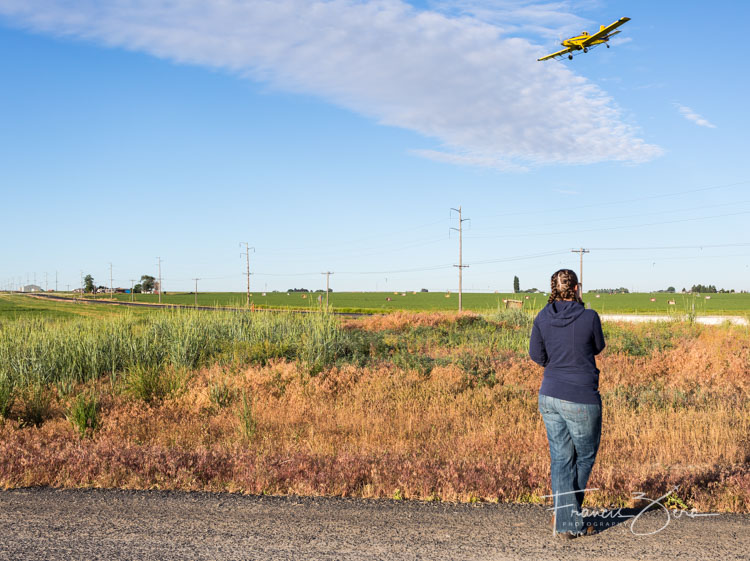 Erin Morse watches as Gavin Morse, her husband and business partner, lines up on a field to start spraying

When applying chemicals, be they pesticides, herbicides, or fertilizers, whether they’re organic or traditional, it’s essential to keep the spray within the bounds of the assigned field.

“We canâ€™t do anything thatâ€™s going to get us sued, which is a real possibility if weâ€™re not paying attention to the laws and agencies,” he said. “The Washington Department of Agriculture, the FAA, the EPA â€” there’s umpteen agencies watching us, so every move we make is based on a methodical, laid out plan on how to spray that field,” Gavin Morse said. 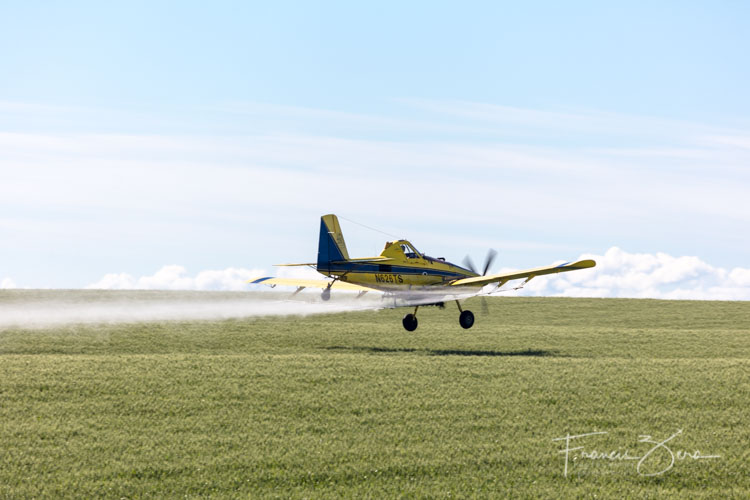 Flying low over the crops helps reduce the drift of the spray. And it’s very cool to watch.

Which leads to his least favorite part of the job – the ever-present knowledge that one small misstep can lead to a lot of harm.

For example, Morse said that “if youâ€™re spraying and are not paying attention to whatâ€™s going on behind your airplane, and you drift over someone elseâ€™s field, you can wipe that crop out â€” it can get really messy really quick.” 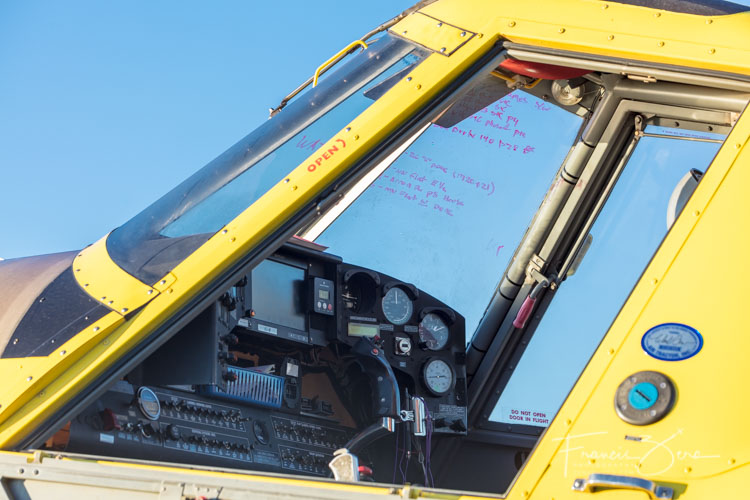 Morse said he likes to write each day’s spray plan on the cockpit window with a grease pencil.

He said the stress of making sure things like that don’t happen is enormous, so being methodical is essential, even if it means waiting two weeks or more for the winds to be just right for a particular spraying application.

“Itâ€™s amazing how many applications are made in the state that are perfect â€” it’s incredible to me how good everyone is â€” every single crop out there is getting sprayed, whether it’s organic or conventional, and it has to be done right, and it’s amazing to me how few problems there are,” he said.

Beyond having excellent flying skills and an intimate knowledge of the land over which they fly, ag pilots also need to have a solid understanding of the local farming practices and chemicals they’re applying. “That’s almost 90 percent of the job,” he said. 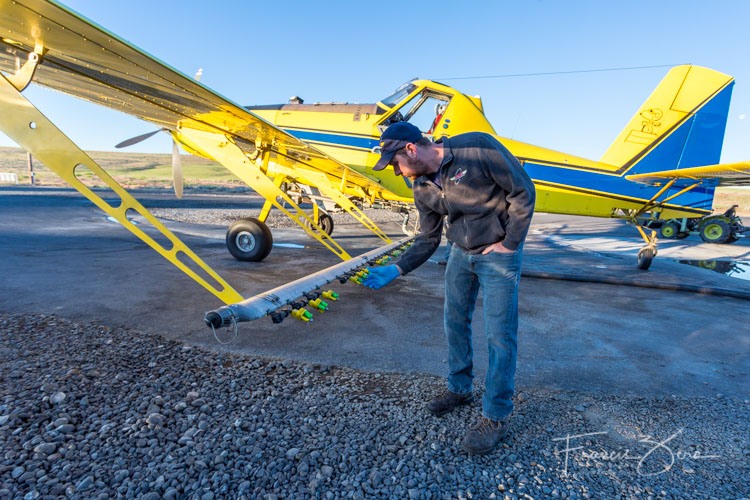 “The biggest thing is how to control the spray behind you so that all your chemicals stay in the field, and there’s a lot of tech in the cockpit to help us do that â€” the nozzle tech we have now is phenomenal,” Morse said.

Those careful plans also equate with efficiency. “Weâ€™re fast, weâ€™re burning less fuel, and weâ€™re not touching the crops and spreading diseases or compacting the soil like a tractor would,” he said.

Ag pilots also get paid by the acre, not by the flight hour. “So, if the money handle (thatâ€™s what we call the spray handle) isnâ€™t on, weâ€™re not making any money,” he said. 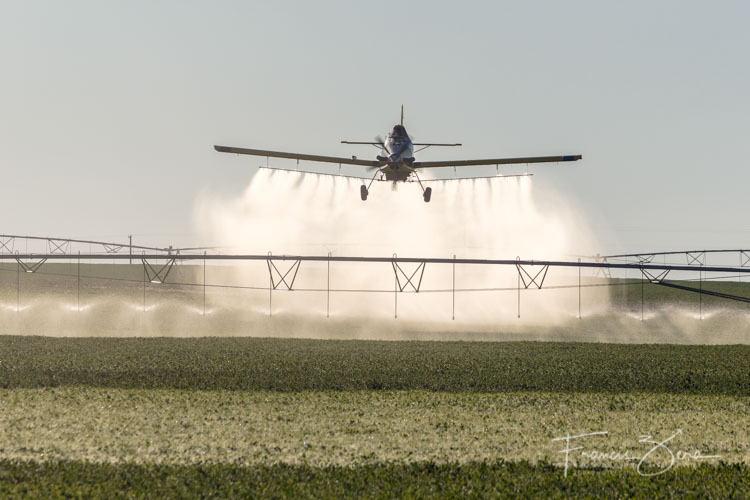 “The thing I love the most about it is at the end of the day I can look around and see that Iâ€™ve done something tangible.Â Some of these crops actually require an airplane, like potatoes, where you canâ€™t drive over them after a certain point without ruining the tubes. We can do 2,500 or 3,000 acres of potatoes in a day â€” we’re helping make sure that food is going to get somewhere and do someone some good,” he said. 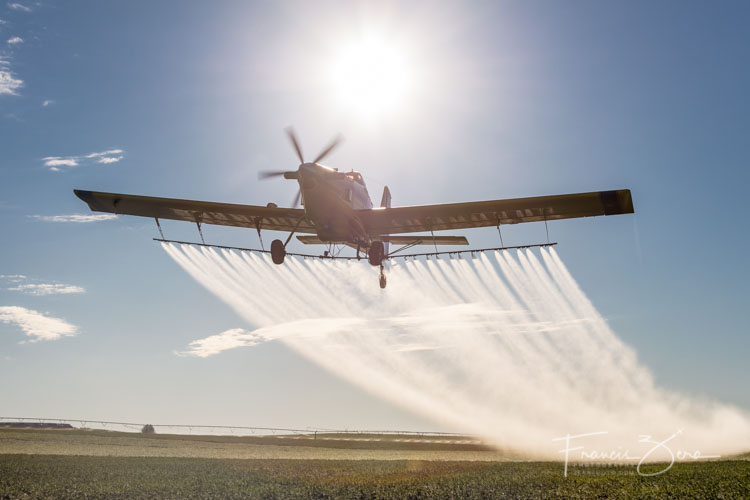 Morse said that what he loves most about this job is that the planes are fun to fly. “Youâ€™re actually flying the airplane; thereâ€™s nothing controlling the plane but me, itâ€™s just stick and rudder, tried-and-true old-fashioned flying.” 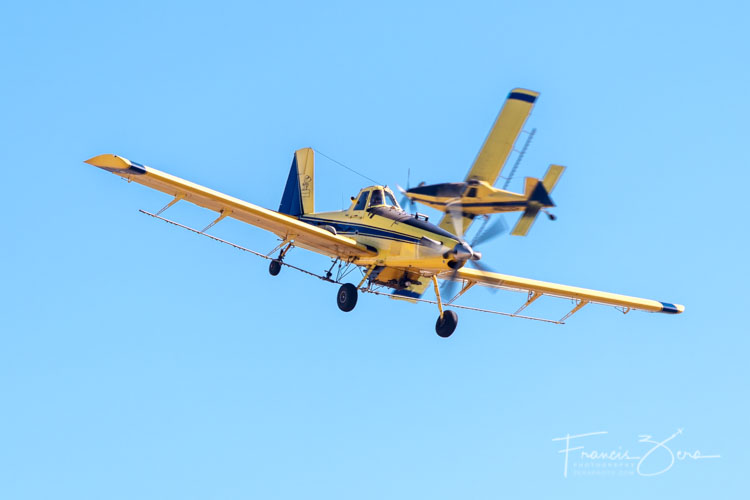 Watching all this from the ground, and learning about what it takes to be an ag pilot, filled me with admiration for these folks. My chief lament was that Morse’s planes are all single-seaters so none had room for a passenger.

This would be fun as it’s “real” flying.

Too bad it is going away with precision application of chemicals using drones.

I would like to see that! You will have so many Application Claims! Hah!

Thanks for the great and interesting article Francis. I learned a few things not previously known. While Ag spraying is necessary, I worry about the career-long exposure the pilots and loaders are subjected to. Some of the chemicals used are rather benign, but others are extremely toxic. No matter how careful those folks are, a certain level of exposure simply cannot be avoided. One or two hits may not cause any real harm, but I worry about their exposure limits over a period of years or decades. I KNOW that they are extremely careful, follow extremely strict rules and protocols, but those systems are not perfect. Ag spraying is an AVGeek occupation that I would never to, under any circumstance. Again, a great article.
-C.

Great article. Called Top-dressing here in NZ; but theres an equally rich history here around using everything from DC-3s to Tiger Moths & eventually the Fletcher for taming the ‘high country’ of New Zealand. Incredible pilots who fly in this industry.

Mr Smith- Have no worries, drones are a long way from ever replacing ag aircraft with their real live pilots. Itâ€™s mainly a demand/logistics/cost issue.

Mrs/Mr Cook – Also no need to worry about our exposure to chemicals. Iâ€™ve been in the busimess as an ag pilot for well over 40 years, as our medium age experience is over 30 years and our health issues are no different than the general population. Actually, the LD50 (lethal dose) for the vast majority of our chemicals is less than or approximate to what you buy at the hardware store. It used to not be like that, though, 20-30 years ago; much tamer chemicals used today.

Mr. Zera – Thanks for the great and postitive article. Much appreciated.

Thanks for the kind words, everyone. It was a really fun story to write and photograph, and I definitely learned a lot, too.

I live in the central valley of California and we have dusters like these here and they always impress. I can’t believe they even work at night, in the dark with large spot lights in the fuse and wings.

With Mr. Zeraâ€™s permission, I can provide this thread with a website address I own that is exclusively ag-aviation where you can read more about the industry.

Sure thing, Bill, please share, and thanks very much for asking first.

Thanks for the interesting article on crop dusters. We have one that flies around here in summer in eastern Wisconsin. I think those pilots are fearless and I always look forward to the free air show.

Hello:
Wonder if you can direct me to an airline attendant Blog site. I have a rental
for attendants and would like to post my AD
Many thanks, Constance

Great article! Well written, and the photography is fantastic. With over 35 yrs. in the business, this article was spot on. Thank you Mr Zera.