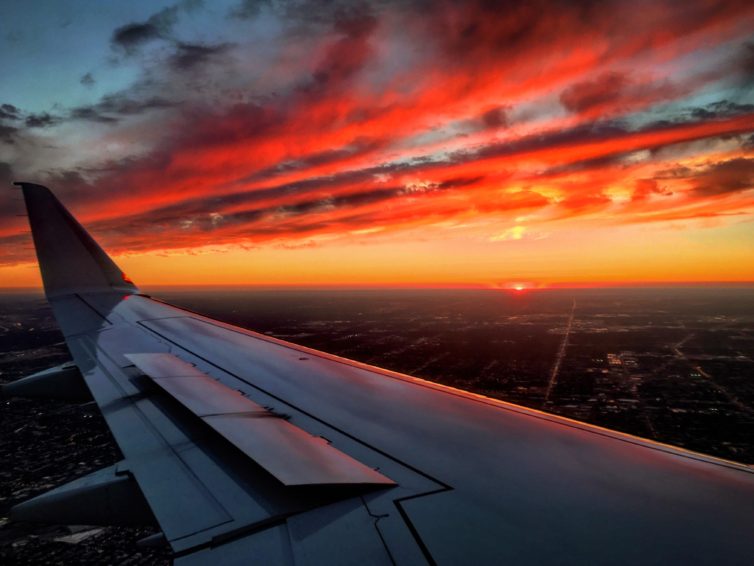 The artsiest window seat picture I’ve got (admit it, we’ve all tried something like this). – Photo: Jake Grant

There are many programming languages out there, as my computer science major friends would tell you. Perhaps you’ve heard of a few notable ones like Java, Python, and C. This past semester, I took a class solely dedicated to MATLAB, which is has a reasonable claim to be the worst of them all. A glorified calculator, MATLAB is good for matrix multiplication and approximately nothing else, in my humble opinion. How does this relate to aviation, you ask? Good question! 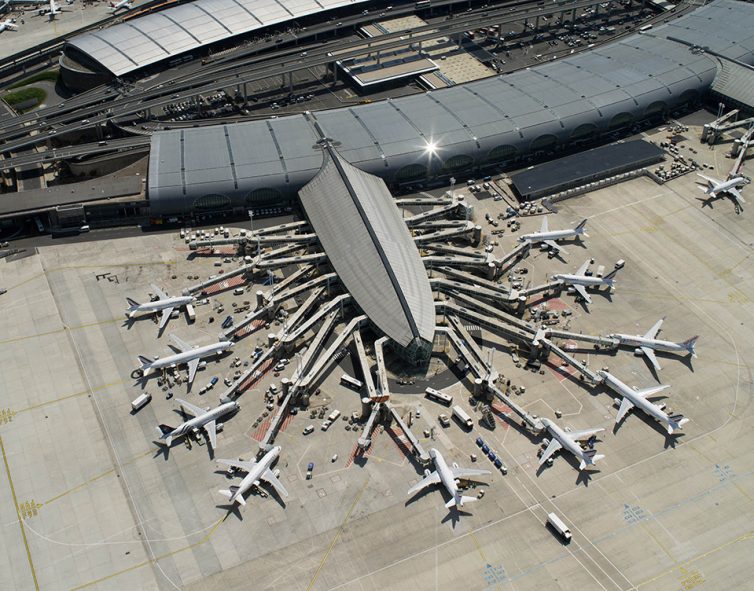 Basically, this had to become code CDG – Photo: Air France

In this class, a series of coding puzzles, we messed around with web APIs and other applications. Thatâ€™s where the planes come in. Naturally, I decided if I had to do a convoluted project, I would do it about something I actually liked. I took my programming language to flightstats.comÂ and started digging. 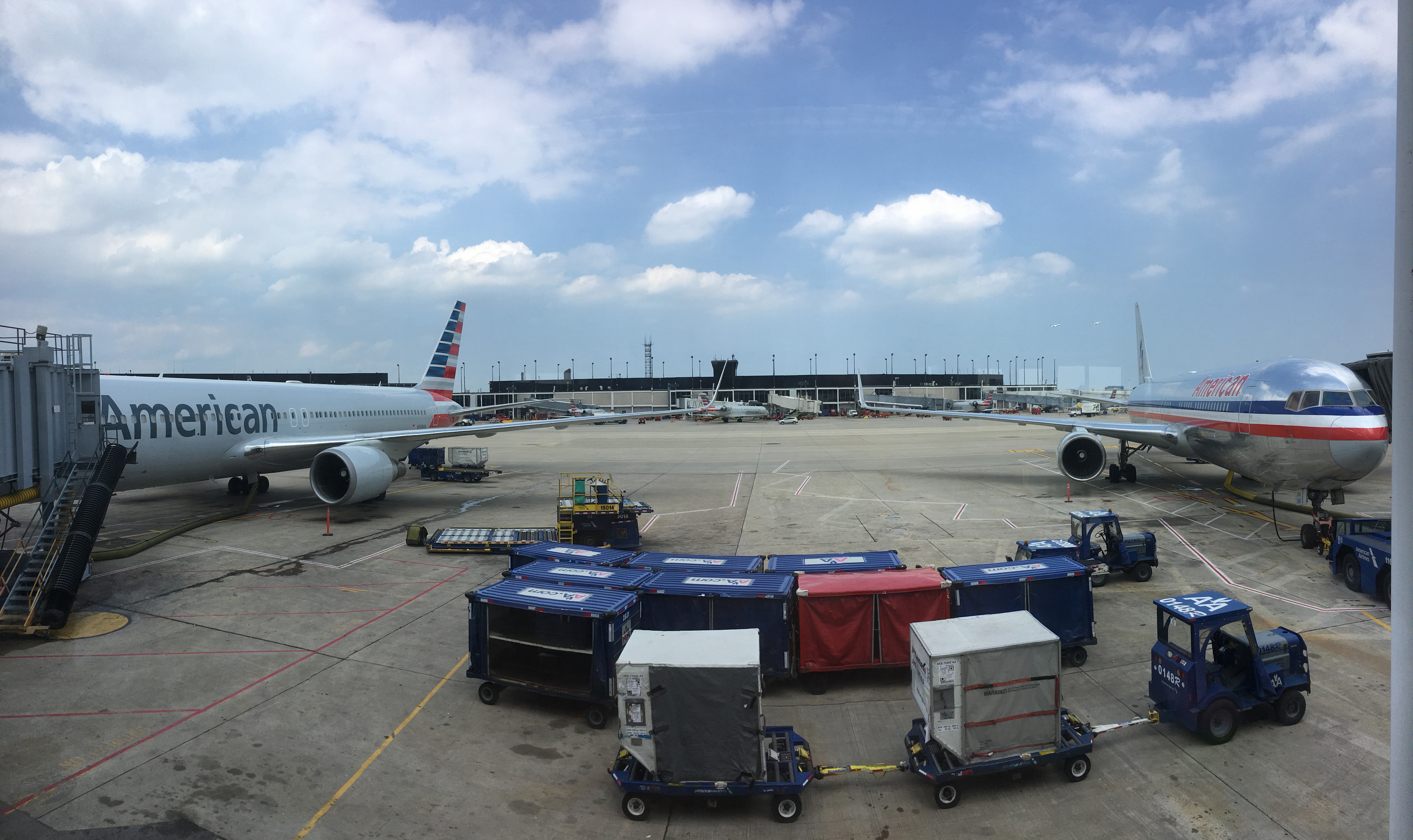 The plane on the left is going to Paris, the one on the right to Miami. Hopefully they don’t mix up all those bags! – Photo: Jake Grant

I jumped into airline scheduling. I figured it was straightforward: plane arrives, lets people off, lets people on, plane departs. Rinse and repeat. At a tiny outstation like Green Bay or Kalamazoo, sure. Planes come in from Chicago, Detroit, or Minneapolis, then they turn around and go right back. The project idea was gift-wrapped: make some Flight Information Display boards for tiny airports, and that was that.

Thatâ€™s when the professor took the project, threw a wrench into it, and handed the mess back to me. The project had to be dynamic. Shoot. Thatâ€™s hard.

Letâ€™s start with United Airlines at Chicagoâ€™s Oâ€™Hare International Airport. On any given day, hundreds of flights leave Chicago bound for every corner of the globe: Hong Kong, Sao Paulo, Albany, you name it. And every day, each one of those comes back. Obviously, being an airline, theyâ€™re going to have those flights fly pretty much every day, usually more than once. And they all fly another leg after that, and so on, or so the theory goes.

Across an airlineâ€™s network, especially one of the vast web of routes spanning the globe that each of the U.S. Big Three operate, each route has its own frequency and span. Each operates with different equipment based on time of year, day of week, or time of day. Weather, from snow in Anchorage, to heat in Phoenix, can delay, or, in the case of favorable tailwinds, speed along, a flight. Thus, airline operations, at the most basic level, require taking a vast multitude of variables into account. The original theory only accounted for one variable: is a plane on-time or not? 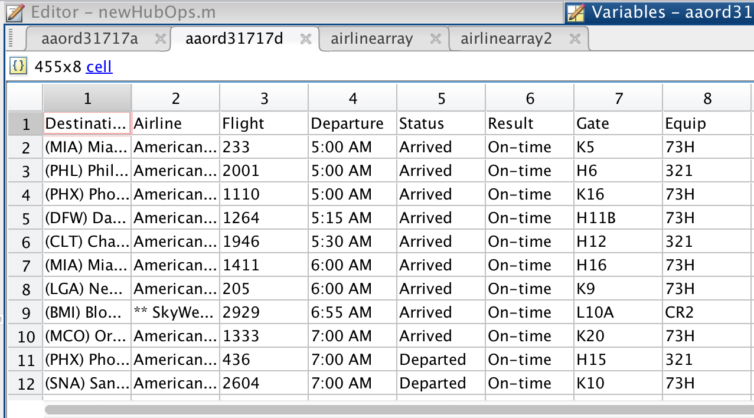 The original project – Step One: When are planes coming and going? Step Two: Are they on time? You have a (possibly barely) functioning airline – Image: Jake Grant

The vast majority of operations can be staged down to the placement of office supplies in the back closet. However, a not-insignificant portion, irregular operations, by definition, cannot. Just as an airlineâ€™s fleet and route planners cannot account for the exact price of oil, exchange rates, or economic conditions long into the future, operations managers similarly cannot predict exactly when, where, or how severe an irregularity will be. A single diversion can have shockwaves that reverberate across the network. Thatâ€™s the very definition of a dynamic business at work.

So how do airlines account for these facts of life? Thatâ€™s the same challenge we faced in taking our program from a glorified departures and arrivals board to something that determined if airline resources were being used efficiently; in our case, how airlines used their gate space. (In the United States, at most airports, airlines lease gates rather than share and pay on a per-usage basis). Thatâ€™s the rub, though; itâ€™s extremely hard to define exactly what an efficient, or a well-run, airline is. It really depends on airline philosophy.

Take American Airlines, for example. Since their merger with US Airways, famously creating the largest airline in the world, they have pivoted their operations strategy towards a laser focus on â€œDeparture-0,â€ or D0 time. In other words, they have decided that a flight that leaves the departure gate on time will arrive at its destination on time. Obviously, this cannot always be true, due to weather, diversions, clogged taxiways, and whatever else crops up along the way. Every airline â€œpadsâ€ their schedule to an extent, adding a small amount of buffer time on each end of the schedule, longer than the actual flight time, in order to account for those inevitable variables. 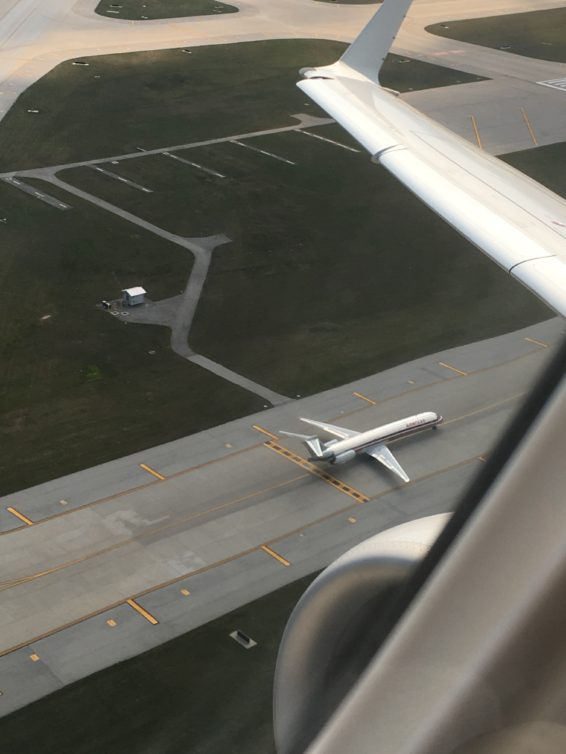 Sometimes, you’re just 18th in line on the taxiway, like this poor flight – Photo: Jake Grant

Therefore, each airline inherently defines their operational success a little differently. Unlike airlines that focus on on-time arrival, defined as within fifteen minutes of scheduled arrival time, an airline that focuses on departure could call a larger amount of late arrivals a success than that first airline, based on strategy alone. But that still begs the question, the one behind our projectâ€™s quest for an â€œefficientâ€ airline: what exactly in an effectively run airline?

Itâ€™s not an exact formula. It takes x gates, y planes of z types, with a crews of b people in c airports across the country. For example, we’ll look at American Airlines at Oâ€™Hare on a Friday in April, the dataset with the least irregularities. The airline rented 67 gates from the Chicago Department of Aviation. Planes from the regional 40-seat Embraer 140 to intercontinental Boeing 787-8 Dreamliner flew over 500 flights with thousands of crew hauling even more passengers to 102 airports around the globe. They accounted for a gusty wind out of the northwest, not quite perpendicular to Chicagoâ€™s primary flow East-West runways, of which there are now five, and steady rain in the afternoon. One flight diverted on the East Coast, where the rain was stronger and the airspace busier. All in all, an average day.

Iâ€™m not privileged to information on maintenance and crew, but they play roles as well. The plight of the operations manager: everything must flow smoothly, but it is impossible to know exactly where or when the airline will face trouble next. The operations department has to keep the airline running as smoothly as possible, regardless of the dilemma. They are often the last praised when things go right and easily criticized when things go wrong.

As travelers, we only see a small snapshot of an airline every time we fly. A plane flying from Atlanta to Chicago, a route I know well, could arrive from Denver, Houston, Newark, or Washington, D.C., if youâ€™re flying United (and on Delta, it could come from literally anywhere!). Or, of course, it could come from Chicago. Operations departments not only account for flights out of hubs, but how each one of those turns at each outstation. Itâ€™s why a Southwest 737 and its crew could theoretically start the day in Islip, bounce through Baltimore, down to Orlando, change crews at Chicago-Midway, head to Kansas City, then Las Vegas before settling down in Houston for routine maintenance and a well-deserved break. Even the rest is coordinated.

Meanwhile, Iâ€™m just thankful if I get a window seat and a ginger ale. Everything else is far above my pay grade. Oh, yeah, I almost forgot, the flight gets catered, too. The most important part, of course. 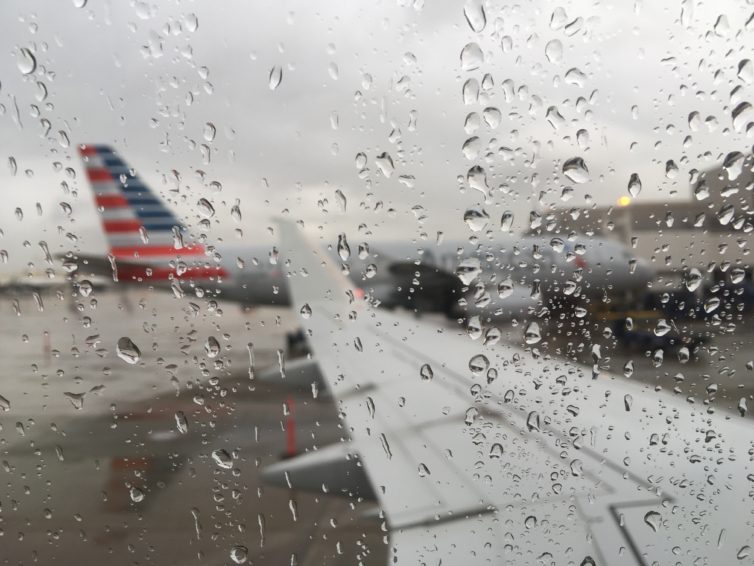 Luckily, the rain only led to a 10 minute delay, because each one has ripple effects. – Photo: Jake Grant

In the end, I got an A on the project. The professor liked it well enough, but he’s not as into the industry as some, despite his outdated metaphors comparing efficient code to American not painting its airplanes. I’ll take doing something I wanted to do over getting extra credit for doing something else. It was worth it: a nice detour into the hectic world of airline operations.

CONTRIBUTOR - ATLANTA, GA Jake is an Atlantan by residence, Chicagoan by birth, engineer by trade, and an aviation geek at heart.

Great article on airline schedule. It is a very complex problem that does not lend itself well to a nicely packaged solution. I currently use a discrete event simulation application to attempt predict network reliability by adjusting a whole whack of parameters such as block time, turn time and schedule. The airline I work off measures success in terms of A-15 or arrival 15. We run and a whole bunch of scenarios to predict the performance of the network. Often things you think will work don’t work and things that you think don’t work work. Not straight forward as one thinks.

Nice piece. I look forward to more from you, Jake. Best luck in your studies,

Thanks, JL! I appreciate it! Love your work; your article on KCI Terminal A last week was fascinating!

“The operations department has to keep the airline running as smoothly as possible, regardless of the dilemma. They are often the last praised when things go right and easily criticized when things go wrong.”

Truer words have never been spoken! Thanks for a great article.