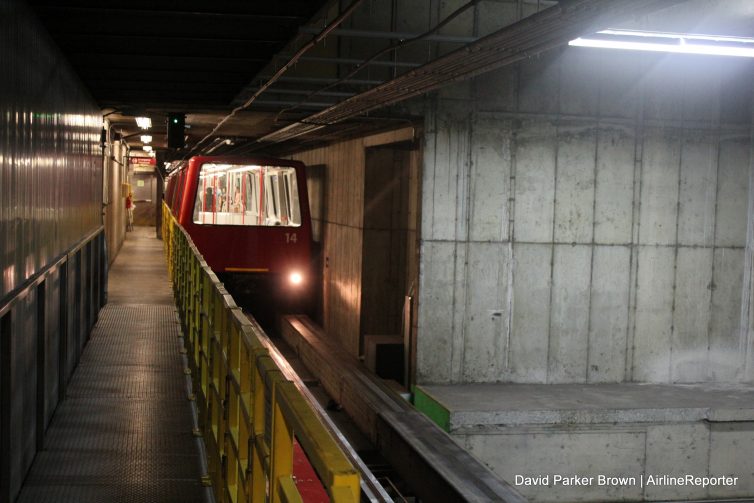 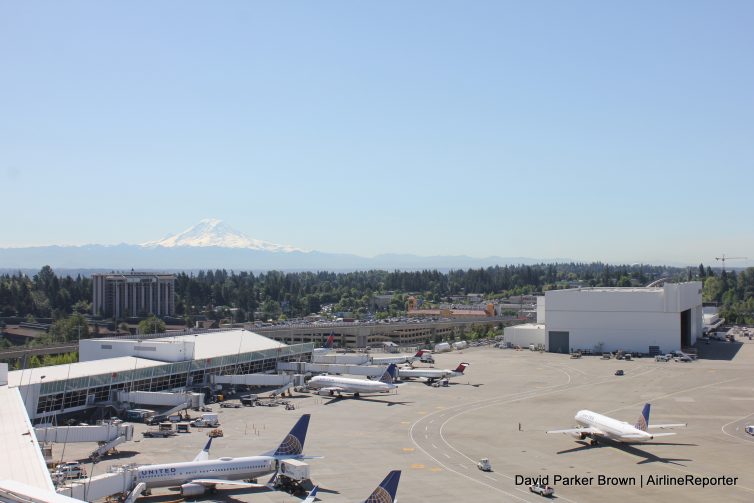 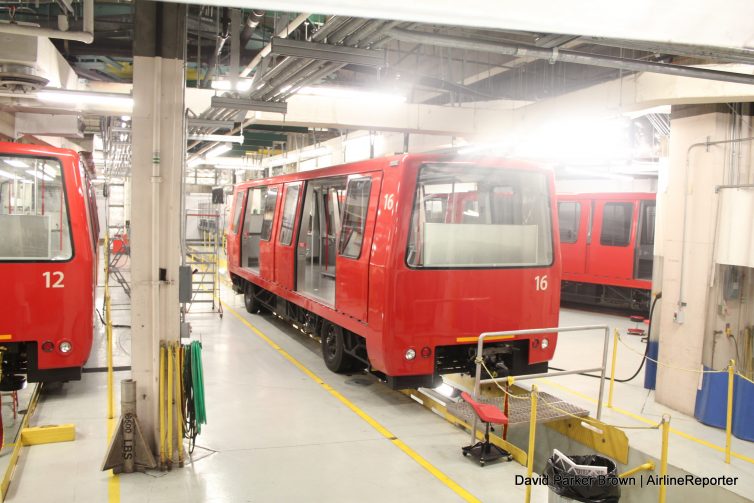 A few of the trains at SEA are getting some TLC

Train, tram, shuttle. Whatever you want to call the thing, there are similar people movers at airports around the world. SEA calls theirs a ’œtrain’ and they have quite a few reasons to be proud of the operation. And they get operated quite a bit — the airport sees about 43 million passengers per year and the trains carry about 16 million of those. 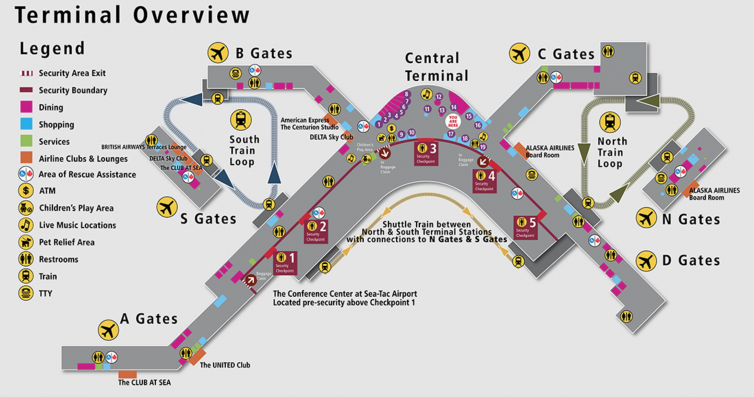 Map of the airport, showing the train routes – Image: SEA

For those of you not familiar with Seattle’s airport, there is the main terminal and then north and south satellite terminals. There are three train systems that help connect them all.

Since there is really no other way to get from the main terminal to the satellites, it is vital to keep the trains running at an optimum level and they do. The system has a 99.9% uptime rate —  compare that the reliability of even the best airlines. When the trains do go offline, they have enough stored power locally to get passengers to the next station. If they cannot get the trains running again in a timely manner, they will break out the buses to get passengers to the satellites — but that hasn’t happened since 2006. 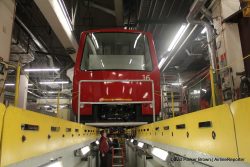 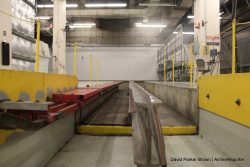 Turn table to get trains from main line 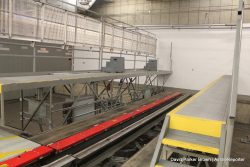 The trains pull in to start work 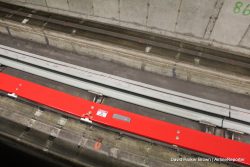 If track maintenance is needed, they do it in the middle of the night. That is becoming more difficult, as SEA increases the number of flights in the wee hours of the morning. Sometimes they will have to operate with just one train per segment and put them in shuttle mode (be prepared for delays on those days).

The first train system was installed 43 years ago. Since then, it has become the system that others (even non-airports) want to emulate. The first system came from Westinghouse, but in 2002-2003, it was all updated to Bombardier. Yup. Bombardier trains working the Seattle airport, home of Boeing (yeah, yeah, it is headquartered in Chicago, but whatever). 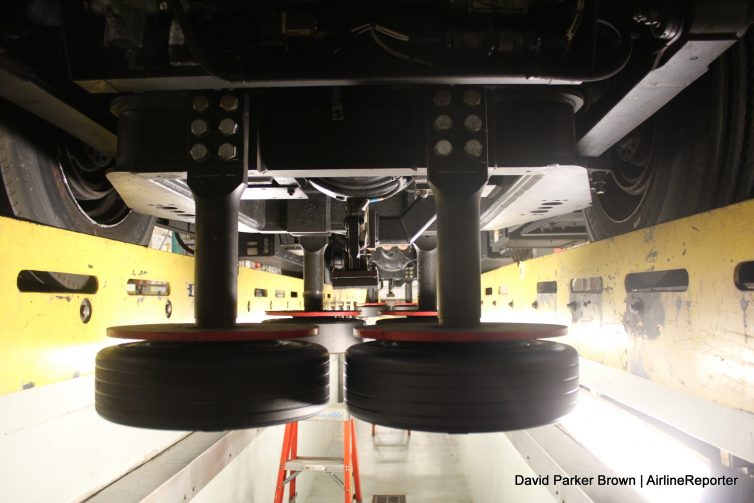 These are the “wheels” that make the train go

I wasn’t sure what to call these things. I had always called them a ’œtram.’ The official outward name is ’œsatellite train system.’ To those who work on them, they have always been called a ’œtrain.’ This was a little weird to me, since they run on truck tires. Each car is attached to an electric rail that power electric motors that turn tires. Really, call them what you want, they are cool.

Actually, I did ask if they had fun nicknames for each car, but unfortunately they do not, they are just called, 1, 2, 3, 4, etc. I suggested that maybe the airport do some sort of social media naming contest, but that does come with some risks. 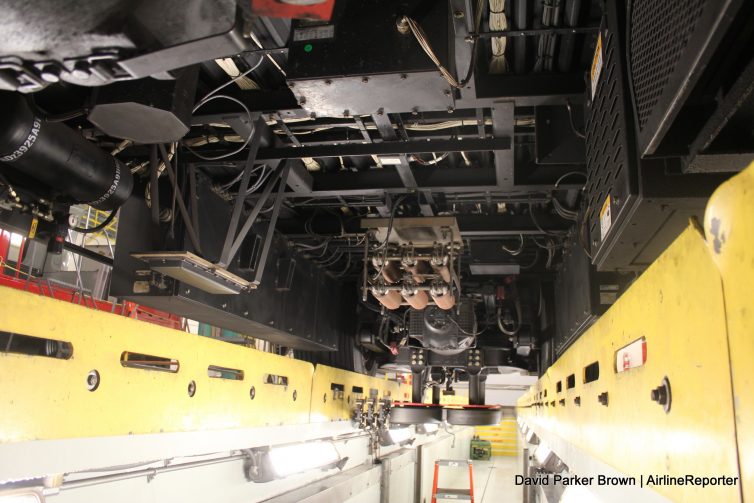 The underside of the train 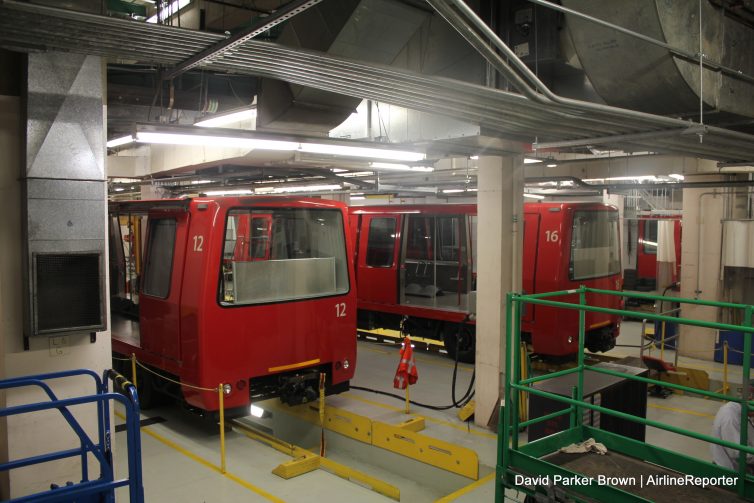 Trains being worked on 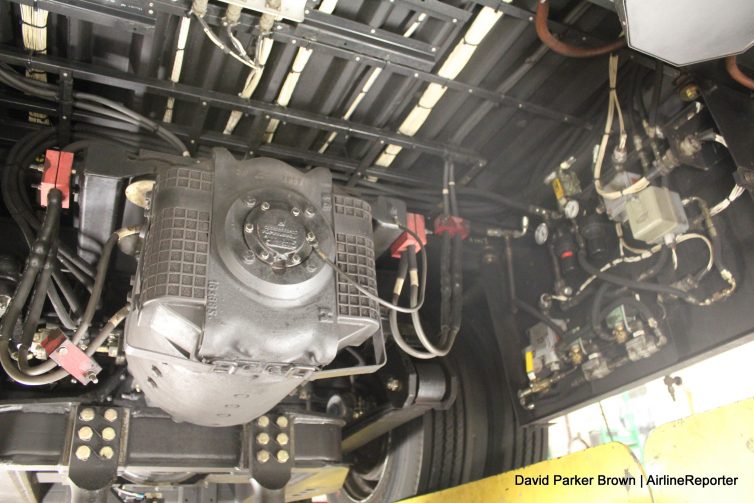 SEA does their own maintenance, which is not common (LAS is only other airport that does). This ends up saving about 40% in maintenance costs and it also means that they have a pretty slick setup to get the work done. They have 21 cars, where about 13 are in service at any given time. 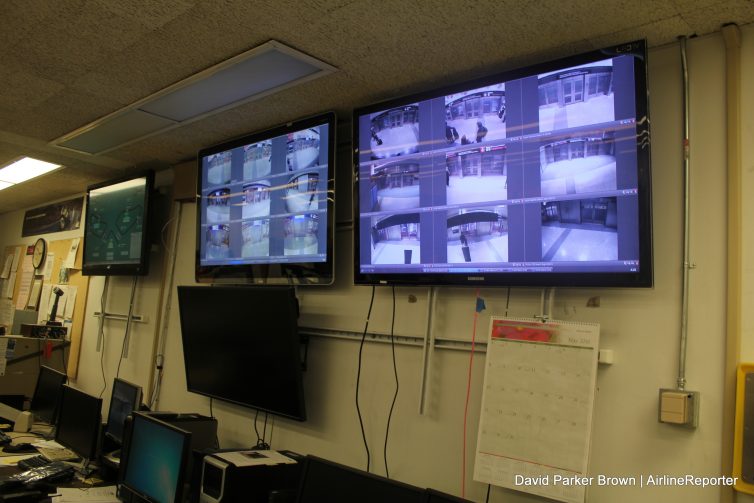 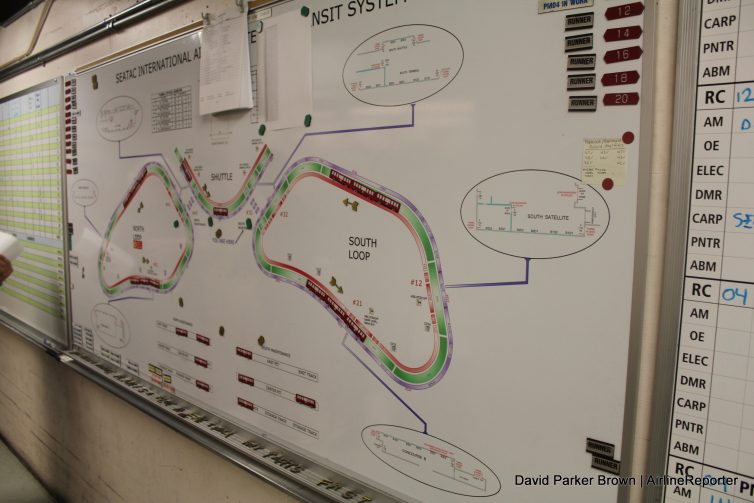 Normally they have a pair of three-car trains running a loop. To keep things moving, there is one large mainframe computer to manage the system. There is a lot of communication going on because the trains are talking to the system and each other. So, if someone holds open the doors too long on one train (you know who you are), the other train knows and slows down.

Talking about slowing down, they accelerate and decelerate at about 2 mph/second. They also have a max speed limit of 25 mph and will typically run between 18-25mph on the straightaways — yee haw! 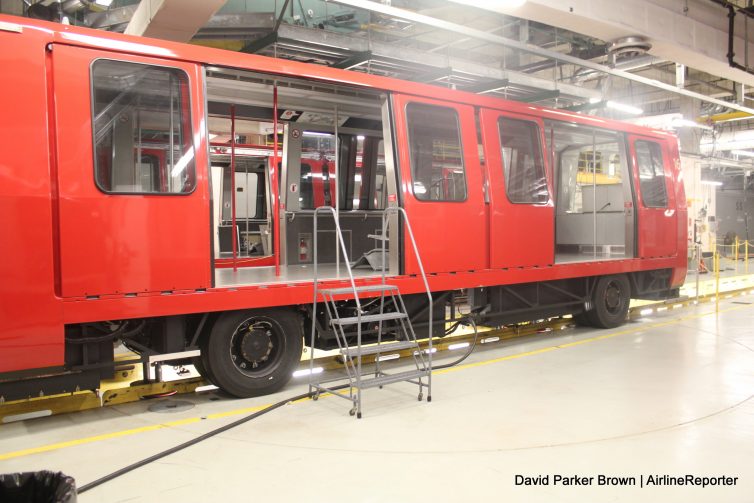 Shall we go in the train? 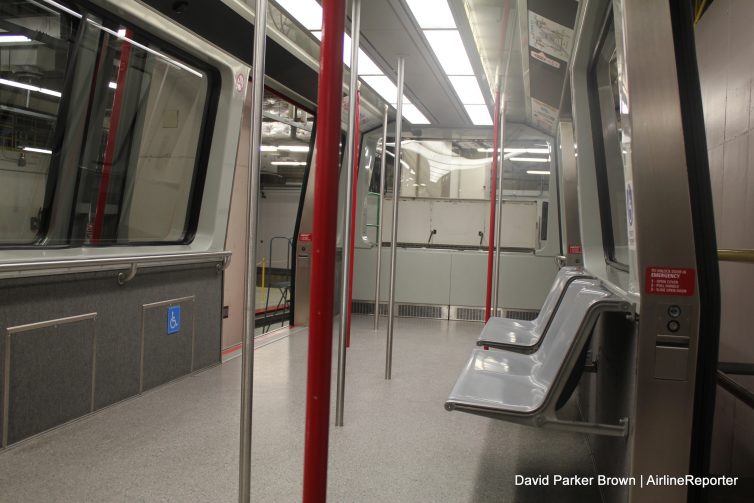 As we were almost done with the tour, I saw one car being worked on and the metal bins at each side were open. Despite all the miles I have ridden in those cars over the years, I have wondered what was in those. I couldn’t help but ask if I could take a look and luckily they said yes. It was actually cooler than I expected. It was a hodgepodge of different computers, that looked from different decades; lights, switches – it wasn’t sleek, but it was functional. 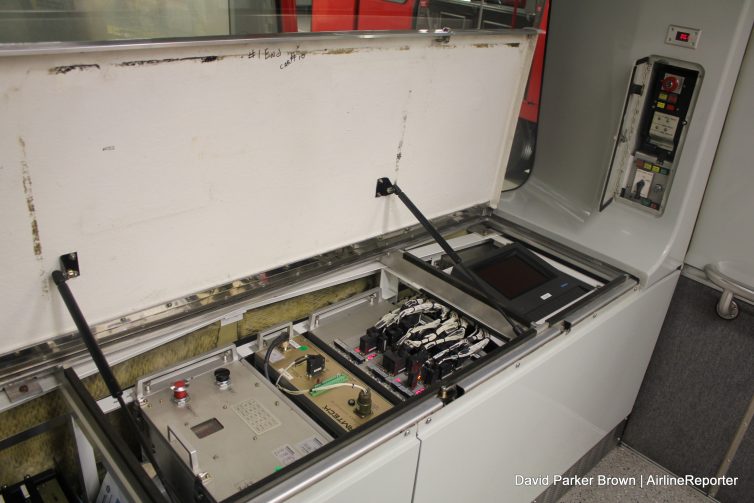 The computer system in the train 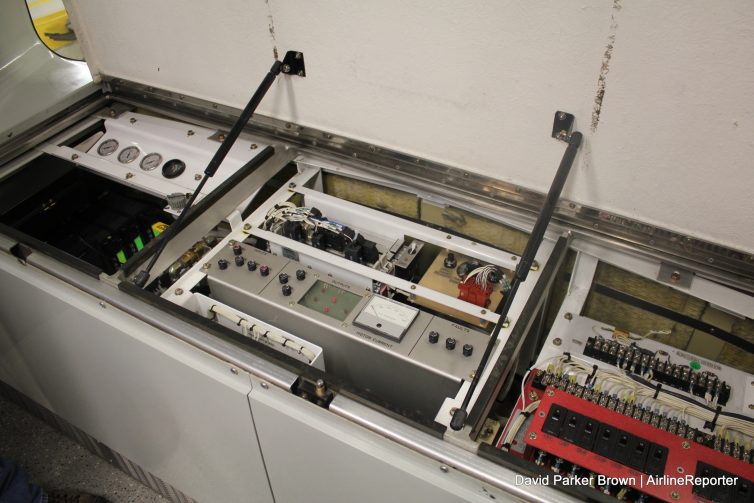 I wanted to make fun robot noises… but didn’t

I am always in awe how many different aspects it takes to make a travel experience work. And each one of those parts is complicated. We all can hop on and off these people movers without a second thought how important they are. But when they break down, or an airport doesn’t have them and you have to walk forever to your next gate, we miss them.

Do you have a favorite (mine is IAD) or least favorite (also IAD — we have a complicated relationship) people mover that you take? Share in the comments.

Since I was being toured around, I asked if I could get to some cool places for photos. They said yes. These photos really don’t have much to do with the trains, but heck, who doesn’t want to see more airplane/airport photos? 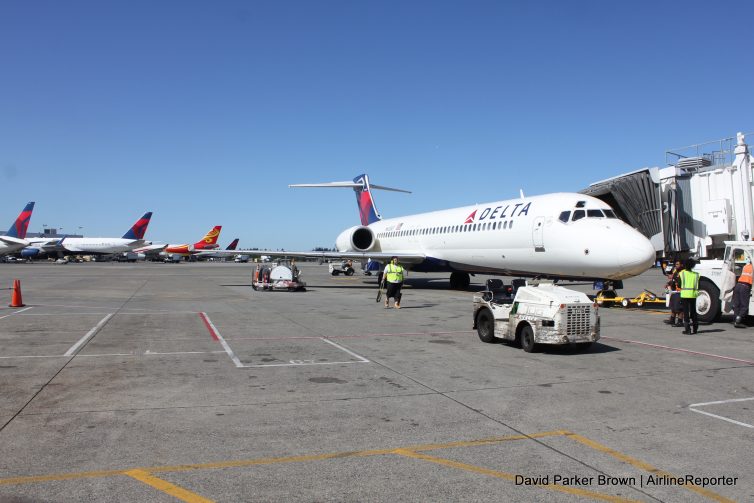 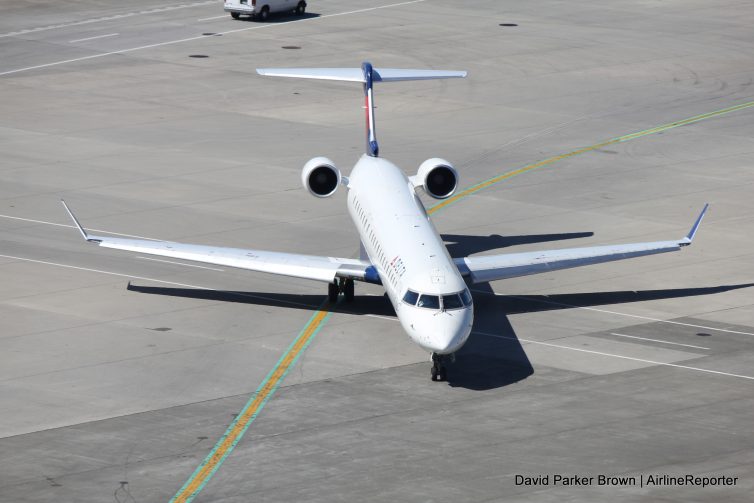 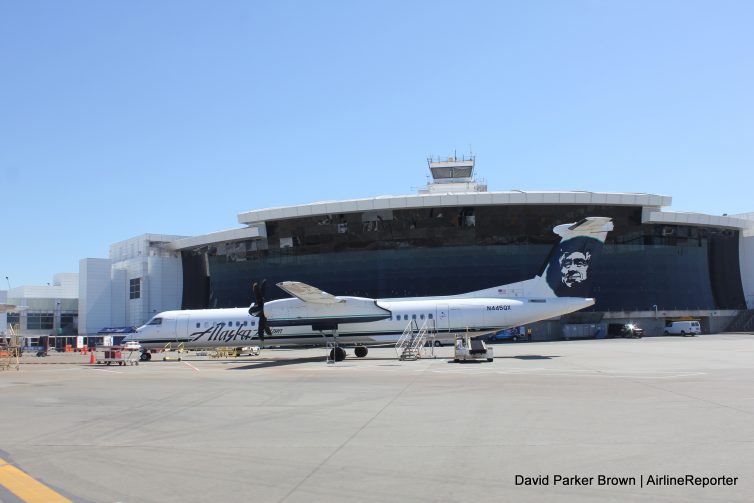 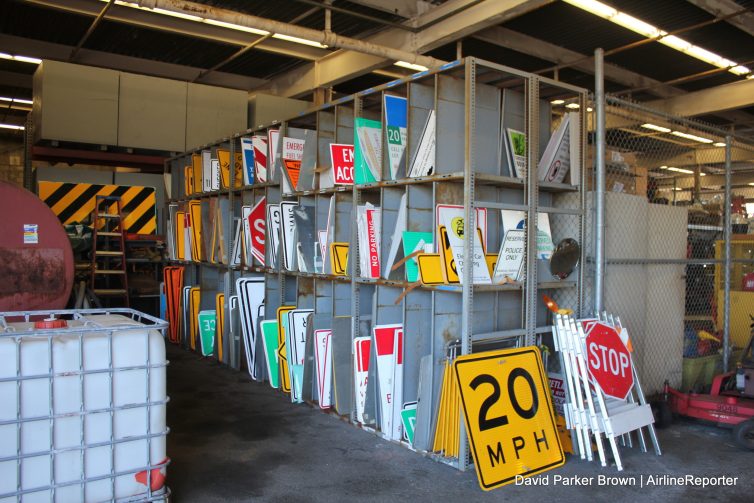 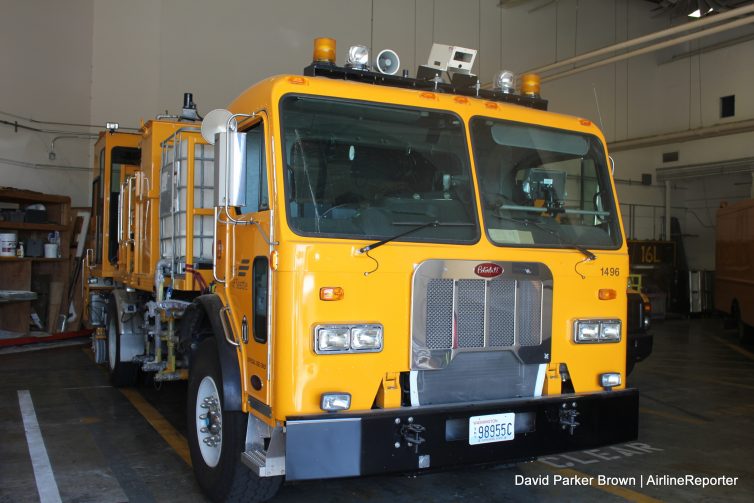 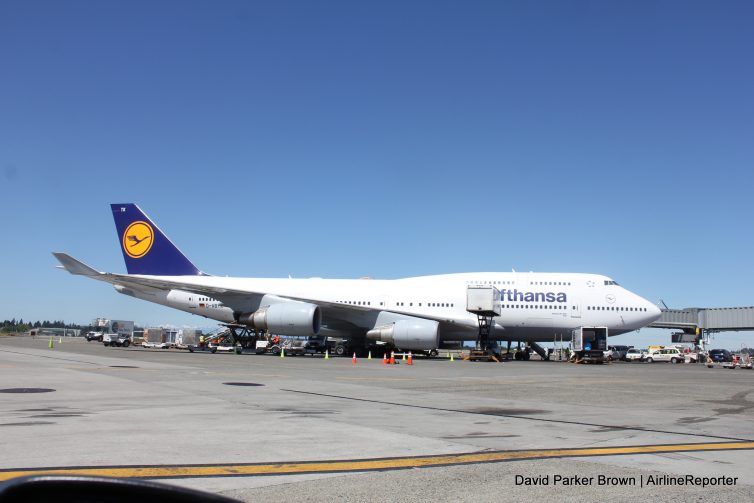 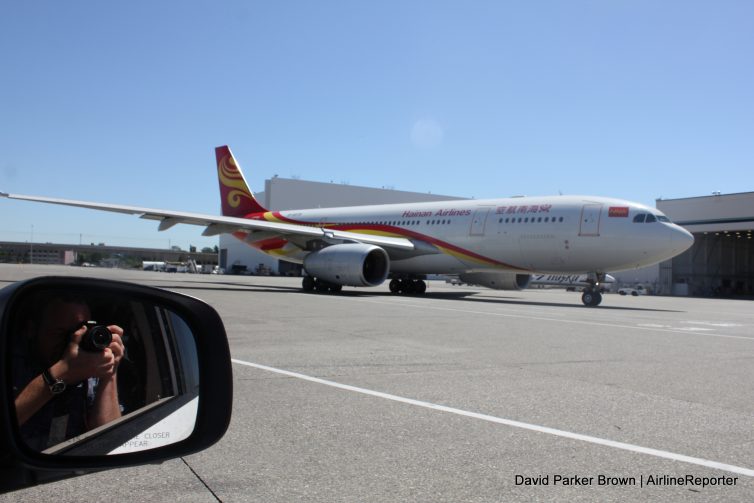 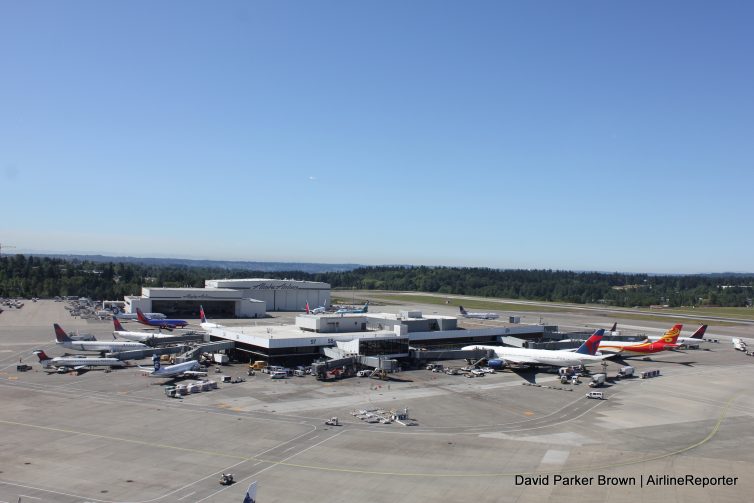 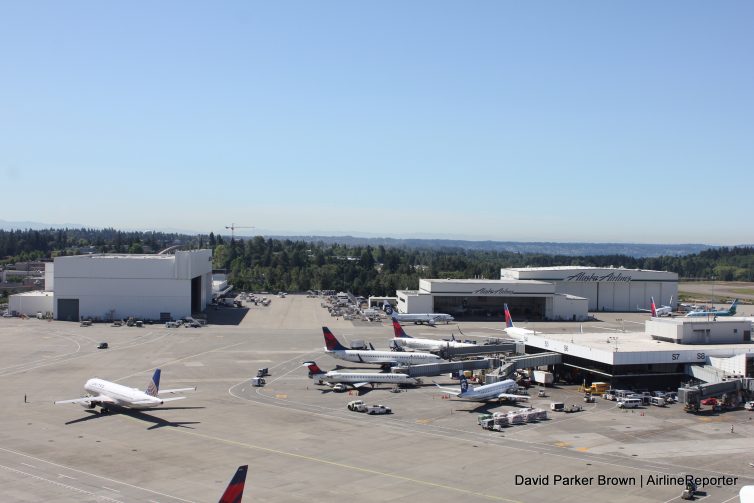 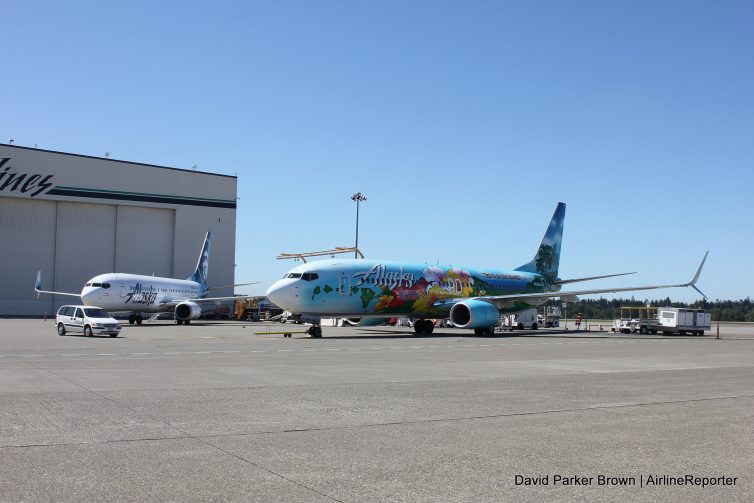 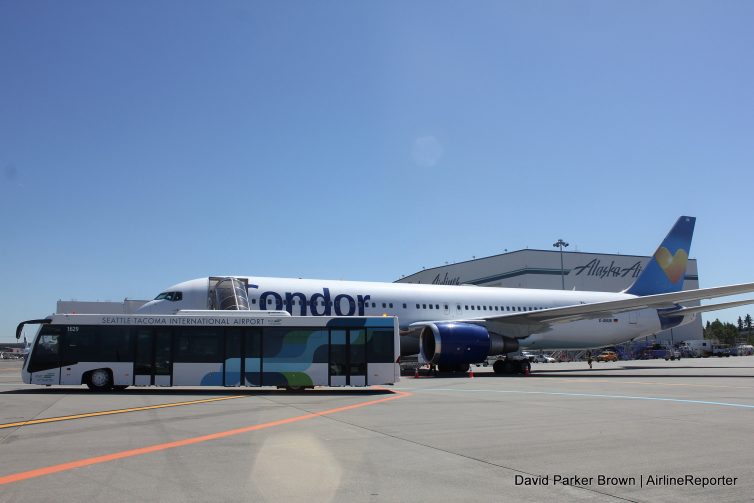 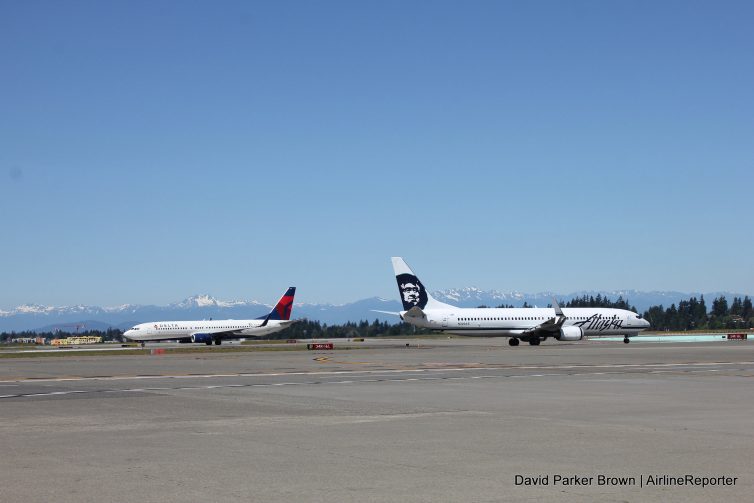 https://www.airlinereporter.com
The Queen of the Skies Still Delights on EVA Air
Upgraded on a Wing and a Prayer (and a Typhoon)
10 Comments

Great article David! I’ve always enjoyed the ‘train’ system at DFW as it provides a pretty good survey of all of the planes around the terminals! I used to travel YYC-DFW-DCA monthly when I was younger and that was always my favourite part of the trip!

Interesting. One thing I’ve always wondered about is why they kept three separate lines and never connected them into one loop. I suppose the terminals grew organically but still it seems weird to take 3 trains to get from S gates to N gates.

It warmed my heart to see this. I used to ride that train with my grandfather, Carl Griffin (Northwest Orient) just for fun.

I always sat upfront, on the metal box you showed. And I always struggled to not slide off when the train started moving. In fact, last time in Seattle, I did the exact same thing (35 years later) and an old lady laughed at me when I nearly slid off.

Great topic and a good read! About IAD…the ground shuttles or people-movers, though slow and obnoxious, especially after getting back from a red-eye or an overseas flight, never failed/fails to provide great views of the various aircraft on the ramp, especially the big ones like the South African A340, the 747s from BA, LH (and now the occasional A380), and of course the triple-7s and ’87s of UA, ANA, and the ME3. Like a quick moving tour of the ramp..

The newer underground train at IAD is great — quick and efficient, though sans airplane views. (Though it has great views up front and behind of the well-lit and newish-ly excavated and built tunnels, if one is into that.)

I ride the ATL “Plane Train” about twice a year & it is cool. Also the LHR train is good. AMS needs a train like put ASAP.

I like the train/tram at MCO. It’s clearly marked, and it goes through beautiful scenery with trees and lakes on your way to the satellite gates.

I also live in the Seattle area and find the train very easy and fun to use. However, I was part of that 0.1 percent of breakdowns once. I came back from KEF-SEA and disembarked at the South Satellite. The train system broke down; only one set of doors could open at a time, so of course everyone crowded around those doors rather than moving to the back (re: empty) part of the car so others could board. Then the train sat … and sat some more. When it finally did move, it was quite slow. It took over an hour for me to get from the South Satellite over to the arrivals/customs hall.

Other than that, it is and continues to be a great experience. I have an upcoming flight for Christmas. It is on Delta, so I’ll likely board in Concourse A and not have to ride the train.

Sea. Tac Is a wonderAnd the help so professional(cream of the crop). Just can’t wait to ride the train and proud to know the ground crew is at 99.9. Proficiency. Their dedication makes me proud to be American! Hats off men your doing a marvelous job

I too marveled at and looked forward to the trams at Sea-Tac. It was like a bonus vehicle on every cross-country journey, one that didn’t quite fit the precise definition of a train or bus. Add automation, a dash of my parents’ inability to adequately explain the vehicle, and it made for an exciting prelude to an exciting journey. “Everybody hop on the mystery vehicle before flying through the sky in a chair with a view!” my 9-year-old self would think. Pretty cool.

I remember judging airports based on the quality of the people movers employed, if any.

Thanks for the nostalgia trip!

I’d be really happy if they just named them “conveyance 1” “conveyance 2” and so on. Just to have that concept interpreted into a bunch of languages and slapped all over the vehicle. It might make a pretty cool wrap.