A beautiful day and location for a run – Photo: John Huston

It is said that if you’re running around on the fifth runway at Atlanta’s Hartsfield-Jackson International Airport (ATL) you’re having a very bad day. Either your plane has just crashed or you’re about to be arrested and sent to jail for a very long time. Or’¦ maybe there’s something else going on that has the makings of a very good day.

I had the opportunity to run The Mayor’s 5K on the 5th Runway at ATL on August 27. The race is an annual fundraiser for the United Way of Greater Atlanta, hosted by Mayor Kasim Reed and sponsored by Delta Air Lines among others. It’s the one day a year where mere mortals, like me, can be out there laying down shoe rubber in the same place where the big jets lay down tire rubberwithout getting arrested.

On your mark… – Photo: John Huston

This is the third year for the race. I hadn’t heard about it until recently, but once I did, there was no way I could resist the chance to participate.
There was one sort of catch, however. The race had to be over and the runway completely cleared by 8:00 a.m. You know, so the planes could land and stuff. Which means things began very, very early. 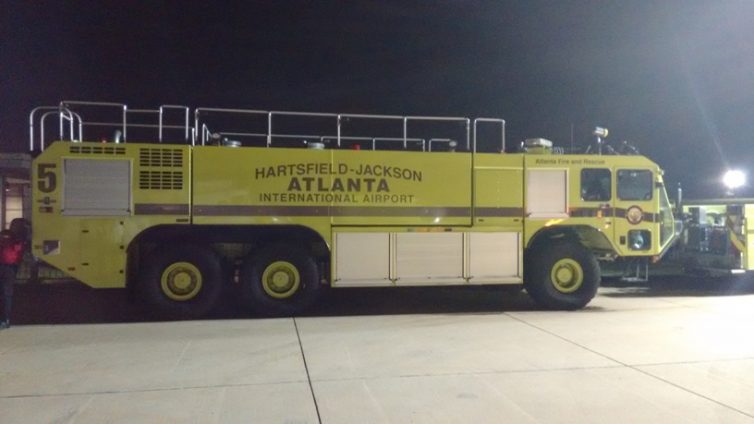 One of the emergency vehicles housed at Fire Station #33 at ATL – Photo: John Huston

I live about 30 miles north of ATL, so after a 3:10 a.m. wake-up and a quick breakfast, I hit the road and 45 minutes later pulled into the lot of the Georgia International Convention Center, just west of the airport. There I joined the line for the shuttle buses that would transport us runners the last few miles inside the fence to Fire Station #33 where the race lineup took place. We arrived on-site around 5:15 a.m.

And, yes, it was still dark out. The only illumination was from portable stadium lights on generators scattered around the vicinity of the fire station. After exiting the bus, we had to make our way through the shadows, down a small hill, across the drainage ditch, and along the driveway to the check-in area where we received our race bibs. There were about 2,000 runners participating, and most were arriving on the first wave of shuttles; it was a pretty busy scene. But check-in went smoothly and we moved quickly to our next stop: security.

I had read that we would be subjected to full-on TSA-level security, but the reality was much less involved. Empty your pockets, raise your arms, turn around. Thanks. Enjoy the race. That was it. Really just enough to make sure we weren’t carrying a bomb in our running shorts. Then it was through the gate, into the fire station, down the hall, and arriving at the holding area where we had about an hour’s wait until race time. 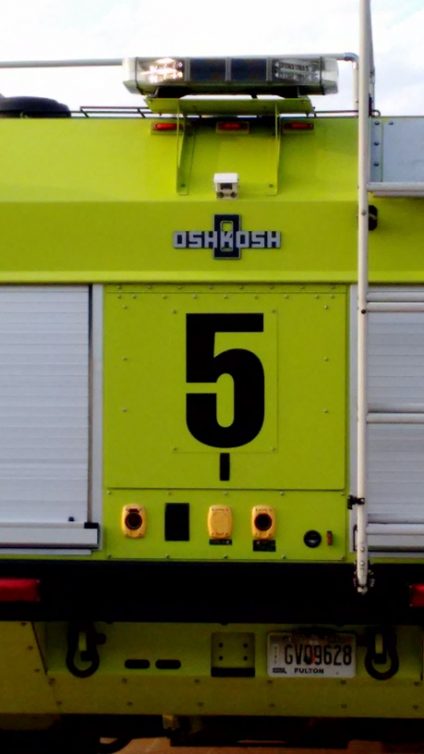 Although we had a clear view of the airfield, at this early hour not much was happening. Only an occasional plane landed. To make room for the crowd, the emergency equipment had been moved out of the station house. That gave us runners walk-right-up-to-it access to all the cool fire trucks and rescue vehicles housed there. We were free to take photos, sit on bumpers and access stairs, and peek inside as much as we wanted. I thought it was perfect that one of the firetrucks had been made by a company named Oshkosh. 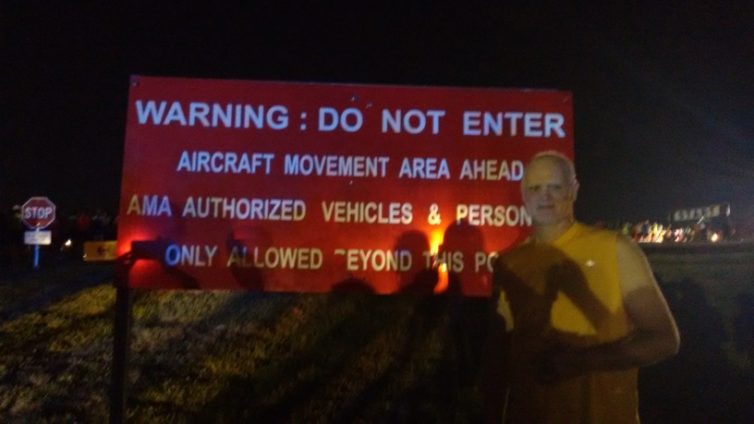 As we walked from the fire station to the taxiway starting line, dozens of runners bee-lined to this great photo op – Photo: John Huston

Finally, the National Anthem was sung and it was time to head out to the starting line on taxiway SG. Quickly, it became apparent that for a lot of runners’“ahem’“the event was more a chance to take photos than it was to lay down a decent 5K time. As the crowd moved, dozens of participants bee-lined to the large warning sign shouting DO NOT ENTER Aircraft Movement Area Ahead. ’œWill you please take our picture here?’ was heard repeatedly there and throughout the race. Directly next to this was another sign shouting Stop! Do Not Proceed. Contact ATC.

Once on the taxiway and after a brief speech extolling the good works of the United Way, we were off! 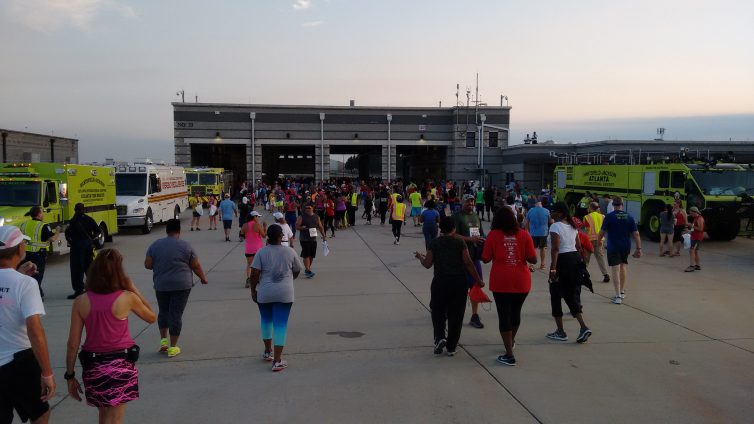 It was 6:45 now; far off to the right, the morning push was starting and we could see the lights of planes stacked three or four deep to land on runways 9R and 8L. A Korean Air 744 freighter arrived. I stopped frequently for photosI mean, how often do you get to stand against taxiway signage at the world’s busiest airport?

But the quest was to run the runway, not the taxiway. After about three-quarters of a mile, we finally rounded the turn onto taxiway SG2, shuffled left up the apron’¦ and there we were: on runway 10 with 9,000 feet of wide open pavement ahead of us. You might imagine some folks spreading their arms out like wings and sprinting down the centerline. Yeah, doing that’s pretty fun. 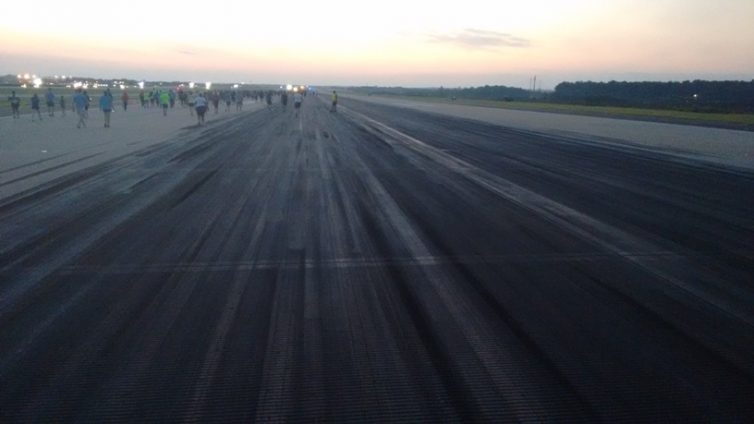 A couple hundred yards down the runway we hit the touchdown zone, skid marks matting the grooved cement. This is where the planes touch down! Right here in this exact spot. It wasn’t hard to stop and stand there for a few moments imagining heavies smoking their tires right in front of me.

But I couldn’t stop too often. If runners didn’t keep at least a 17-minute mile pace, they would run out of time and be ushered off the runway without finishing the whole course. And I had no intention of letting that happen. So I got into a steady jog and wound down the nearly mile and a half of runway still ahead of me. I did stop and take a photo of the control tower with the Atlanta skyline behind it and one of me sitting on the hold line at the end of the runway. But otherwise I got myself down to taxiway SG16 before time ran out. 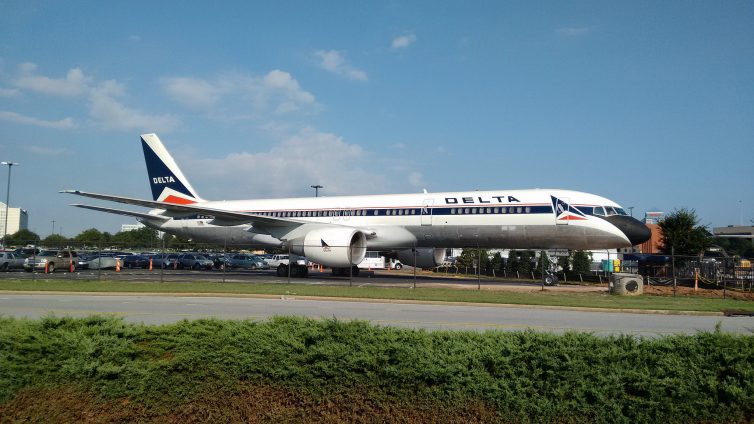 A 757 in classic livery at the Delta Museum – Photo: John Huston

On the taxiway again, I noticed people turning around and taking pictures. I looked back to see what was happening, and it was sunrise! Rays of sunlight were bursting through the humid morning air from behind a line of clouds hovering just over the horizon. Sunrise on the runway with big jets taking off and landing a short distance away. Could there be a more perfect moment for an AvGeek? If not for something that happened a short time later, this moment would have been the highlight of the entire morning. 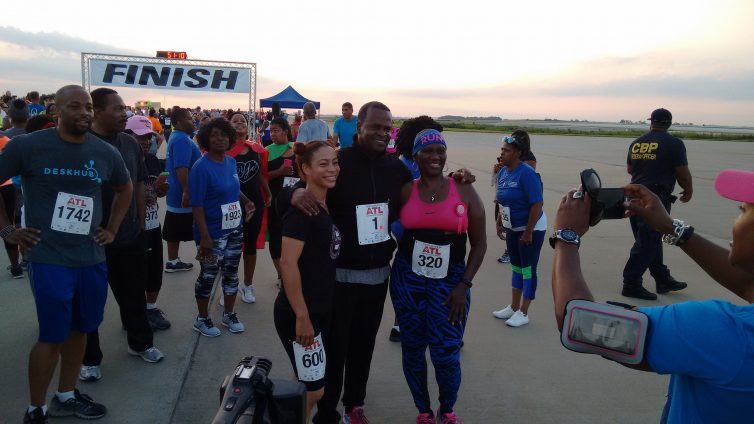 To make the experience last as long as possible, I walked the last few tenths of a mile. Then it was back to Fire Station #33 to collect my swag bag (shirt, medal, United Way cup) and await the presentation of awards to the race winners. I would not be among that group.

As the awards began, I peeked outside and saw the first flickerings of aircraft lights approaching the runway. So I did what any self-respecting AvGeek would do and blew off the awards and went outside to watch and photograph planes. After a few minutes, one of the security guys came up to me and asked if I was getting any good pictures. I told him kind of, but it would be good if I could get up closer. 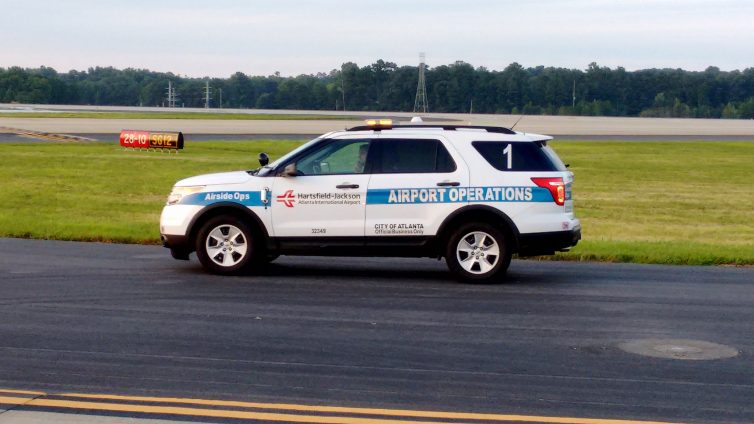 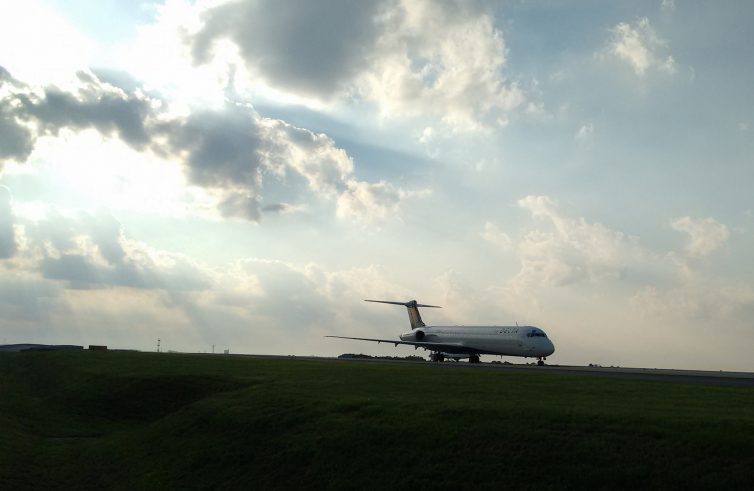 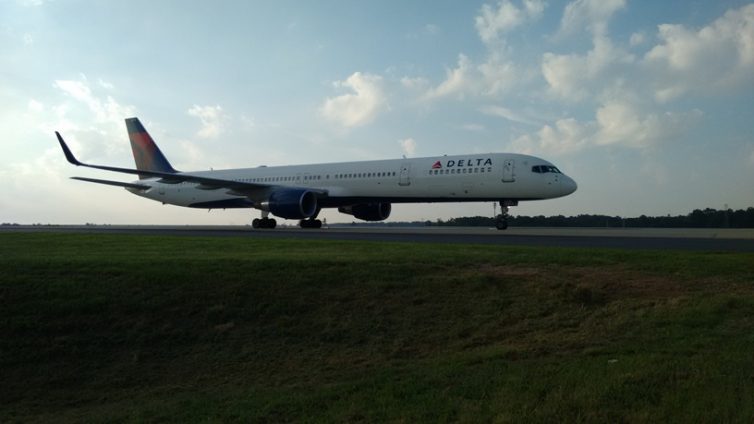 ’œYou could go up to those barriers,’ he said. Um, OK. So we walked together to the first line of barriers that had blocked the runners pre-race.
’œYou mean, here?’ I asked. ’œNo. You can go on up there,’ he said, pointing to the red and white line on the pavement that served as a stopping point for road vehicle traffic entering the taxiway. So we went up there’¦ only about 40 feet off the taxiway!

It was ridiculous to be so close. I stood there and watched three or four Delta MD80s, a Southwest 737, a Delta 757, and a couple of CRJ-900s pass by. The sights were fantastic; the noise of the landing and taxiing jets, unreal. The smell of jet fuel! I took photos and video as fast as possible because I knew I would rarely, if ever, have the chance to be this close again. I did as much as I could in the little time I had.

But in less than 10 minutes, the guard was getting antsy, and I had to get back and catch the shuttle bus. So I thanked him, made my way back through the fire station and got the ride back to the parking lot. 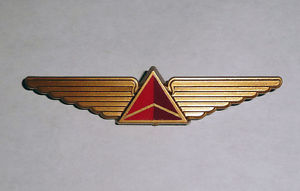 My son’s Cub Scout pack was having a picnic at the local park that afternoon and I was meeting the rest of my family there after I was done at the airport. I arrived early and went to take a nap on a bench in one of the pavilions. As I settled down, I noticed something lying on the bench. What was it? It was a set of plastic wings from Delta Air Lines. 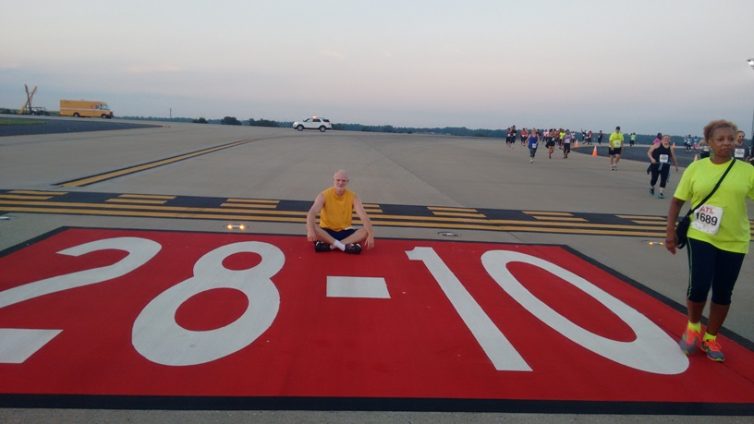 Yeah, this is me. Sitting on the hold line of runway 28-10. At ATL. The busiest airport in the world. Just sayin’ – Photo: John Huston

It had been a good morning.

The 2016 race sold out, and organizers have indicated that this event will be held again next year. Both individual and corporate team entries are accepted. Information on the 2017 race will be available on unitedwayatlanta.org in the spring/early summer. It’s a great opportunity for AvGeeks to get up close and inside the fence at ATL and also to help out a great cause.

This story was written by John Huston for AirlineReporter.

https://www.airlinereporter.com
Taking Out the Trash Pitching in on an Annual Airport FOD Walk
Savor the Layover: Three Nights at Tokyo Haneda
2 Comments

Makes good sense to hold this event very early. As I learned at Miramar Air Station years ago when we biked around the runway, it gets very hot out there very fast. I gained great empathy for ramp workers that morning.

Very cool! Last week I ran a similar 5-K at Dulles, and United had a 777 parked at the end of the runway that we ran past. The race started at the tarmac of the Air and Space Museum, and went a few thousand feet down the runway, and back up a taxiway. What’s crazy is how big and wide a runway is compared to a bike path; I’m a slow runner, but on a runway it seems even slower!