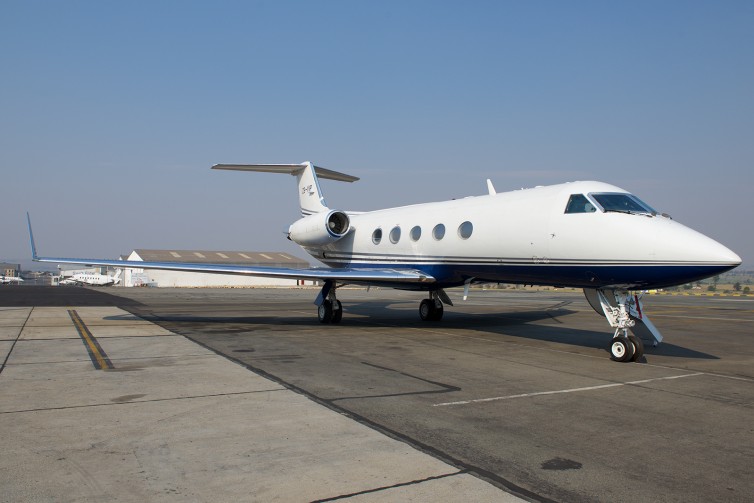 The Gulfstream III, in North America, has been ruined by noise regulations. It can still fly, but it is not loud — and I love loud. The Speys are hushed and neutered with heavy and awkward looking hushkits. So, if one wants to have the real (loud) Gulfstream III experience in 2015, you are going to have to go a long way.

To have this experience, I found myself in Lanseria, South Africa. Home of Medair, as well as being a more efficient way for citizens living in Pretoria and the Northern Suburbs of Johannesburg to depart than making the long drive to O.R. Tambo International. Lanseria is not just a domestic airport, it has a full customs and immigration set up. A good thing, as I was going to take the Gulfstream up to Maun, Botswana — the heart of the Okavango Delta. Why there? Because October is the major elephant migration and it was time for me to fly VIP, 1984-style! 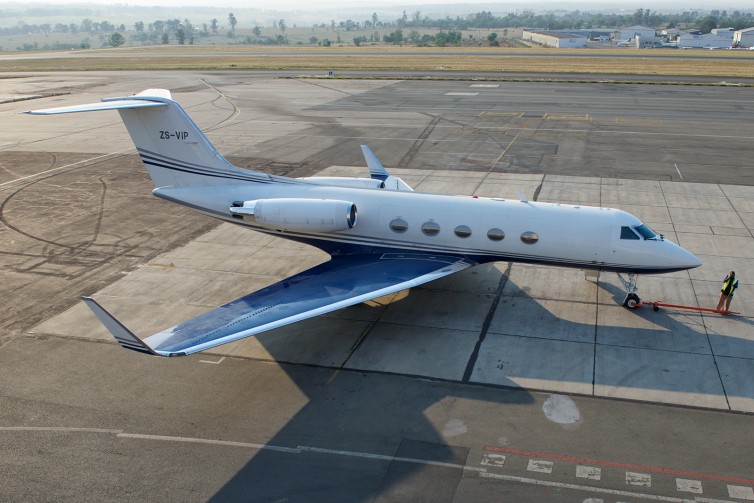 Despite the fact I was flying private, it didn’t mean that I got to eschew security, or exit customs. Thankfully, I was flying with nothing more than my camera and passport, so security was not too much indignity. This also meant that rather than being able to depart from a secluded hangar, I had to depart from the main terminal. Thankfully, the aircraft had been towed to meet me.

But first… the aircraft. The plane, reg ZS-VIP, S/N 444, was one of the last Gulfstream IIIs assembled (in 1984). You can actually see that in many ways this airframe is more Gulfstream IV on the inside — especially the avionics package. 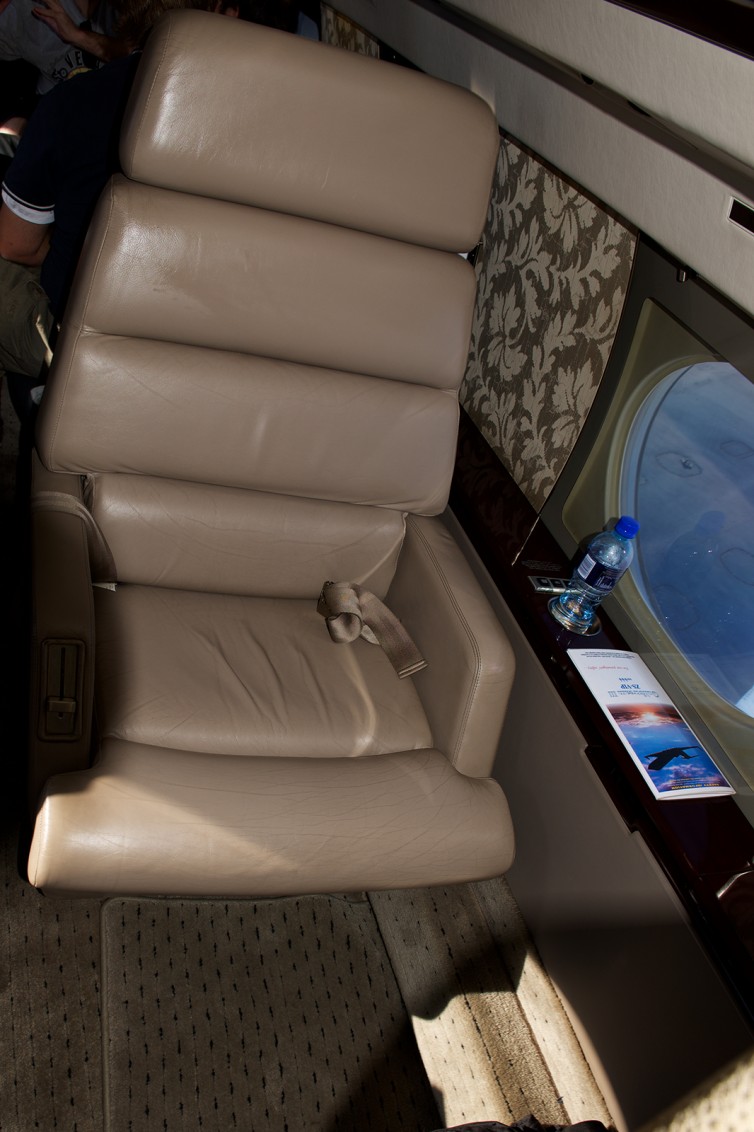 It may not be as modern as today’s first class seats, but it still very much does the job – Photo: Bernie Leighton | AirlineReporter

The interior is considerably more “Miami Vice” than the last Gulfstream I had been on. Other than that, it followed the same basic Gulfstream design. Standard recliner seats that can fold to 180-degree lie-flats, and a sofa bed toward the rear galley. Sadly, the aircraft was also missing the 42″ flat-screen television. 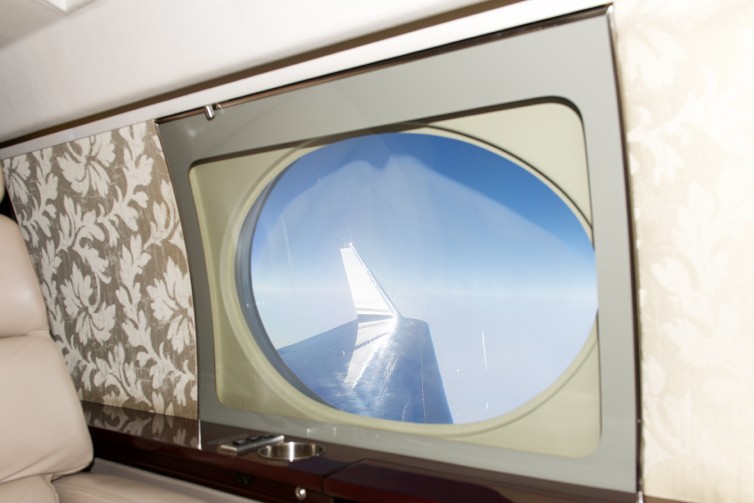 Gulfstream windows have only been getting bigger, but they’ve never lost their shape! – Photo: Bernie Leighton | AirlineReporter

While the G650 and its kin are, remarkably, controllable via smartphone app within the cabin, there is nothing much in the way of electronic passenger experience enhancements on this flight. The window shades are still very much Gulfstream, but rather than a press of an icon or button near the seat, one pulls them down, in something similar to closing a ziploc bag.

Lights are turned on by, shockingly, buttons with descriptive labels. People had it hard in the old days, didn’t they? In terms of any sort of IFE, there had been two small, Sharp screens retrofitted into the cabin walls. They even offer a very early version of the airshow map and display all the necessary flight information (or entertainment).

I certainly began to wish that this Gulfstream was equipped with Honeywell’s Planeview system. It’s an amazing plane, but it is also amazing to see how far corporate and commercial interiors have come in a little over 30 years!

Another difference between it and the later G-series aircraft is the fact that the galley is situated ahead of the lavatory. It was very well equipped, but the dark wood made me feel sorry for the cabin attendant working in there on overnight segments. 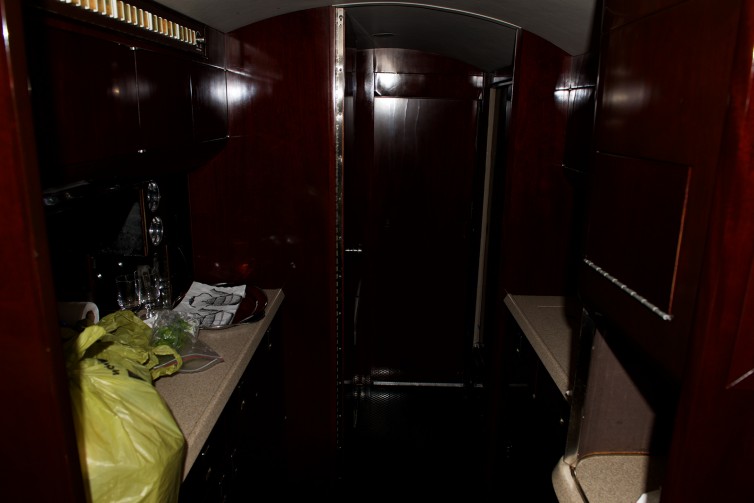 A little too dark for my tastes, but a well stocked galley none the less – Photo: Bernie Leighton | AirlineReporter

Time for the one surprise of this whole tour: start up. When you think about the Rolls Royce Spey, you expect a shrieking smokey mess. It seems that Gulfstream spared no (1980’s) expense in engineering this aircraft, as even the mighty Spey was tamed. No, it was not as silent as the G650; not even close. Having said that, it sounded more like someone was starting up a leaf blower a couple blocks away whilst I was sitting in my basement. There were many, muted, notes of greatness! It’s a testament that the frame was just that quiet. I do wonder how many layers of cabin insulation were stuffed into that era of corporate aircraft.

Just past 8:00 a.m., it was already around 28 Celsius. Now, yes, Lanseria is at 1,000 feet lower in altitude than O.R. Tambo, but that still means it’s around 4,500 feet! The density altitude, therefore, was around 6,300 feet. That’s going to make anything perform miserably, right? Wrong — Gulfstreams are not only sleek and long range, they are also rocket sleds! 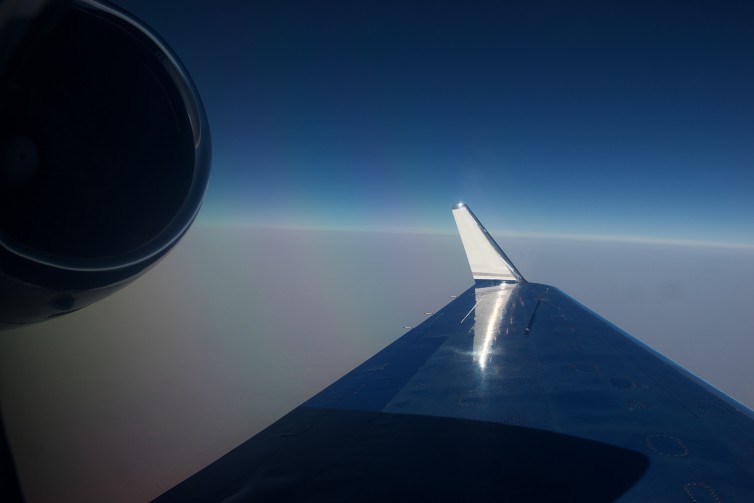 So, the takeoff roll was not that impressive. It was still around 32 seconds (for a one hour and ten minute flight). Once we rotated, however, we reached 40,000 feet in a mere 16 minutes — that’s fast!

It is a great cruising altitude, as the Southern African spring produces a lot of convection. Smaller aircraft and commercial aircraft routinely get hammered by quite impressive turbulence. There were a few bumps on the ascent, but none of them that severe. Part of me just assumes we didn’t really have time at any of the uncomfortable flight levels to really get tossed around.

As always, as both a testament to the Gulfstream’s design and the fact that the air is a lot nicer above 40,000 feet — the flight was glassine. 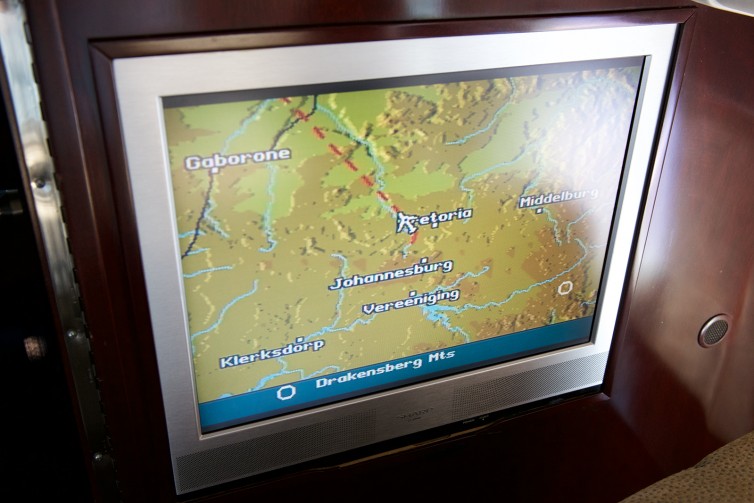 I do wonder when these screens were added? – Photo: Bernie Leighton | AirlineReporter

So what does one do on the short flight to northern Botswana with no internet and no built-in AVOD? You get trashed — that’s what. I was with a lot of English and German friends and they consider beer to be a very wholesome morning beverage. Windhoek — the best of the terrible southern African beers. 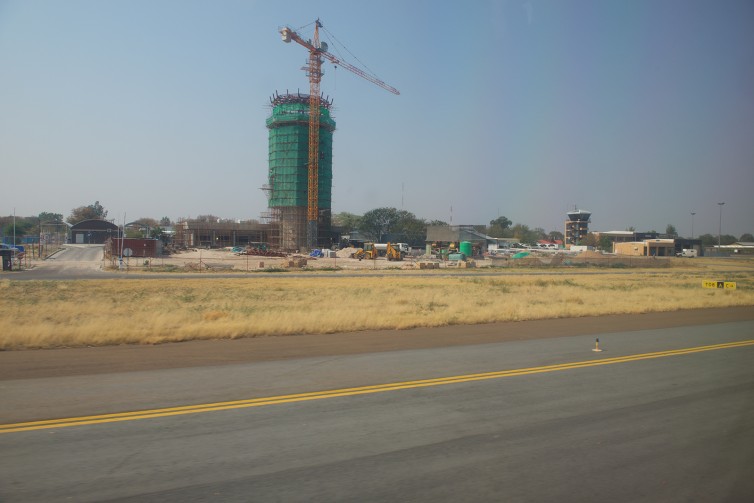 It seems as if Maun is getting a new tower? – Photo: Bernie Leighton | AirlineReporter

The Gulfstream III is an amazing plane, but boy does it float on landing when it’s 42 degrees C outside at 10:30am in Maun, Botswana! Words can barely describe how hot it was. It was worth it though. Shortly thereafter, I boarded a sightseeing flight over the Okavango Delta and I saw around 225 elephants. Unfortunately, in photographic form, they look rather like grey lumps. Either way – amazing! 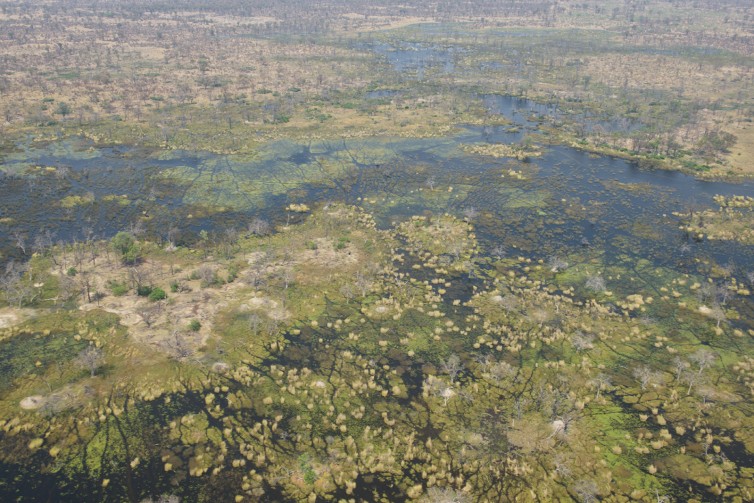 The one amazing thing about the flight home is that we reached 45,000 feet in eighteen minutes — man, these planes can climb.

Overall, I look forward to flying on even more business jets in the future, but I dare say that in terms of comfort and service; a solid first class product, like Etihad, has them all destroyed.

https://www.airlinereporter.com
An AvGeek in the Left Seat – Flying the Boeing 727
The Elusive DOT Airline Compliment – They Do Exist!
5 Comments

Cool report! Love the reg.
Great pic of the Delta

Great post B.L.
I have fond memories of a wonderful G-III that I traveled in the early 80’s. Long before a career change, my employer had one, wanted to – and did use it a lot. While the interior comforts were not quite like what we see on the newest G-models, I never heard a single complaint from anyone; it was easily the best ride available. Whatever the seats or cabin may have lacked was made up for with truly world-class catering. (Austrian, Cathy and a few other leaders would be shamed, even today.) Through countless trips, some very long and others a bit short, I lost my distaste for ‘business travel.’ I came to know the crew well, learned a lot and yes, I was offered plenty of (supervised) driving time. At some point I asked about how the dealt with essential, away-from-home repairs; the elegantly presenting cabin steward happened to let slip, “Oh, that’s me.” In addition to being a fully qualified FA, he was also the G-III’s principal ‘wrench.’ Since most loads were light, he carried most of his tools and a rather grand compliment of spare parts in the hold. The fellow may not have enjoyed quite as much Crew Rest as did the pilots, but in my experience, the airplane was never delayed for a a maintenance issue. I’ve not been on a ride like that G-III since about ’85, but trust me: they were trips that one does not tend to forget. Last I heard, the company now operates two more recent G-airplanes, both with the mechanic/FA combination and the now ‘ancient,’ G-III remains in service, somewhere. (I’d love to tell the world who employed me during those years, but doing so might embarrass more than a few Red Carpet types with whom I shared the cabin.) Trust me again: given a bit of proper instruction, most A&P’s can easily double as outstanding FA’s. Anyone whose interest is focused upon keeping the machine running properly, can certainly provide superior interior services. (Clean and clean hands? That was the early 80’s, long before most Mx began using protective gloves. Did our guys invent the idea? No, but they were early adopters of the practice.) Fun days, long gone.
That for the excellent report. -C.

Great read! I work at an FBO in Florida and we have the last Gulfstream G-II from the production line, checked via the aircraft’s serial number

I was the Chief Pilot of the company that took delivery of the G-III, S/N 444, from the Gulfstream factory in 1984. My CEO said I could have anything I wanted “up front”. A kid in a candy store; right! We had the first generation glass cockpit, but still had “steam gauges” for the engines. I flew that airplane worldwide until late 1999. Of all the civilian airplanes I flew, none had the performance of the G-III. With an unrestricted climb, we routinely reached FL 450 in 15 minutes. I only exceeded that in the Northrop T-38; 60 seconds from brake release to 30,000 ft. However; in the Fairchild Republic A-10, we used a calendar to record our “time to climb”! It was the most demanding airplane I flew, but also the most fun!

My most memorable experience of the G-II was around 1981, getting a facefull of black smoke during engine start as I was watching above from the airport’s view deck.