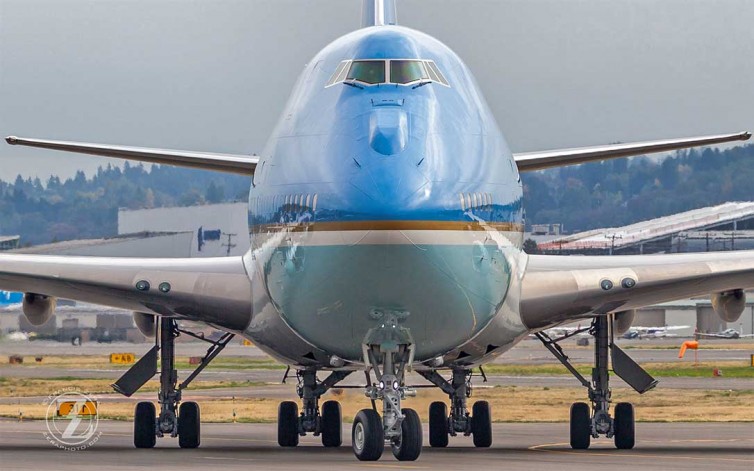 Although media wasn’t allowed to tour the aircraft, some interior appointments were tantalizingly visible from the media viewing platform. 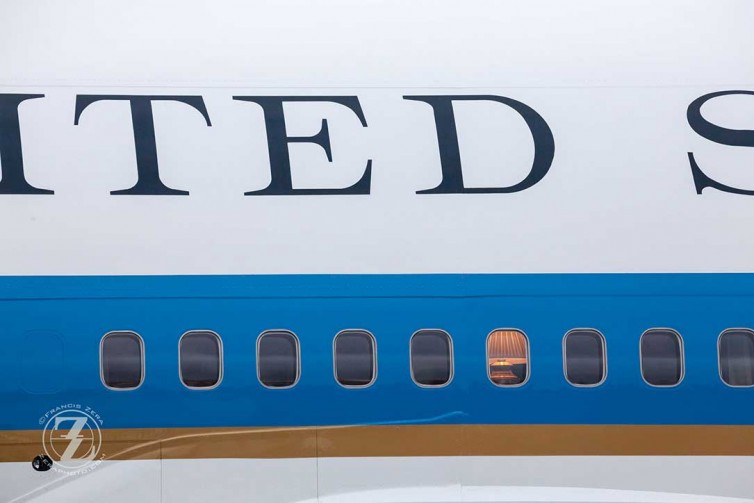 We’ll leave a light on for you. Air Force One at BFI – Photo: Francis Zera | Airline Reporter

As the president’s scheduled departure time neared, the aircraft was prepared for departure. 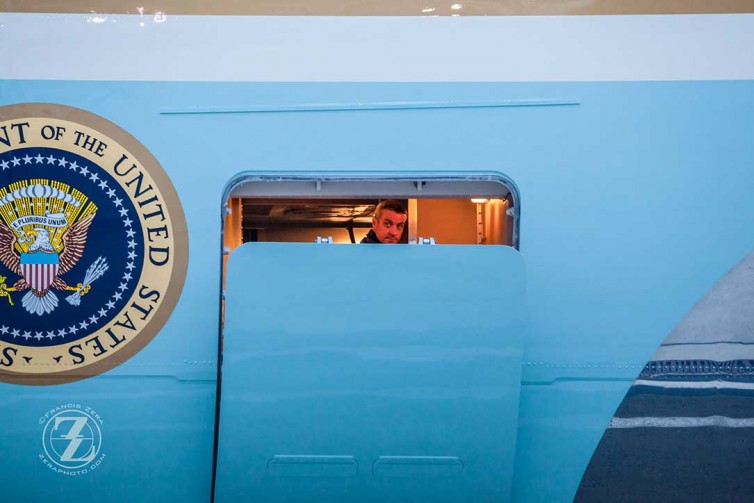 The president always boards the aircraft via the front cabin door; everyone else boards from a set of airstairs in the aft section. 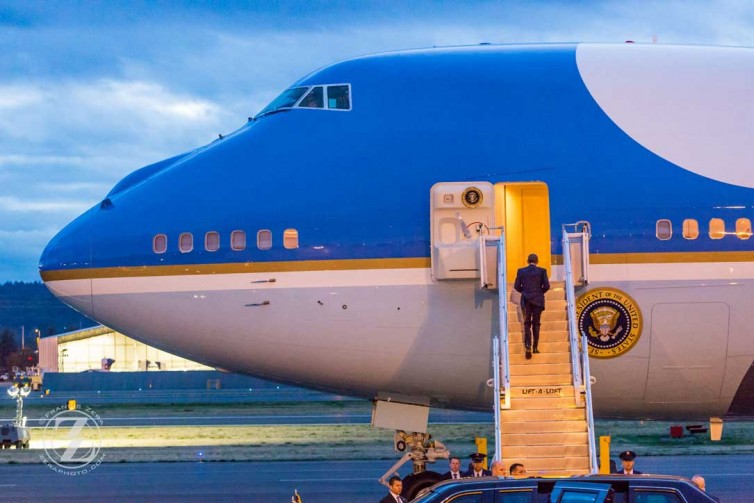 The aircraft departed Seattle for San Francisco, bound for yet more fundraising events. 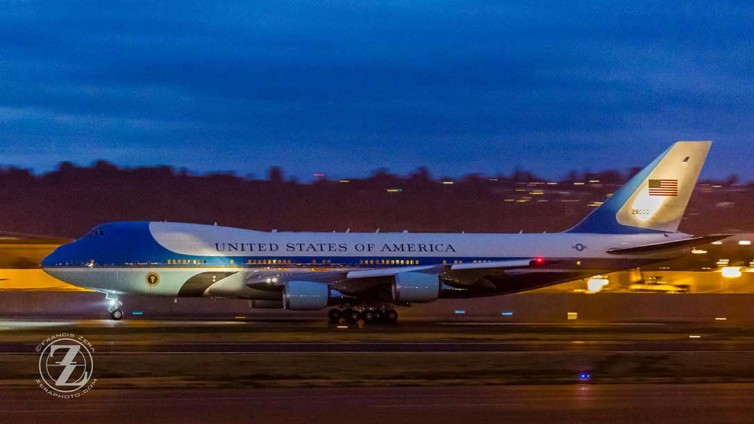 http://www.zeraphoto.com
Out of This World: The New 737 Space Bins
Handling Smoke in the Cabin on an Alaska 737
21 Comments

“Any aircraft in which the president is flying carries the call sign Air Force One” is inaccurate, as any U.S. Marine Corps aircraft carrying the President is “Marine One.”

You are correct — we have clarified the story.

When the President is in aircraft of the other services, said aircraft becomes Navy One, Marine One, Army One and Coast Guard One.

You are correct Glenn, since we were just talking about the VC-25, we should have clarified that and have updated the story.

You had me…until you used the word ‘tarmac’ to incorrectly describe the ramp (or ‘apron’ if you must) as the airport. Please stop using a word that the media has been incorrectly using for many, many years. We’re actually in the aviation community and should all know better.

This has actually turned into something a bit bigger…

Although by true book definition, tarmacs really don’t really exist in the US, it has become pretty standard terminology. Look at the DOT and how much they use “tarmac,” especially with the Tarmac Delay Rules. I almost wonder if it has become more like “Qtip” or “Kleenex” today than actual definition. I am going to be reaching out to quite a few different people at different levels at airports in the US and also the DOT to try to figure it out. If it turns out that everyone is just using it wrong, including the DOT, we don’t want to be a part of that. Love to hear your thoughts.

At least for now, I have removed it, but stay tuned!

I agree. Tarmac should never be used to describe any airport surface. Airports have runways, taxiways, ramps, aprons and hardstands. Pilots will never see a ground location/direction sign that indicates “TARMAC”; nor will an airport chart note “TARMAC”. In fact, directions to the “RAMP” are being replaced by “APRON” was well as remarks on Notices to Airmen (NOTAMS) now include the latter. Additionally, “3 Hour Tarmac Rule” was coined by the U.S. Senate after Kate Hanni was stuck on the ramp for hours and repeatedly misused the word as she presented her case on Capitol Hill. (You may remember previously the term was usually, “we were stuck on the runway for 3 hours.” Of course, that would not be correct either). Futhermore, the job title of a baggage handler is most commonly referred to as “ramp agent” and not “tarmac agent”.

The way the current administration gets around these issues is to schedule some minor event in the same city as the fund raiser – i.e., Seattle dedication of a federal building or other cover. The Air Force, Secret Service and other agency employees are then paid by the government and no reimbursement is sought from the DNC or other political entities

When a president, or any other political figure, uses a government airplane on fund raising trip his or hers political party should pay for the usage of the vehicle.

@Don maybe before you open your mouth about them paying for the plane you should do some research. Their affiliated political parties do reimburse for purely political trips.

Gee Scott, I must have hit a nerve! Maybe you are the one who “should look it up”. The cost of flying Air Force One is $179,750 per hour. On political trips the president pays the equivalent what he would pay for a commercial flight. So flying across the U S about 5 1/2 hours AF1 cost is about $1,000,000. A first class ticket is not more than $1,000. Also, they fly the second B747 as a backup for another $1,000,000. These costs are also doubled since he has to fly back to Andrews. So for a mere couple first class tickets across country at somewhere around $2,000 you and are are stuck for the 4 million dollar bill. Look it up Scott

@Scott it happens that I do know what it cost the taxpayer. Air Force One figures out (according to the government) at $179,750 per hour of flight. This calculates out as about $1,000,000 to cross the U.S. and the also send a second B747 as backup for another $1,000,000. Also they do have to return to so you double the numbers and get $4,000,000 just for the cost of the airplanes. NOW, if you look it up Scott you will find that on political trips the president pays the equivalent of a first class commercial ticket or about $3,000 and you and I pay $3,997,000. There are many other expenses but I will leave that out for another time.

According to this NYT article (I am not well versed in this area), it looks like as of 2010, the president has to pay the equivalent of chartering a 737. http://www.nytimes.com/2012/04/22/us/politics/presidential-vs-political-trips-a-blurry-line-for-obama.html?_r=0

And also, have to remember, that you not only have the two 747-200s going, but also a C-17 with everything else (ie limos) needed.

absolutely correct. But, they always find some non-political event with which they can camouflage the trip and make us pay for it. It’s really a shame

Among other sources, the word “tarmac” (derived from “tarmacadam”) is defined in the Houghton Mifflin Harcourt, Cambridge, Merriam-Webster, and Cambridge dictionaries; it even appears in the Online Etymology Dictionary. I submit that the use of the word “tarmac,” while that usage may upset some people, is a legitimate and well-recognized word in the English language.

While I did not get out my reference books, I doubt that the word “tarmac” exists in Anglo-Norman, the language of William the Conqueror, who was victorious on 14 October, 1066, in the Battle of Hastings, a battle that did not take place in Hastings; rather, it was fought some eleven kilometers northwest of Hastings, near the present-day town of Battle. (As a medieval historian, I thought I would add that truly useful piece of information.)

However, you will notice in professional aviation publications, the word “tarmac” is rarely used unless it is associated directly with the 3-Hour Rule. The term not re-entering the current lexicon of so-called aviation terms until Kate Hanni experienced her ordeal in 2006. It had been decades since it was commonly used especially during 1976 when it was repeated constantly by a BBC reporter during the hijacking at Entebbe. It quickly disappeard afterwards when any hard surface on an airport was now a runway. On a similar note, I had a Washington Post reporter agree with me several years ago when I notified him of the improper use of “tarmac” he wrote constantly in an article. He quickly responded that I was the third person to email him that morning and would never use that word again.

Walter, if you will allow me one final submission on this subject, please note that I did not refer to the use of tarmac in aviation, but, rather, in the English language. The average person, non-aviation-connected, is likely to have seen, even to have used the word, and will continue to do so; again, that is because in non-professional usage, tarmac is acceptable.

In another of my personas, I was also a fire chief, both volunteer and career. Starting in the mid-1970s, I was quite active in an effort to stop the use of “fireman” when referring to members of the fire service. For one thing–and I am proud of my pioneering step–I appointed my first female assistant fire chief in 1975; the term now used to replace “fireman” is, to a certain extent, is “firefighter,” a more descriptive and gender-neutral word. Will “fireman” ever stop being used? Not likely, not even by the fire service itself.

(Personally, I like “Emergency Responders Who Do Not Rescue Cats From Trees.” Yes, I have received requests to do that, and have told the callers to let me know if the cats are still up the trees in a day or two. No such caller ever called again…).

Even in my chosen academic field, the use of the term “Dark Ages” is, similar to your argument about professional use of tarmac,” regarded today as quite improper. There are many reasons for that; suffice it to say that the era considered by non-professionals (and, yes, for a long time by professionals) was anything but `dark.’ Will the term ever stop being used? Perhaps, but not overly likely.

With that, I shall end my disquisition.

Love the plane, not fond of the dingle berry that rides in it.

@David Parker Brown – When writing future stories the reference the trademarked product “tarmac” please utilize the â„¢ when referring to the product patented by Edgar Purnell Hooley in 1901 and later trademarked Tarmac Holdings Limited in the UK. Tarmac is “Hooley’s 1901 patent for Tarmac involved mechanically mixing tar and aggregate prior to lay-down, and then compacting the mixture with a steamroller. The tar was modified by adding small amounts of Portland cement, resin, and pitch.” At no time should it be referred as a location on a airfield.

Having been in the Airline Industry as an employee on the Ramp (not Tarmac), Customer Service (Gate Agent, Ticket Agent), and Airline Material entrepreneur myself, I am always appalled at the use of the word ‘Tarmac’. This is totally not correct as the above posts mention. This simply shows how stupid the media is in referring to something that is totally bogus. Francis, you call your self an ‘AvGeek’, if so, please use do NOT use the word ‘Tarmac’ in any future postings. You and so many other “Airline Journalists” just show their lack of knowledge using the “T” word.

That”s why we partner with your team to create solutions that work for your building”s needs.