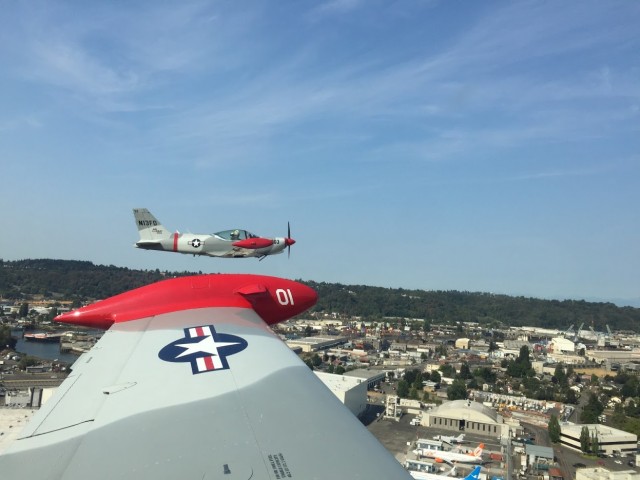 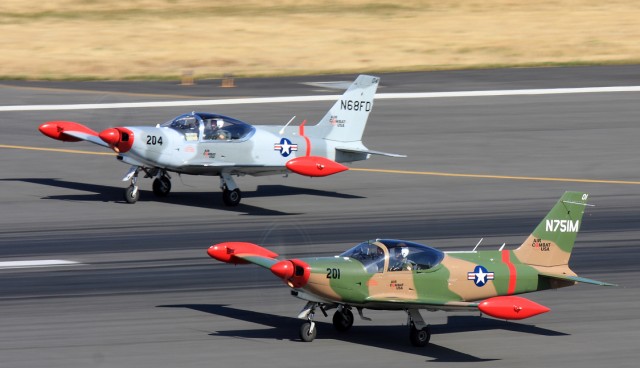 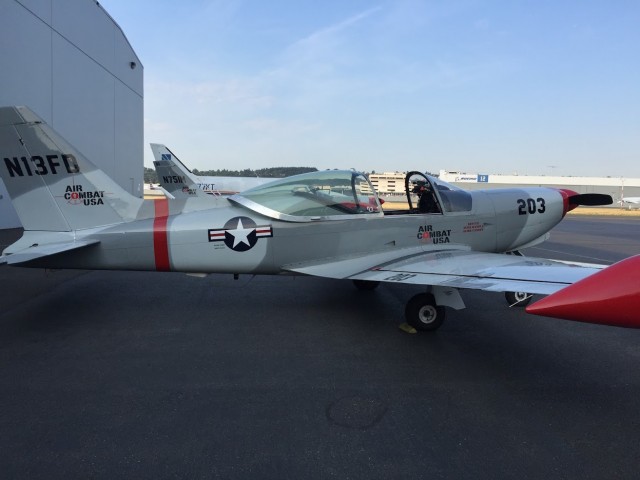 The big day of training had finally arrived! I felt very prepared, as I had read all about aerobatic flight and different types of maneuvers. I arrived to the hangar and found the pilots: Findog and Bluto. Both of them went by their call signs from their Navy days. It’s always an honor to talk with and learn from such experienced pilots.

Findog has over 11,000 flight hours in aircraft such as F-4 Phantoms, A-4 Skyhawks, F-14s, Learjets, the Dc-9, B-737, B-777, and B-787. Bluto has also flown various aircraft, totaling up to 17,000 hours. Flying with the Navy for 20 years, much of his time was in the F-8 and F-4. He also flew the F-5 and A-4, ultimately culminating his Navy career as the Air Boss on the USS Ranger. I tried to concentrate on the briefing as it was sinking in that I was actually going to be behind to controls with one of these pilots!

During the briefing, we discussed safety, the importance of having fun, and the types of maneuvers we would perform. I’m usually a quick learner, especially when instruction is such high quality with models and interactivity as was our briefing. However, there is only so much that you can soak in within 30 minutes. Within this time, we went over the basics of formation flying, gunsight tracking, yo-yo drills, and more. Some main points that I took with me from the briefing to the flight were:

There were “rules to live by as well”, which stuck out as they were practiced during the flight. 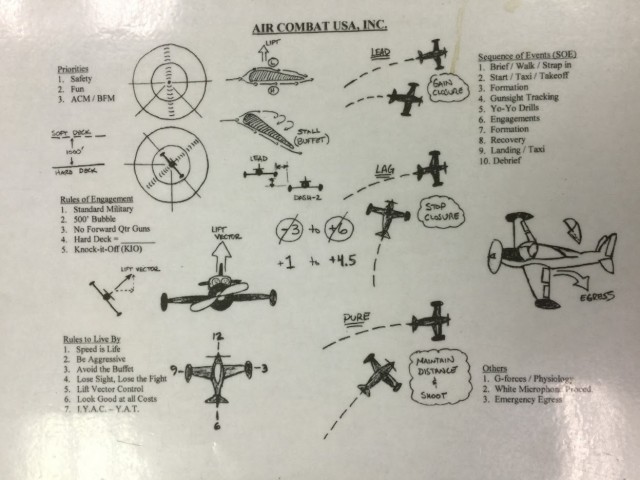 We proceeded to suit up and head to the non-movement area. Every participant was given a nomex flight suit decked out with badges, a helmet with built in headset and shades, a parachute for in case of emergencies, and plenty of time to take selfies. This brings us to the first of the rules we were given to live by:

“Look good at all costs.” 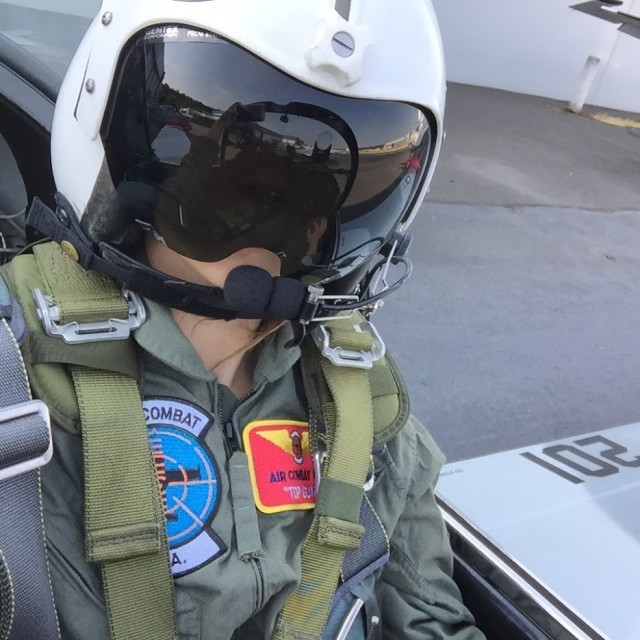 The gear we were given for flight ’“ Photo: Kassy Coan | AirlineReporter

We boarded onto the Siai Marchetti SF-260’s. After taxiing out towards the run way, we received clearance for a formation flight take off. The skill of the pilots we were flying with was evident from the very beginning.

My flying experience is in rotor craft – not fixed wing. So, it was a very challenging experience to figure out the controls, while so close to another aircraft! I never felt in danger, though, as Bluto was right there beside me. The pilots found an excellent balance between taking over for safety, and handing over the controls so the participant could learn and fly themselves. It was similar to the flying I was used to, as all inputs needed to be small and controlled. I really started to get the feel for it, once I fully processed the delay between cyclic over and seeing the aircraft move. It was more crucial than ever to not look forward, but to keep sight on the other aircraft, constantly calculating any difference in distance between them and myself. 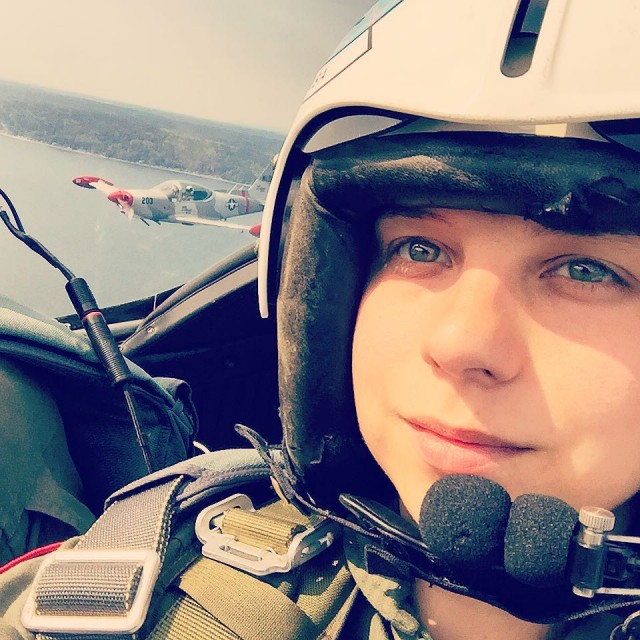 During maneuvers themselves, flight strategy became an entirely new world. When the FAA (FAR §91.303) defines aerobatic flight as “intentional maneuver involving an abrupt change in an aircraft’s attitude, an abnormal attitude, or abnormal acceleration, not necessary for normal flight,” they aren’t kidding about the abrupt part. There was one thing that Bluto told me, which will likely stay with me for the rest of my life: “Stop flying like a helicopter pilot and start flying like a fighter pilot” (I took this as a compliment). This is when he without warning, pushed my cyclic dramatically left, teaching me how to roll. Something clicked. I now had a feel for what the SF-260 really wanted to do.

Now, we were ready to try the back flip! During this basic fighting maneuver, the Yo-Yo, it was very important to not lose sight of the other aircraft. All the while, we experienced up to 4.5 Gs. 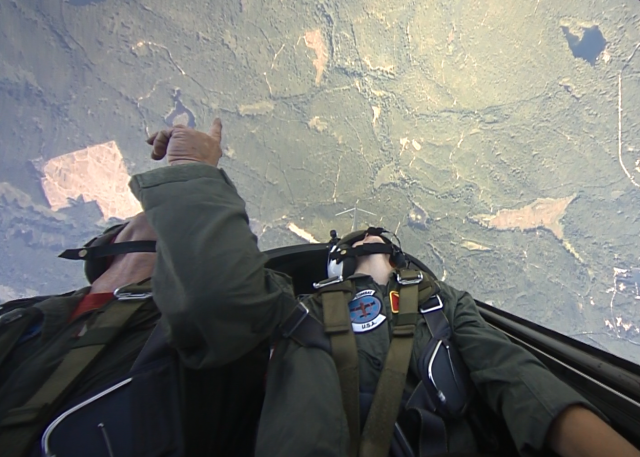 Back flip in an SF-260 ’“ Photo: Kassy Coan | AirlineReporter

After the flip, we had gained a lot of altitude, which is our potential energy. It was very necessary to nose down, and turn that altitude into kinetic energy, or speed. Upon this, we brought the other aircraft into the gunsight, aim, fire! “Good smoke!” stated Bluto, as I finally comprehended all that had just happened and saw the smoke trail out the path of the other aircraft.

While I learned so much during this first training session, the experience, much like the movie I saw, left me yearning for more. It was fun, yet quite challenging, requiring precision and skill. While I personally hope to find an opportunity to fly aerobatic aircraft more often, I encourage everyone interested in aviation, or just with a competitive streak inside of them, to check out Air Combat USA’s flight schedule, and try the immersive experience for yourself.

An excellent article that provides an opportunity for us “ground based” Av-Geeks to experience such an exciting event! Thanks for sharing…

p.s. Sexist or not, I’m gonna’ say it – You have the most gorgeous blue eyes I have ever seen! Will you marry me?