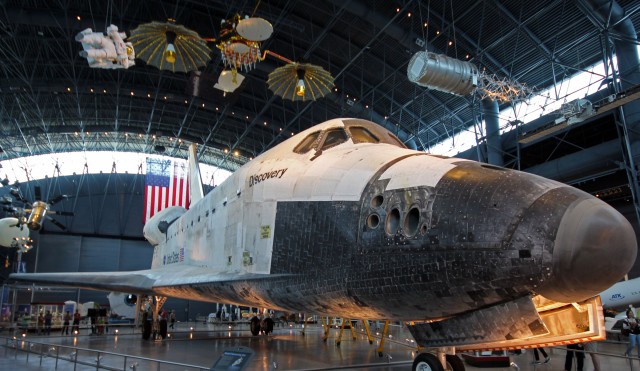 Maybe I got a bit spoiled getting around Washington DC all weekend with its amazing Metro transit system, but getting to the facility on public transit wasÂ a bit of a challenge -Â evenÂ more so with a 22-month-old toddler in tow. Â Our plan to get out to the museum from downtown D.C. had been to take advantage of Uber’s family service, which features vehiclesÂ with car seats installed. However, lo and behold, on the morning of our flight I logged onto Uber to see, “No Uber + Car Seat Available.” Â So public transit it was with all our baggage and toddler. Â At least our kid loves riding trains and buses.

We were fortunate to catch a silver line train (which goes in the direction of Dulles) within a few minutes of getting to the metro stop. Â  We reached the end of the line, still eight miles short of the museum, nearly an hour later. Â There is a bus which connects this station and the museum, however it operates on a 20-minute schedule and we had just missed it. Â After checking Uber again (still no family service available), we resigned ourselves to wait for the bus, which took 40 minutes to get to the museum, via the airport. Â This process will get a bit easier in the future when the silver line is extended to Dulles, however that won’t happen until 2019Â at the earliest. 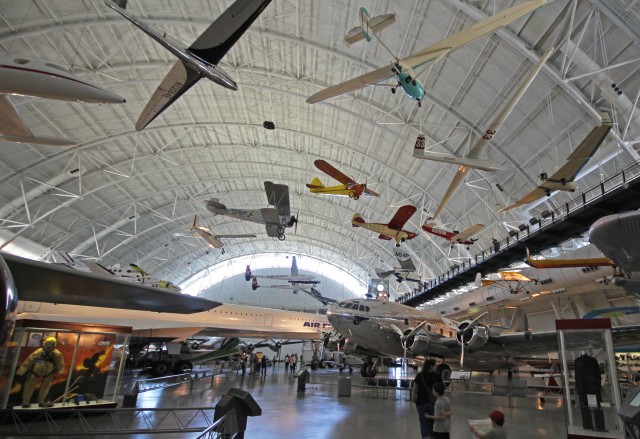 Finally atÂ the museum, we went through bag check before being allowed to enter. Â As our next stop was the airport, we had all our bags with us. Â The bag check took some time as the security guard poked and prodded through an entire weekend’s worth of luggage. Fortunately, we did not have to tote our bags all over the museum, as lockers are provided by the museum free of charge. Â It seems like it would be more efficient to put the bag check after the locker room, but I’m sure there is an operational or security reason for the way it is currently configured.

The view upon first entering the main hanger is incredible – an SR-71 dominates the scene, with the space shuttle in the background. Â The open expanse of the massive main hanger, with hundreds of aircraft, stretches in both directions to the left and right. 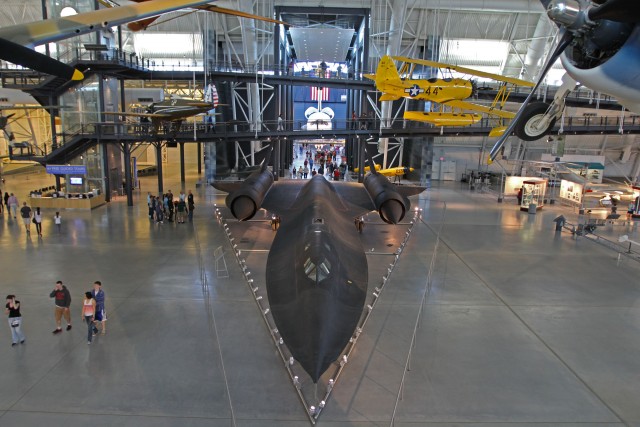 Getting down to the hanger floor, ourÂ first stop wasÂ the SR-71. It’s pretty incredible to see this aircraftÂ up close and think that itÂ can cruise at over 2,000 MPH. Â The final flight for this particular bird was onÂ March 6, 1990, from Los Angeles to Washington D.C. in 1 hour, 4 minutes, and 20 seconds, averaging a speed of 2,124 mph. Compare that to your typical four-and-a-half-hour commercial flight! 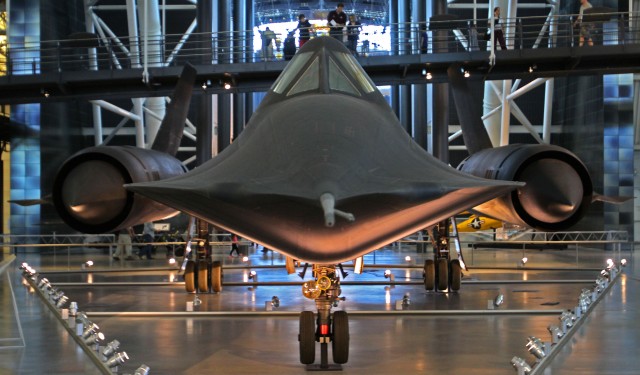 Up close and personal with an SR-71 Blackbird – Photo: David Delagarza | AirlineReporter

Our next stop was the space shuttle Discovery. Â It is hard to describe how I felt walking up to the space shuttle. I grew up closely following the space program. As a child, I lived in Florida and watched manyÂ of theÂ launches, both up-close and at a distance. Â I cried at the Challenger and Colombia disasters. Â I watched, with great interest, the landmark missions such as the Hubble space telescope repairs and construction of the International Space Station. And I felt profoundly discouraged when the shuttle program ended in 2011 with no replacement. Â To me, the space shuttle represents the pinnacle of our civilization’s advancement. Walking up to it felt very much like standing on the Great Wall of China – I felt completely in awe of what mankind can achieve. 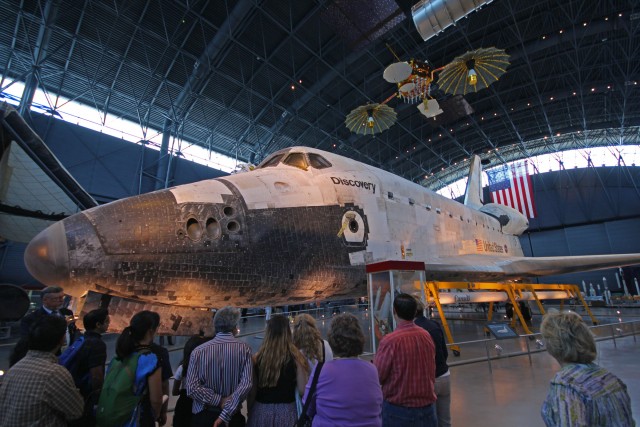 I appears the feelings are also felt in the next generation. As we approached the shuttle, my son pointed at it and proclaimed, “Airplane!” Â Airplane, indeed. 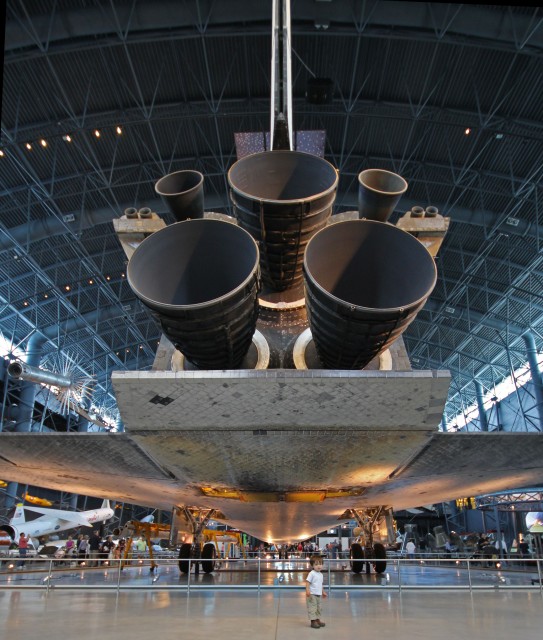 After at least half-an-hour (to the protest of both my wife and son) of geeking out over the shuttle, we moved onto the rest of the museum.

Walking around on the floor of the main hanger is a bit overwhelming. Â Every direction you look has a different plane, each with an interesting and unique history. Â It is easy to get hung up on the major showpieces, but I really enjoyed looking at and reading about some of the lesser-known (or forgotten) stories in aerospace history.

One piece that I found particularly interesting was the Boeing 367-80.Â As the prototype for the Boeing 707, this is the plane that kicked off the jet age of travel.

In 1952, Boeing rolled the dice in a big way byÂ green-lighting the 367-80 project, despiteÂ a lack of interest from the military andÂ airlines. Â Based partially on the designs of theÂ C-97, B-47, and B-52, and powered by fourÂ Pratt & Whitney JT3 turbojet engines, this aircraft first took flight onÂ July 15, 1954. Â With a faster speed, higher capacity, and longer range than theÂ de Havilland Comet – the only other commercial jet at the time – the airlines quickly realized the potential and the Boeing 707 was born. Â 1,010 Boeing 707s were ultimately produced, and this plane’s legacy continues to this day. 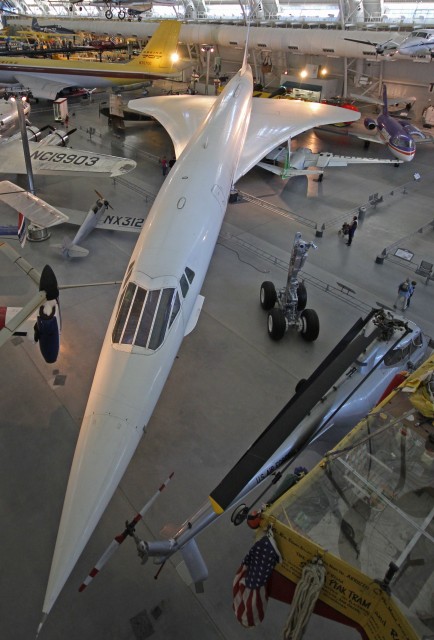 After a few hours of walking around, both wife and toddler made it clear that they were done and ready to leave. As for me, I could have probably spent a few more hours wandering. 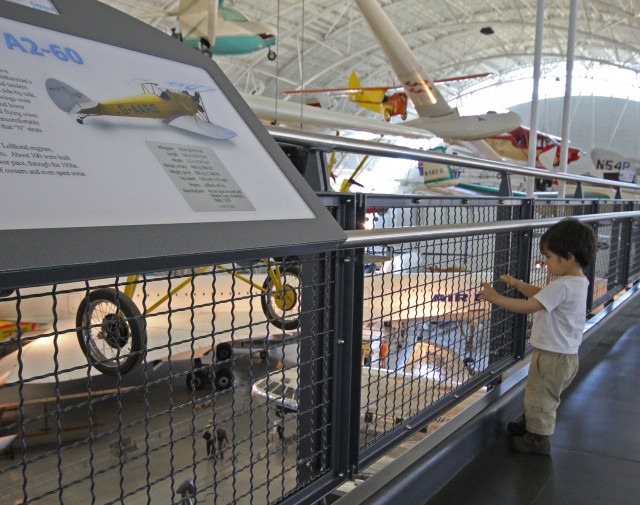 Even my plane-crazy kid got bored after a few hours – Photo: David Delagarza | AirlineReporter

I did have one last stop I wanted to get to before we left: the observation deck. Â The museum includes a tower that overlooks Dulles Airport, with a great view of the approach end of runways 1L\1R. Â While waiting for the elevator up to the observation deck, the attendant told me that the most exciting time of the day is about 3:15 pm, when A380s from both Air France and British Airways arrive within a few minutes of each other from Paris and London. Unfortunately, the timing of my flight was such that I would not get to see those heaviesÂ arrive. 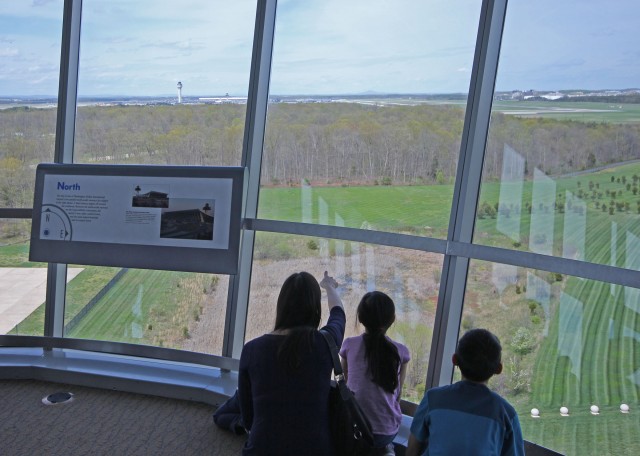 Planespotting for everyone – the Observation Deck at the Udvar-Hazy Center – Photo: David Delagarza | AirlineReporter

The observation deck streamsÂ live audio from the Dulles tower, and everyone seemed to enjoy listening to the various planes receiving theirÂ landing instructions. Â I opened up my flight trackingÂ app on my phone, which added another layer of interest by being able to identify where the various planes were coming from. Â In the time that I was there, IÂ got to see several international arrivals, including a United 757-200 from London and an ANA 777-300ER inbound from Tokyo, as well as a number ofÂ domestic arrivals. Â Unfortunately the landing pattern, when I visited, was in theÂ 19L/R direction, so the arrivals were coming inÂ on the opposite end of the field and I could not get great photos.

Eventually, much to my wife and son’s relief, I had to admit that it was time to head to the airport to catch our flight. Â The #983 bus was waiting outside as we left the museum, and it was a very short trip to the terminal. 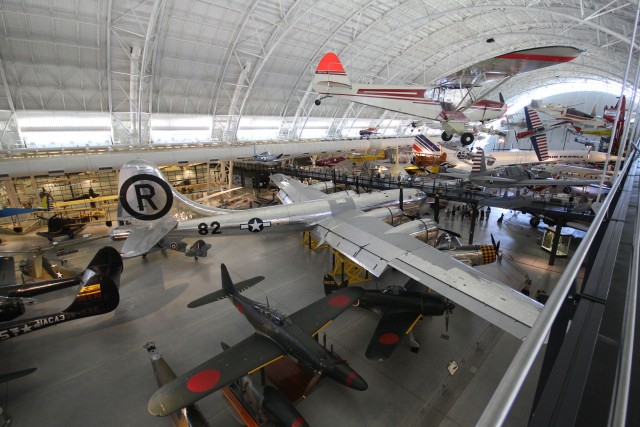 I have to admit that visiting this museum, like many aerospace museums, was a little bittersweet. It was not that long ago thatÂ the SR-71 was screaming around the world at Mach 3.5, the space shuttle was routinely soaring into orbit, and one could book a ticket on the Concorde for a three-and-a-half-hour New York-to-Paris flight. Now all these aircraft are museum pieces, symbols of a promised future that never arrived. While it’s true that the end of the cold war and dawn ofÂ space age rendered these craft obsolete and economically unjustifiable, as one friend put it – “It seems like we have stopped trying.”

Conflicted feelings notwithstanding, I thoroughly enjoyed my visit to the museum. Â In fact, I would even intentionally schedule a longer layover at Dulles to make another visit – there is plenty I did not get so see there. Â With the short bus ride, any layover more than three hours would probably be sufficient for a quick trip, although realistically you’ll want to spend hours looking around the museum.

ASSOCIATE EDITOR - DENVER, CO. David is a civil engineer by training and trade, but his head is in the clouds. A licensed private pilot and skydiver, he grew up around airplanes and airports. He calls Colorado home, but travel is in his blood. You can find him sitting in coach with his wife and toddler on the way to their next great adventure. Email me at [email protected]

https://www.airlinereporter.com/author/davedlg/
Malaysia Airlines Might Be Downsizing. Big Time. Where Will Their Planes Go?
Inside LATAM’s New Santiago VIP Lounge
6 Comments

I don’t think we have stopped trying. We are just being rational about making planes that use resources more efficiently. The whole point of the 707, after all, was to expand air travel and make it more productive at the same time. The A380 does that. So does the 787.

I have visited the museum but not yet the Dulles facility. I look forward to it.

Absolutely, we are in a different age. The age of raw power and speed has been replaced by the age of efficiency and sustainability. We owe the existence of the SR-71, Space Shuttle and even Concorde to the intense competition of the cold war, a time which has long since passed.

They must do a lot of hanging in the hanger.

Indeed, “Hanger” â‰  “Hangar”. Can I blame my spell check software that flags every instance of, “Hangar”?

The Concorde is a thing of beauty.
Are you allowed on board any of the aircraft at the Udvar-Hazy?

Unfortunately, none of the aircraft are open to the public. The Space Shuttle in particular would be amazing to look around.