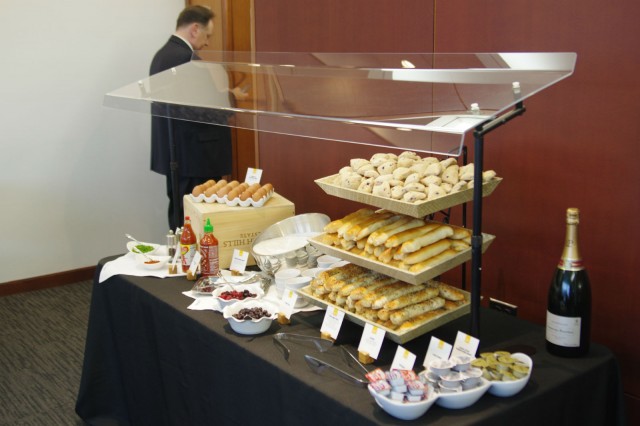 United Clubs will nowÂ have an extensive offering throughout the day,Â with time-appropriate menu itemsÂ available. Traveling in the morning, and want to grab a quick breakfast before your flight? No problem!

If you want something on the lighter side, you will get the option of a Greek yogurt bar, or perhaps some hard-boiled eggs and bagel sticks (think bagel texture, but in a breadstick format). Need something a little more filling, you can grab a bowl of oatmeal, with a range of toppings. 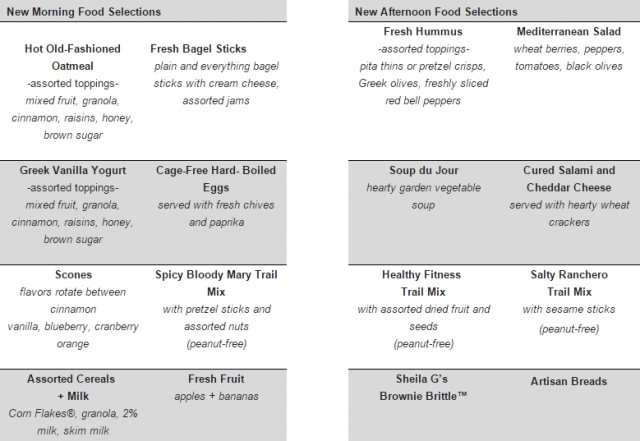 The food menu, provided by United, about some of the new options

For the â€œafternoonâ€ (think lunchtime, onward) there will be a soup withÂ bread, along with a salad (the first offering will be a wheat-berry salad) along with hummus and other items to snack on, like pretzel thins.

There will be some items that, of course, will be staying. Fresh fruit (in this case, apples and bananas) will still be available, along with also some trail/snack mix. Â But gone are the cookies & yogurt pretzels, replaced with Sheila Gâ€™s Brownie Brittle (a brownie in cookie format). Â Drink offerings are not changing as well, with Coca-Cola products staying, along with coffee and a range of complimentary alcoholic beverages. 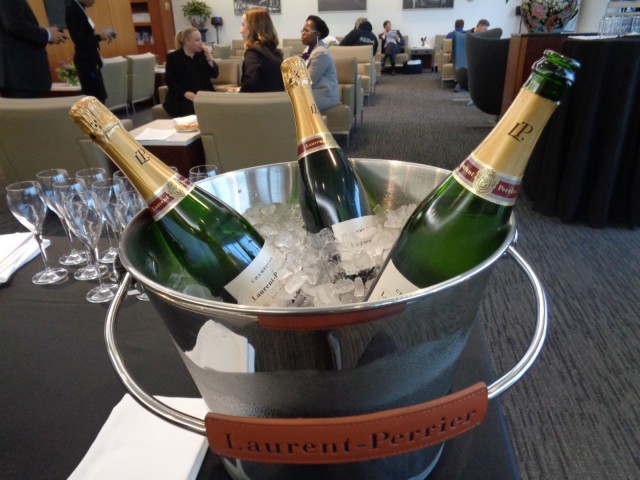 Coming soon to a lounge near you, real Champagne! United is teaming up with Laurent Perrier to bring champagne to all the United Clubs (for a small charge) – Photo: Mal Muir | AirlineReporter

The new menu will be rotational (similar to onboard menus), and thus will vary. Â The items will cycleÂ as the seasons change and will allow United to try new things at appropriate times. Â The first club to get the new menu, starting today, will be the C16 club at Unitedâ€™s Chicago hub. Â From there it will roll out to the other clubs at Oâ€™Hare, and head on to the major hubs (SFO, IAD, IAH, etc) by the end of summer. By the end of the year, expect it across the entire United Club network.

â€œWeâ€™re making major changes in our United Clubs to give our customers the elevated, hospitality-centric service and experience they deserve and expect. This year will be transformational,â€ said Jimmy Samartzis, vice president of customer experience. Â â€œOur new fresh, tasty and healthy food offerings, overhauled service approach, and systematic investment in renovating the rest of our 49 clubs worldwide will give our customers an airport getaway for relaxing or being productive during the hustle and bustle of their travel day.” 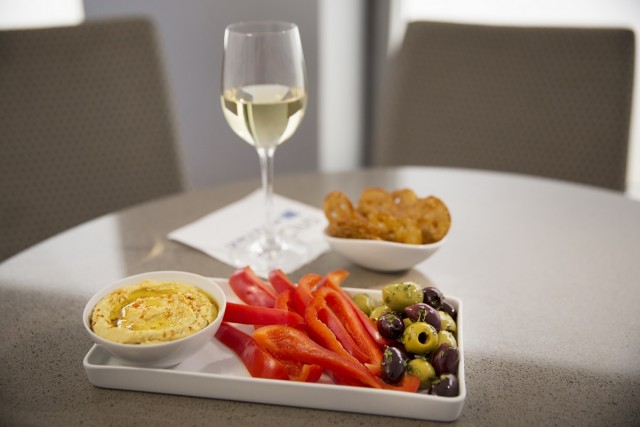 That is all well and good, but how does it taste? Well, United invited a number of their frequent fliers and select media to give the menu a try. Â We could sample offerings from both the morning and afternoon service. In the perspective of lounge food, I found it fresh, varied, and (most of all) tasty. The Greek yogurt (which is vanilla flavor) was creamy and delicious, without too much of an overt tanginess. The bagel sticks had the texture and taste of a traditional bagel, yet were in an easier-to-eat format vs being round.

ForÂ the afternoon, the soup tasted great and although I am not able to eat hummus (due to allergies), others seemed to be pleased. Â As someone who has an extreme sweet tooth and who has consumed enough cookies to rival the Cookie Monster, I was impressed by the brownie brittle.

The new trail mix was good as well, being raw (as opposed to a more traditional toasted variety), it had a fresh taste, though it could do with less seeds in my opinion. 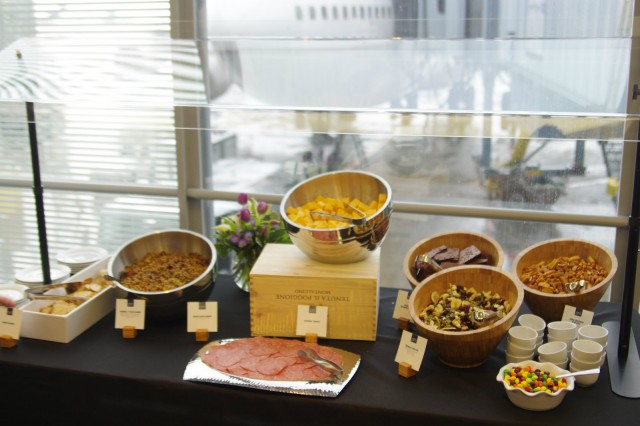 Need a snack before your flight? Why not grab some cheese, crackers, or salami and relax – Photo: Mal Muir | AirlineReporter

The menu changes are not the only thing to be changing in United Clubs; expect changes to the way the club looks too. With new food comes new approaches from the hospitality and service standpoint. Gone are the tacky cereal dispensers – expect more modern, appealingÂ service items to get your snacks from. Â The new, renovated club design will bring a more modern look to the lounge, with plenty of different seating options to work, rest, or enjoy a drink.

The biggest change will be the addition of outlets — power galore! The club is bright, fresh, and modern, and feels like a lounge should. Â United has already started to deploy their new renovated look with one (of four lounges) already completed at Chicago (Terminal 2), plus clubs in Boston, San Diego, and Seattle. The new Star Alliance Lounge, operated by United, at London Heathrowâ€™s new Terminal 2 is one of these new lounges and has won industry acclaim for its design. 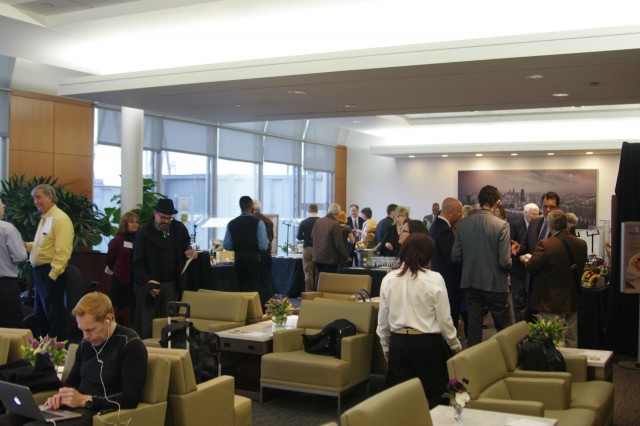 As United begins updating all 49 of their clubs, incorporating these changes, they start a process of becoming consistent. They will be working toÂ implementÂ major brand changes, so expect to see more improvements in the future. Â Not just to the clubs and onboard, but to the gates, airport, and other passenger experiences. Â I canâ€™t wait to see how some of these changes will play out.

Note: United providedÂ the author’s flight to/from ORD and accommodations during hisÂ visit — all opinions are his own.Â

Not impressed. Can’t come close to United’s international competitors such as British.

As someone who is in a UA club nearly every week, I’m glad they’re finally making some changes.
Still a long way off from other Star Alliance lounges but it sure beats plastic cheese and dry crackers.

I’ve always thought there are 2 settings you should almost never want to eat or drink, hospitals and airplanes. So when I saw the “UPDATED” United menus, I had my reservations (no pun intended) I suppose we’ll have to wait and see what kind of reviews people give.

Great items from you, man. I’ve be mindful your stuff prior to and you are simply extremely fantastic. I actually like what you’ve obtained right here, really like what you are stating and the way through which you say it. You are making it enjoyable and you continue to take care of to keep it sensible. I can not wait to read much more from you. That is really a great web site.

Glad to see the upcoming UA Club changes. I will be flying into LAX on a weekly basis and looking forward to the improved food choices, increased outlets & hopefully updated lounge furniture. The domestic airline owned (as opposed to AE Centurion) club lounges will probably never be on the same par as their international counterparts but at least United is headed in the right direction. Hey, thanks for also publishing the proposed menu.

I just recently spent time at the United Club – Terminal D at IAH airport (Houston Bush). The food options are really nice and are really filling. We had cheese and crackers, bread, soup, coffee, bell peppers, pita chips, trail mix, and more. I have recently visited the American Airlines lounge at LAX and the food options there were horrendous (only bad peanuts and pretzels). The lounge at United Club – Terminal D were a nice healthy and substantial pre-flight snack.

Another positive about the club is that it is three levels – you ‘check-in’ on level one and majority of the people are on level 2. Level 3 is a lot quieter as not many venture up to that level. They also have great open windows to look at the planes. The wifi is free and very fast as well