Today, a Germanwings Airbus A320 (registration D-AIPX) crashed in the Alps in southeastern France. The aircraft was carrying 144 passengers and six crew members and there are no survivors. The flight left at about 10:01am local time from Barcelona and was on its way to Dusseldorf. The crash happened near the village of Prads-Haute-Bleaone, at an altitude of about 6,550 feet. The search will be difficult, since the plane crashed in a remote, mountainous area.

The captain of the flight had over 6000 hours in the A320 and over 10 years experience. The aircraft, D-AIPX, was first flown in 1990 and delivered to Lufthansa on Feb 5, 1991.  The plane was briefly put into Germanwings’ livery in 2003 before going back to Lufthansa. Then in January 2015, it was put back into the Germanwings’ fleet. Germanwings is wholly owned by Lufthansa. 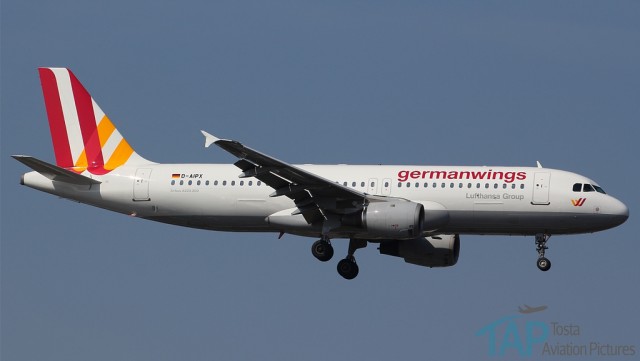 Due to nightfall, the search efforts have been called off and will resume after the sun rises. Military troops are stationed in the area to assure that the crash area stays secure.

They have found one of the black boxes, which should contain valuable information on why the airplane crashed.

Airbus has released a statement on the crash:

Airbus regrets to confirm that an A320 operated by Germanwings was involved in an accident around 11:00 (local time) today near Prads-Haute-Blone in the French Alps. The aircraft was operating a scheduled service, Flight 4U 9525 from Barcelona, Spain to Dusseldorf, Germany.

The aircraft involved in the accident, registered under D-AIPX was MSN (Manufacturer Serial Number) 147 delivered to Lufthansa from the production line in 1991. The aircraft had accumulated approximately 58,300 flight hours in some 46,700 flights. It was powered by    CFM 56-5A1 engines. At this time no further factual information is available.

In line with ICAO annex 13, an Airbus go-team of technical advisors will be dispatched to provide full assistance to French BEA in charge of the investigation.

The A320 is a twin engine single aisle aircraft seating 150 passengers in a standard two classes configuration. The first A320 entered service in March 1988. By the end of February 2015 nearly 6,200 A320 Family aircraft were in operation worldwide. To date, the entire fleet has accumulated in excess of 150 million flight hours in over 85 million flights.

Airbus will make further factual information available as soon as the details have been confirmed and cleared by the authorities for release.

The concerns and sympathy of the Airbus employees go to the families, friends and loved ones affected by the accident of Flight 4U 9525.

https://www.airlinereporter.com
5 Things That Bags Hate – An Open Letter From the Pan Am Bag
Visiting King Nut – Snack Provider to the World’s Airlines
2 Comments

Especially in light of recent information about the co-pilot, locking-out the pilot, why is his name not being released? What are the authorities afraid of?
Why, more to the point, is the news media not pressing for this information? What’s IT’s game?

You call this “News”?