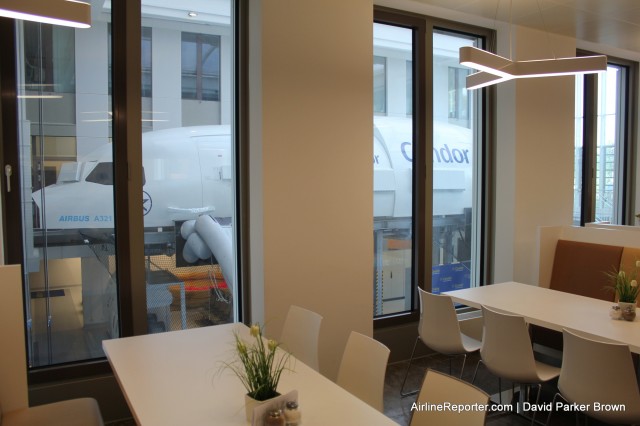 Condor’s HQ is located right next to Frankfurt Airport (FRA) and was a short walk from the hotel that a group of media were staying at; the Steigenberger Airport Hotel Frankfurt.

After getting our badges at the front desk, we headed towards Condor’s 767/A321 trainer. On the way there, we walked through the company’s cafeteria, which was set up quite nicely. One of the best parts — the view.

There were windows that overlooked the training facility and what better entertainment, while having lunch, than watching new hires go own an emergency slide for the first time? 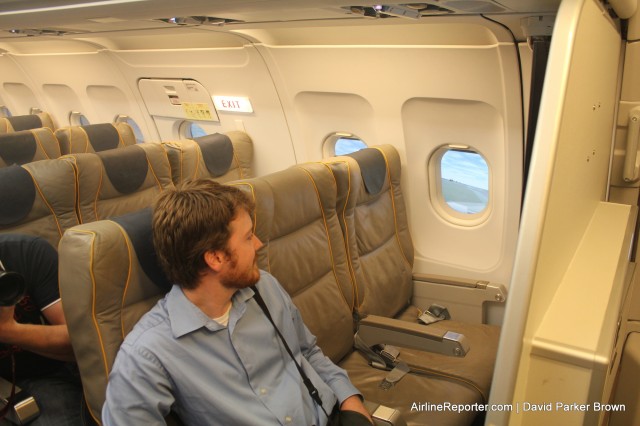 Once entering the large room that contained the trainer, we walked up some stairs and went into the 767. One of the unique aspects of Condor’s trainer was the amount of technology involved. Every window in the fake 767 had its own mini TV screen. This allows the manager to set up a realistic visual emergency to properly test the employees. 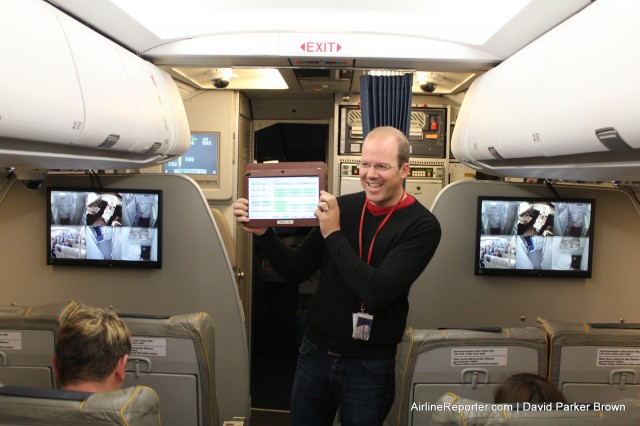 Florian Fuchs, Referent Mandatory Training and Support at Condor shows off how technology is used in the trainer (he was an AWESOME tour guide by the way)

The person in charge of the training is able to use a tablet to set up different situations. It could either be a normal takeoff, a water landing, or even a raging fire outside. Where with most other trainers I have seen, the manager is stuck in a small room running the show, Condor’s staff are able to move around and view the flight attendants from different angles. 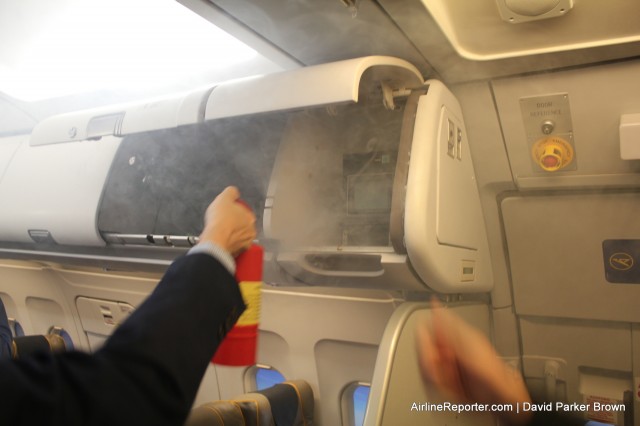 And what better way to add to the realism than a little fake smoke? The 767 was not only able to have a small amount of smoke come out of an overhead bin to simulate a fire there, but the entire cabin can be filled to create the feel of a larger fire. 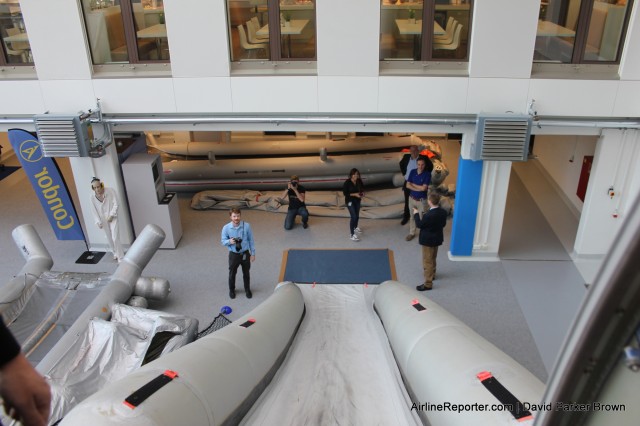 It looks a lot steeper from above than below

We wrapped up on the overview of what the 767 trainer could do, so it was time for us to leave. We already tried the stairs coming up, so we figured it was time to take the slide down.

Now, I have had the opportunity to go down an emergency slide before. However, it was a bit smaller (Fokker 100 vs the 767) and since I was filming previously, I sat down first, then pushed myself off. Not the proper procedure, of course, and I wanted to do the “jump” out of the plane. 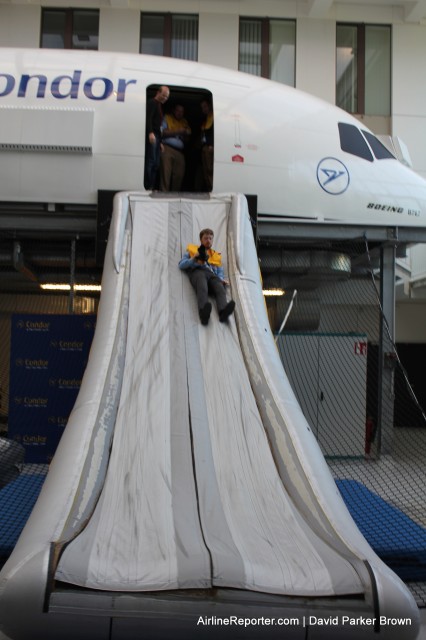 Jeremy slides down to safety

Not going to lie, I was a bit anxious. This slide was longer and steeper than the Fokker, and of course I was jumping into it this time versus just sitting down and pushing. But I just jumped — and it was awesome. I got to the bottom and was asked if I wanted to do it again — well heck yes!

I feel this might be a good time to point out that yes, I was having fun doing all of these things. But I also understand that this training is very serious business and is designed to save lives. By having fun, I am in no way trying to disrespect that hard work that the people at Condor and others around the world do to keep passengers safe.

On that note of learning about safety, while having a little fun, some in the group started to ask about how real life vests work. Instead of just telling us, Condor showed us. They brought out two real vests, let Ramsey Qubein and Jeremy try them on and pull the tabs — BAM!

They inflated quickly — much quicker (and louder) than I was expecting. Also of interest (as the amazing videographer points out above), the vests were quite cold. I am guessing it has to do with the rapid gas reaction to make it fill with air, but maybe one of you fine readers can explain the process better in the comments. 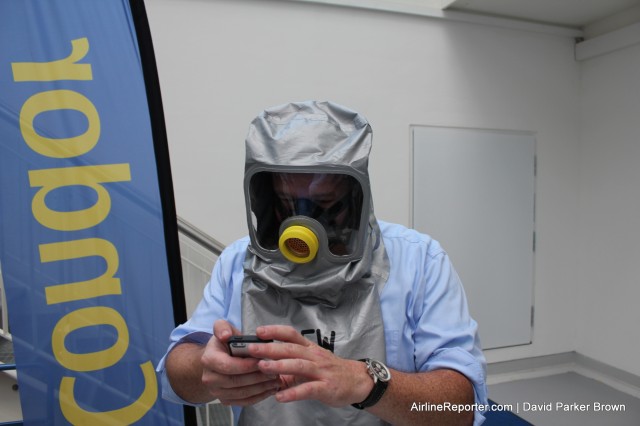 After we were done with the vests, I got to try on some of the firefighting gear that is made available to the flight crew. It was a bit snug for me (and smelled a tad weird), but something that would be very important in trying to put out a fire with smoke inside the cabin. 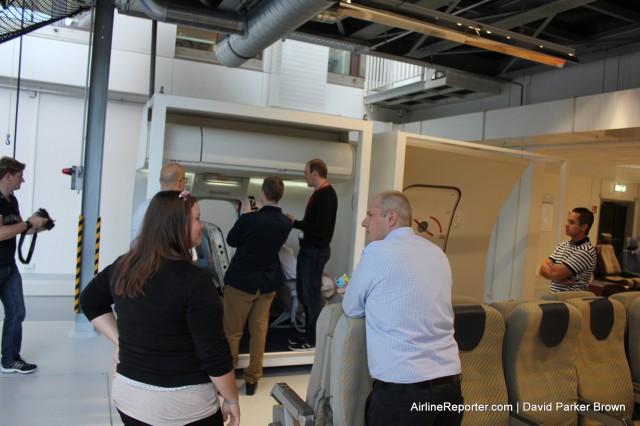 Our group took turns opening and closing the trainer door

Once I removed the fire gear, we went over to a few door trainers. On the first, we were able to practice opening and closing one of the main doors on the 767. The mechanics make it quite easy to open and close them, although they are quite heavy. 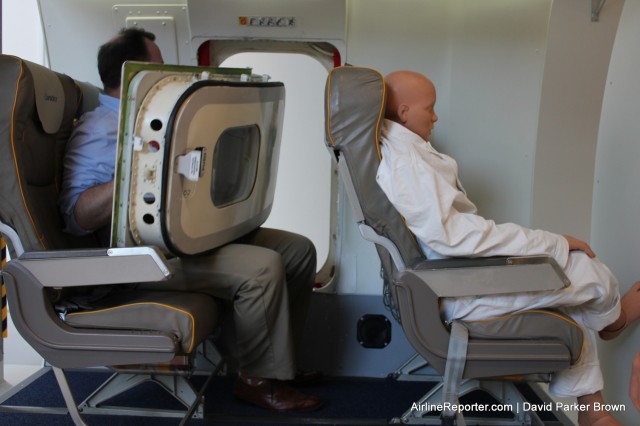 I use my strong muscles to get the door off

The second was an older, over the wing, emergency exit trainer. With this one, a passenger (or flight crew) has to unlatch the door and then maneuver it onto the seat. It is not easy, nor light. Luckily, the exits of newer planes will open to the outside, are hinged, and much easier to open and get passengers out. 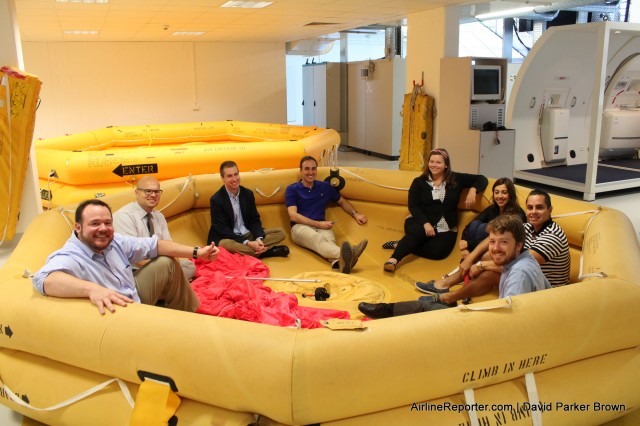 A great group of people!

After all this hard work with the doors, we figured it was time for a photo opportunity with everyone in one of the large emergency rafts. 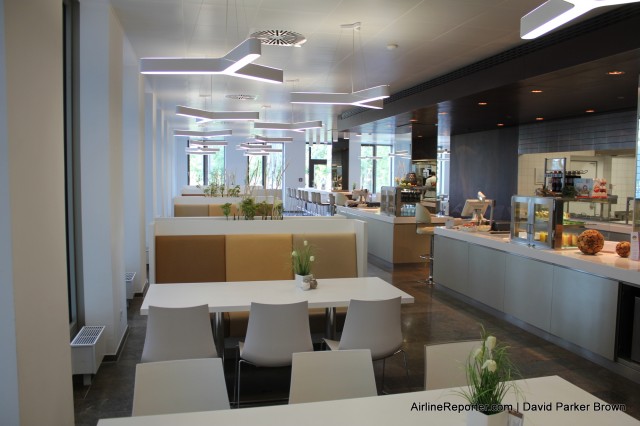 One section of the Condor cafeteria

We wrapped up the training portion and grabbed some lunch in the cafeteria (the food was quite impressive and I even hate calling it a “cafeteria.”)

It is an impressive training facility; especially for an international airline that is not that large.

https://www.airlinereporter.com
Delta Air Lines and Down Syndrome Community of Puget Sound Head to the “North Pole”
Virgin America — Still Got It?
3 Comments

Do you have a few more trips like this lined up in the new year? This and the TAM stories have been excellent. I’d be interested in how a regional like Horizon or a small commuter like Cape Air trains.

Nothing in the works right now, but typically stuff like this happens pretty last minute. I have been wanting to get us to take a look at a smaller airline’s operations, but typically they are as much into playing ball. But we will keep on trying :).

You are most likely right about the cold coming from the rapid change caused by the gas coming out of the canisters. You experience the same thing in a rapid decompression. If you ever get the chance to experience an altitude chamber they will likely show you that. The temperature drops and you often get fog because of the temperature reaching the dew point.