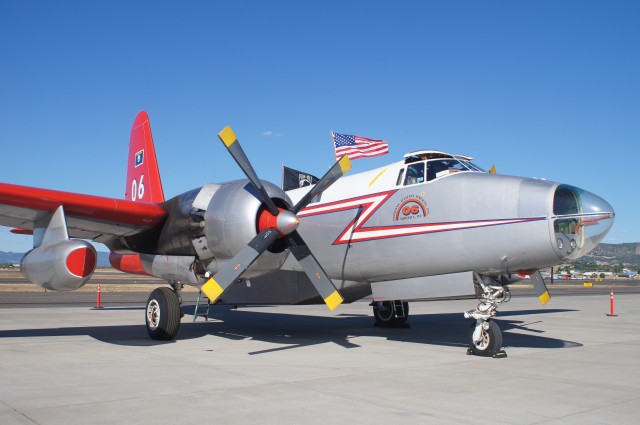 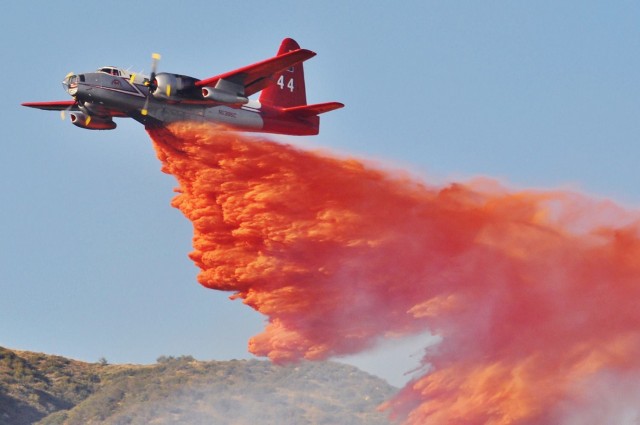 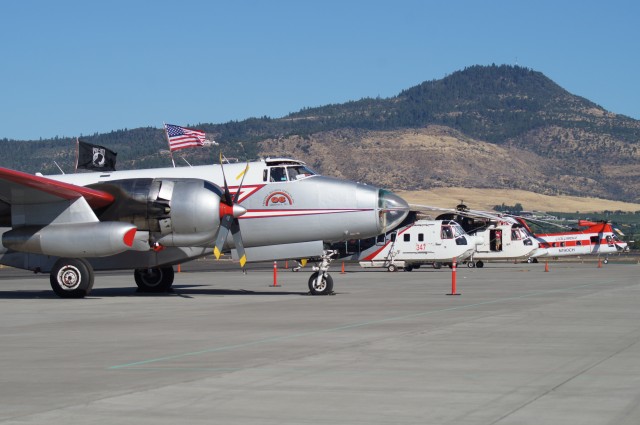 Flight line of aircraft waiting to do their job – Photo: Julian Cordle

When fire season begins, “Air Attack” resources are often moved into the Medford Air Tanker BaseÂ at Rogue Valley International Medford AirportÂ in Medford, Oregon (KMFR), just a few miles from my home. Thanks toÂ Neptune AviationÂ Pilot Chris Holm and COO Dan Snyder, IÂ had a chance to sit down and talk fire suppression tactics, learn the recent history of aerial firefighting (AF), and even get up close and personal with the aircraft serving in these critical roles.

One of the first things I learned from Chris is that the best AF pilots need to be as good at understanding fire behavior as they are flying aircraft. Chris, for instance, spent years on the ground in firefighting handcrews before deciding to take on the challenge of flying Air Attack aircraft, which heâ€™s been doing since 1997. This experience on the ground has given him keen insight into where and how to execute drops, and it also makes him a valuable resource to incident commanders, who often must rely on “eyes in the sky” to see the movement of a fire.

If that wasn’t enough, AF pilots must execute difficult maneuvers through mountainous canyons, valleys, and populated areas. Have you ever seen a DC-10 fly nose-down a mountain ridge in “full dirty” flight configuration while unloading 100,000 lbs. of “mud”? Brace yourself, becauseÂ here it is. 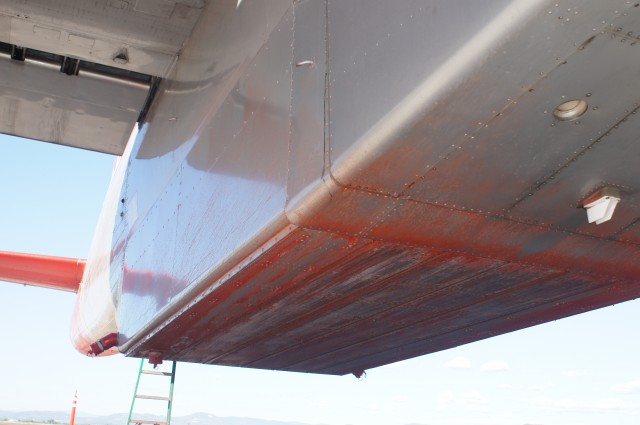 Some of the “mud” left on the tail of the aircraft – Photo: Julian Cordle

“Mud” is the not-so-friendly name for fire retardant. Biodegradable chemicals are added to water to help the mud “stick” to trees and foliage, and an iron-red dye helps pilots easily locate existing drops from the air. Mud is relatively dense, coming in at about 9 lbs. per gallon. In order to do its job, AF pilots must drop the retardant at about 150 feet AGL at a speed of 120-130 MPH. Any slower or higher, and the retardant has a tendency to disperse into a useless mist before reaching the forest. Any faster or lower, and the retardant will splatter itself to only one side of the trees and vegetation, allowing the fire to burn through the line. Itâ€™s a delicate balance to get the retardant to float perfectly onto the trees with just the right coverage.

Except for “scooper” aircraft and “helitack” efforts (rotary-wing), most aerial firefighting work in our area involves air tankers dropping retardant on location, thenÂ returningÂ to “base” to land and get reloaded with more mud. ContraryÂ to popular belief, mud is rarely dropped directly onto a burning fire, unless there is an imminent threat to life or property. Instead, pilots drop lines of retardant and use “anchor, flank, and pinch” tactics to surround the fire, or at least suppress the advancement of it while ground crews build more permanent fire lines with teams of men and equipment. 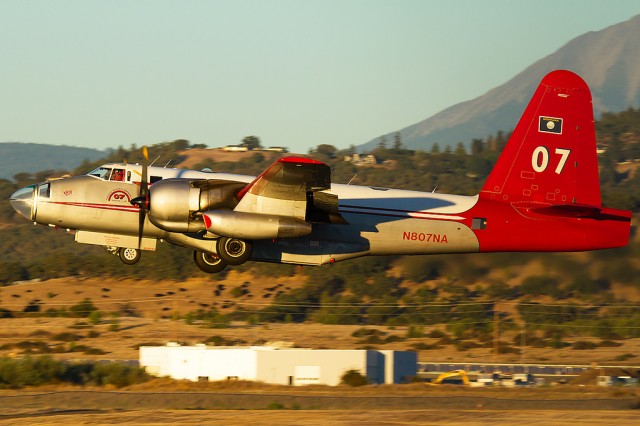 It sounds simple, but it’s clear from my discussions with Chris that his calmness and humility hide just how important his years of experience working to understand fire behavior are. The danger to human life cannot be overstated. As an example, he warns that due to the natural tendency of flames to burn up the trunks and branches of trees,Â fires traveling uphill burn fiercely and are extremely fast, intense, and difficult to stop. He approaches those situations with special respect.

As if all that wasn’t enough, aerial firefighting has had its own demons to contend with in recent years. Consider this, from a 2002 report to the USFS and BLM by aerial firefighting industry experts:Â “The safety record of fixed-wing aircraft and helicopters used in wildland fire management is unacceptable.”

The 2002 season was an especially deadly year for aerial firefighting, withÂ two separate high-profile in-flight breakupsÂ of air tankers resulting in a number of fatalities.Â Chris remembers this time well. After all, aerial wildfire pilots, even pilots from different organizations, often work side-by-side fighting the same fires, so it was his friends and colleagues who lost their lives in those accidents. 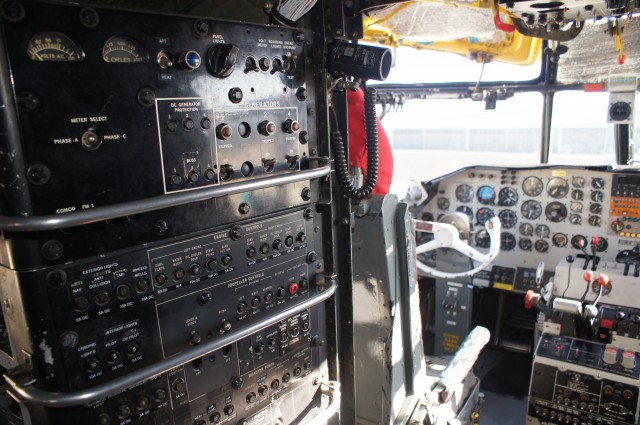 Until 2002, conversions of older aircraft intoÂ air tankers was generally believed to be as safe as the aircraft’s original design role, as long as aircraft maintenance was consistent and timely, and that aircraft were not overloaded (in respect to their original design limitations). Basically, it was assumed that the air tankers, even old ones, could safely be flown indefinitely, as long as the manufacturerâ€™s maintenance schedules were adhered to.

What the report concluded, however, was that a combination of factors, including a lack of FAA oversight into air tanker safety operations and the USFS’s own internal pressure to award contracts based primarily on the lowest total cost for services (read “oldest and cheapest aircraft”) led to an environment where these disasters could occur. The effects of this brutally honest investigation were immediate and powerful. In short, the report caused a reboot of ALL air tanker operations, including a command by the USFS to immediately ground older tankers outright until newer safety standards could be established and the planes could be proven safe. 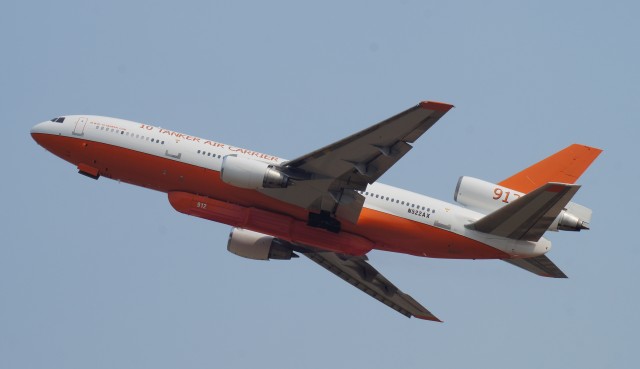 Today, Chris tells me, in large part due to the events of 2002, we know far more about the true “cost” of aerial firefighting on the reliability of older airframes. Maintenance intervals are shorter, and firefighting missions are assigned a multiplier penalty that calculates flight hours at a faster rate than standard flight hours. Neptune Aviation, in particular, has invested substantially into the safety, reliability, andÂ efficiencyÂ of the aircraft they fly, spending millions of dollars developing their own top-notch testing and analysis equipment, maintenanceÂ programs, parts warehousing and tracking, andÂ tear down/rebuildÂ processes. 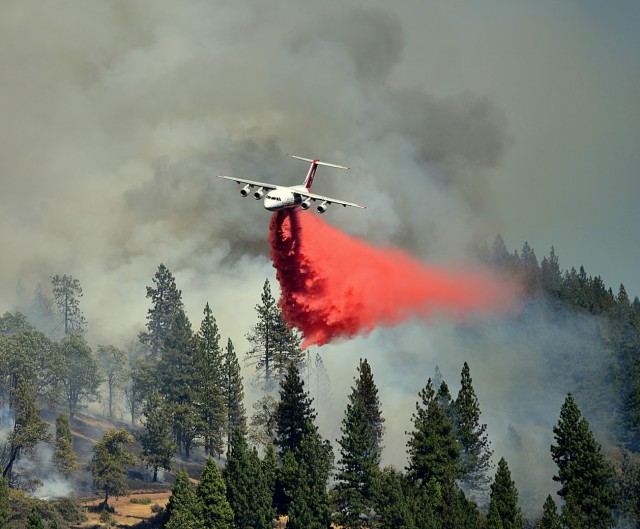 Currently, Neptune Aviation operates seven older Lockheed P2V Air Tankers, which are based on designs dating back to 1945. In the next section, we’ll look at how Neptune Aviation keeps these older tankers flying safely under heightened regulations, take a look at the new BAe-146 Tankers, and, through sheer luck, see what it’s like to be on the ramp of a major airport when aerial firefighting operations are conducted on the busiest day of firefighting in years.

Great story! Wish I was the reporter on this one!

Thom – Glad you like it. It’s been great fun to get up close with these birds.
Part Two will have some pretty cool details on the aircraft. Stay tuned!