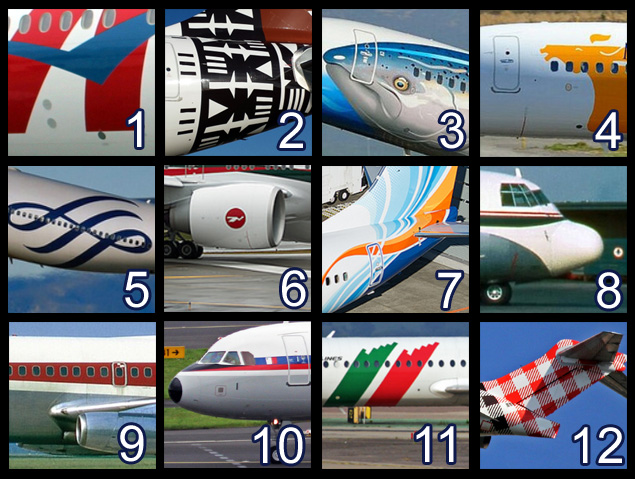 I think this challenge was a nice mixture of easy and hard liveries/airliners. Some of you were amazing and got all 12. Many of you were very close. Others took a nice stab at guessing. Without further adieuÂ — here are the answers:

It seems that #5 and #10 threw off quite a few people. I was surprised how many of you got #9. As always, I am super impressed with how you fine folks do. I don’t think I would have gotten but 75% of these if I wasn’t the one tracking down the photos.

Have a great weekend!

Number 8 really stumped me, and then I clicked the Airliners Gallery World Airline News link in the blogroll, and lo and behold there is the full pic! I had made my guesses already,but it was neat to see the Herc in Delta colours

This design is spectacular! You obviously know
how to keep a reader entertained. Between your wit and your videos, I was almost
moved to start my own blog (well, almost…HaHa!) Wonderful job.
I really enjoyed what you had to say, and more than that, how you presented it.
Too cool!

I VISITED BY MANY AIRLINES . AEROFLOT , AIR INDIA & UZBEK ARE THE MOST THIRD CLASS AIRLINES , I THINK .