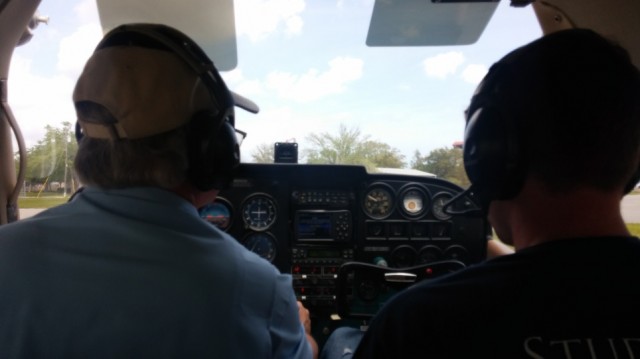 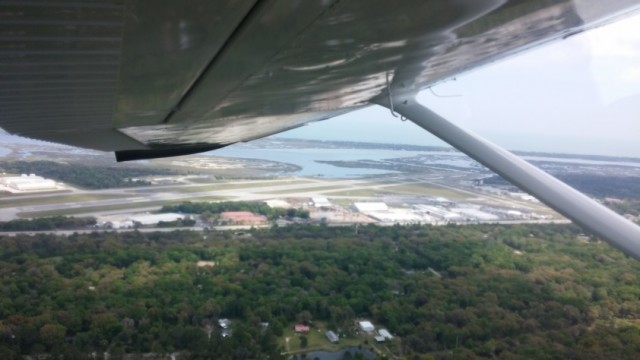 A portion of the film needed to be shot inside an aircraft, so the audience can see the boy bond with his father in the skies. My group partners and I decided to see if one of our aviation professors, a retired airline pilot, would like to be cast in our film as the father, seeing that we also wanted to use his private aircraft for shooting scenes. When our professor agreed, we established a date and time to go up and grab footage.

When the day finally came, I was as excited as a little kid on Christmas. We showed up early in the morning to the GA ramp at the airport, and the aircraft was already pre-flighted for departure. As we sat in the cabin of the Cessna 172 Skyhawk, I couldn’t help but wonder how it took so long for me to have this opportunity.

Skipping ahead to departure, we taxied to the hold short line and sat on the tarmac for about a minute, before the tower gave us clearance to leave. As we rolled down the runway at the Northeast Florida Regional Airport in St. Augustine, I could feel the goose bumps run through my arms and legs. The experience definitely was something new compared to the traveling that I do every summer; mostly flying on a Boeing or Airbus out to the West Coast. 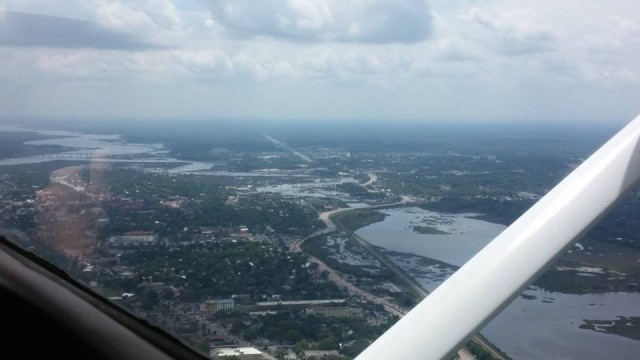 When we took off, I could immediately feel the turbulence. Despite wearing my seatbelt, I was shifting back and forth in the backseat of the 172. The cabin of the Skyhawk was so loud I couldn’t even hear what my partner and professor were saying, unless I had my headset plugged in. Once we climbed a few hundred feet, we banked left and circled over the city of St. Augustine, the oldest colonized city in the United States, and flew up and down the beach. Needless to say, my phone, and eventually my Facebook page, got infiltrated with pictures of this glorious adventure.

Not to worry, though – despite my sincere excitement, I was able to pull out the camera and obtain the necessary footage we needed for our production. I filmed from a variety of angles; a few scenes of watching the pilot and co-pilot conduct some maneuvers, clips of the beachfront, and the partly cloudy weather ahead of us. Once we landed, I jumped out of the aircraft to film them taxiing back to the ramp. After the aircraft was parked, we looked over the footage and were satisfied with what we had. That 30 minute flight was an experience I’ll never forget. 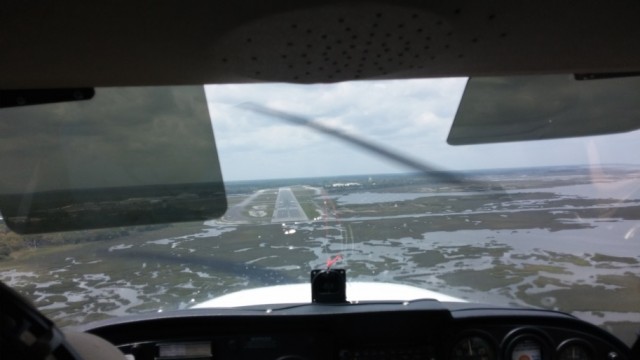 Here we are on short final approach back in to KSGJ – Photo: Steven Padachuk

Unfortunately, a few weeks later, as we were preparing to finish our production, the film equipment we used from the class ran into major technical difficulties and had to be replaced. Since the semester was almost done, the project, unfortunately, was never completed.

Despite our technical issues near the end of our production, I had an absolute blast during my first flight in a general aviation aircraft. Over the past few years, I’ve debated whether or not to go for my private pilot’s license for recreational purposes. After my first time going up in a Cessna, I can say I am more motivated than ever to grab my territory in the skies!

This is a guest story written by Steven Paduchak for AirlineReporter.