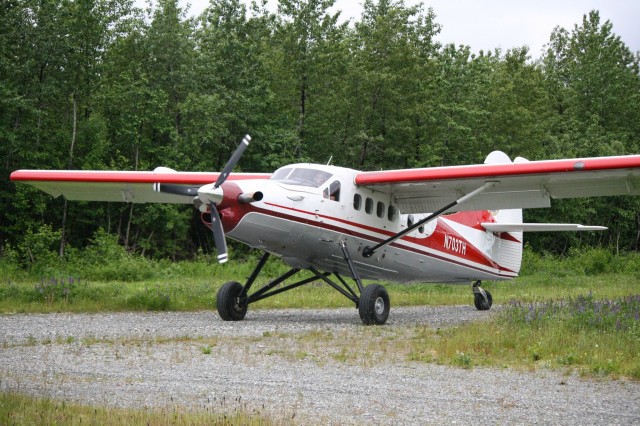 Having recently embarked on a fair number of adventures around the world, one of the questions I sometimes get asked is what my favorite airline is. Â No one expects the answer: Yakutat Coastal Airlines.

Never heard of them? Iâ€™d be surprised if you had. Â Their fleet is pretty limited, at two aircraft, and they only have one full-time pilot, Hans Munich. The passenger experience is a bit different as well. Â The seats are uncomfortable. Â There is no food or drink available on board. Â You even have to load your own luggage into the hold. Â But youâ€™re not going to find many others operating the charter routes they do, and the in-flight views couldn’t be any better.

OurÂ flight was the culmination of a grand adventure my wife and I took, along with a small group of friends, in the summer of 2012. Â The main reason for the trip was a twelve-day whitewater rafting trip on the Tatshenshini and Alsek rivers through Glacier Bay National Park (Alaska), Kluane National Park and Preserve (Yukon Territory), and Tatshenshini-Alsek Park (British Columbia.)

Just getting to the starting point of the rafting trip was a logistical adventure in and of itself. Â It all started with a Southwest Airlines flight from Denver to Seattle, followed by an Alaska Airlines flight to Juneau, Alaska. Â Then, we hopped on the Alaska State Ferry for a spectacular four-hour trip up the Lynn canal to the small town of Haines.

In Haines, we stocked up on food, rented rafts and other gear, and hired transport for the final 100-mile drive to to the north. Â Our launch point into the wilderness was at the end of a rough road in Yukon Territory, at a place called Dalton Post. We spent 12 days on the Tatshenshini and Alsek rivers running rapids, watching Bald Eagles soar overhead, embarking on some magnificent hikes, and trying to avoid grizzly bears.

The last few days of the trip brought us over the international boundary and into Glacier Bay National Park, where we had the opportunity to get up close and personal with glaciers. The highlight of the river trip was floating on Alsek Lake, surrounded by dozens of towering icebergs. Â Once we reached the end of the river trip at Dry Bay, Â there was no road to greet us – a grass landing strip was our only connection back to civilization. 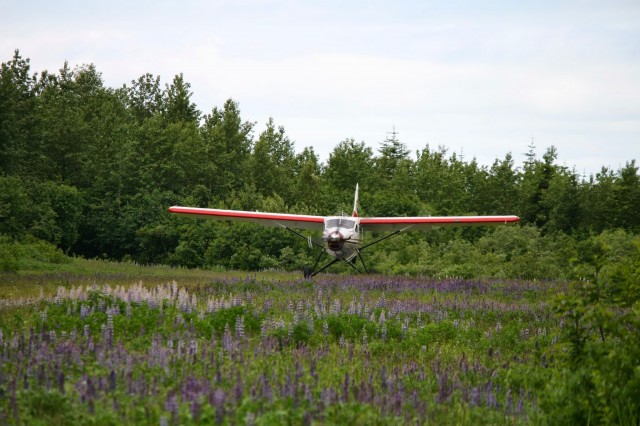 The plane that we had chartered for our trip out of the wilderness was a de Havilland DHC-3 Otter. Â Although this 10-seat aircraftÂ went out of production in 1967, it remains a popular workhorse of the Alaska bush, with both fixed gear and float plane variants. Â Most of the Otters still in use today areÂ modified with a conversion from the original Pratt &Â Whitney Wasp radial engine to a turbine power plant.

This particular plane had been upgraded to a Walter 601 turboprop engine, which provides 657-hp – impressive performance for an aircraft of this size. Â It also hadÂ been fitted with a short takeoff and landing (STOL) kit, enabling landings almost anywhere with some flat-ish terrain. Â When the Otter landed to pick us up, I got my first hint of its incredible short field performance – despite landing on the same end of the strip that we had stockpiled our gear on, it managed to come to a stop and get to us using just a few hundred feet of airstrip. 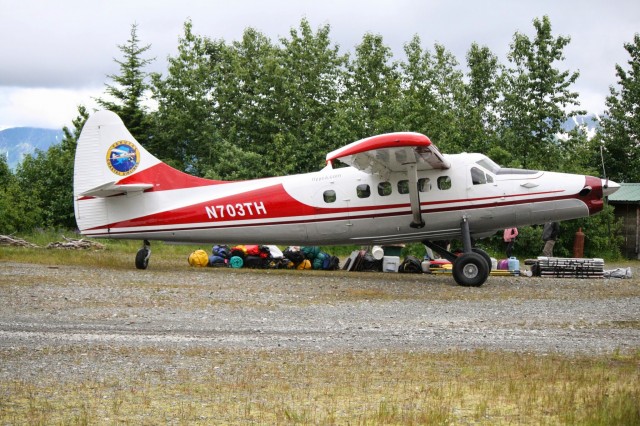 A big pile of gear to load onto the Otter at Dry Bay – Photo: David Delagarza

Loading all of our gear into the plane went quickly – Hans was obviously a seasoned pro at getting everything to fit perfectlyÂ – and we were soon on our way. Â  The first leg of ourÂ flight was back to Haines to drop off our gear with our outfitter. Â This flight took us through the Fairweather Mountains and it would not be exaggerating to say that it was the most spectacular flight I have ever been on.

Despite the â€œscenery overloadâ€ we had experienced in the previous 12 days, all of us were in awe. I went through two batteries on my camera and nearly used up a memory card snapping photos. Â For the next 45 minutes, we flew through narrow mountain passes, next to towering peaks, and over crevasse-filled glaciers. Â I wouldn’t have traded my uncomfortable seat in that plane for any first class A380 suite anywhere. 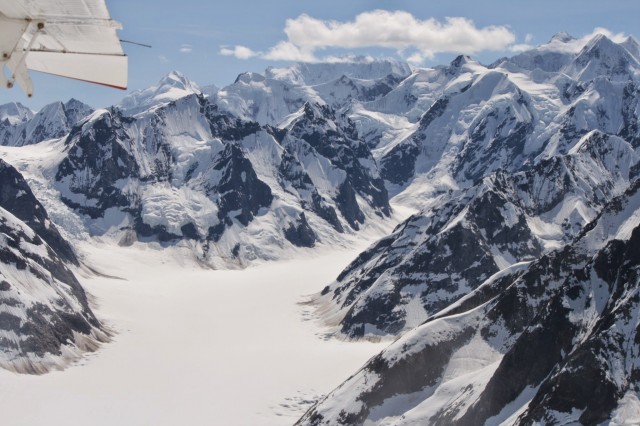 We eventually descended out of the ice age and into Hanies, where we unloaded our gear and said goodbye to one of our tripÂ members who was leaving from Haines. Â The next leg of our trip was a reversal of our previous leg back to Dry Bay to pick up the restÂ of our gear and the remaining people from our trip. Â For this leg, we switched seats and I got the best seat in the plane. 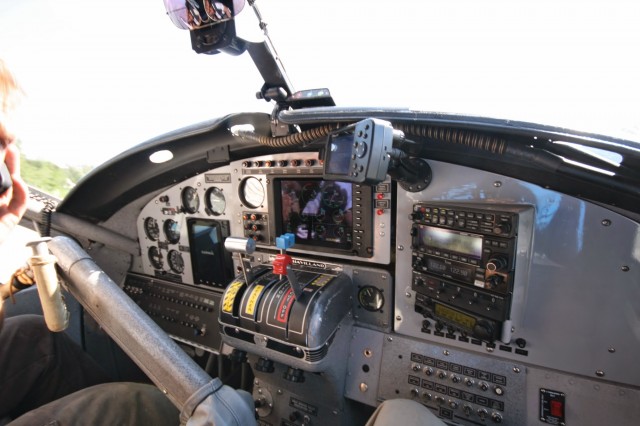 The best seat in the plane – Photo: David Delagarza

Sitting in the right seat was fun. Â It was interesting to chat with Hans and get a perspective on being a bush pilot in Alaska (which made me briefly reconsider my career options). Â The views from the front seat were great, and I got a better look atÂ just how narrow some of the mountain passes we were flying through reallyÂ were. Â Descending back into the Alsek River valley we got a great last view of the river we had spent the last twelve days on. 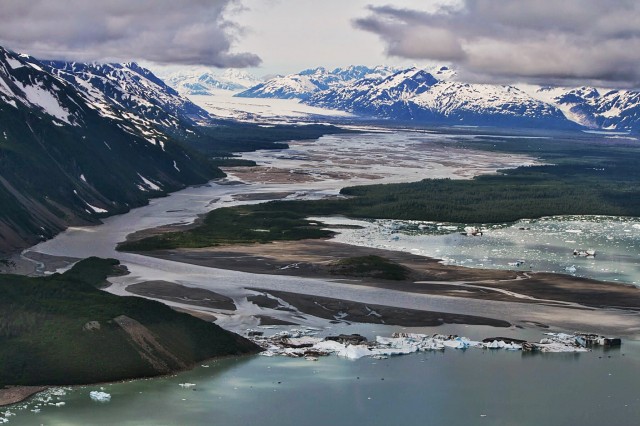 After a brief stop at Dry Bay, we headed north up the coast and landed at the small Yakutat airport. Â Before we were even done unloading our gear, Hans had the aircraft fueled and was reloading the plane for his next flight to a remote fishing lodge. Â Before we could even walk over to the Alaska Airlines “terminal building,” the Otter was back in the air for itsÂ next adventure.

In reality, the Alaska Airlines terminal is a single building on this small airfield. Â Bag check, security, and the boarding gate were all located within one large, partitioned room. Â Most of the people getting on at Yakutat were coming from fishing trips and were checkingÂ rather impressive amounts of their catch. Â Prior to the flight, we had beenÂ a little concerned about how the other passengers on the flight would feel about sharing cabin space with a group who had spent the previous two weeks in the wilderness; however, when we actually saw theÂ other passengers, we realized we were in like-minded company. 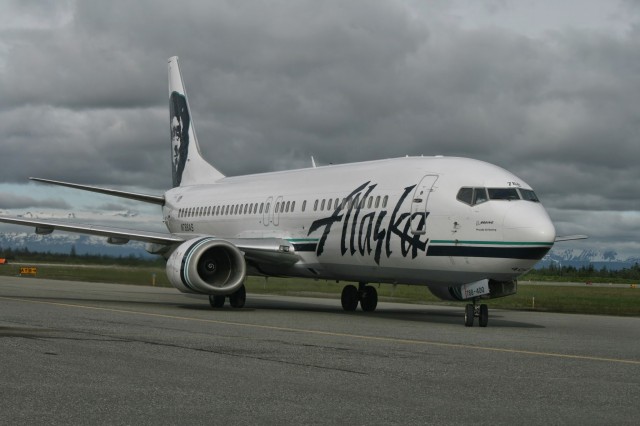 Our ride back to the lower 48 – Photo: David Delagarza

After the flying adventure we had experienced earlier in the day, the trip home on the 737 just wasn’t the same. Â Sure we had some great views of the Saint Elias Mountains as we flew south, and the flight was immeasurably more comfortable (perhaps the onlyÂ time I’ve ever appreciated the relative comfort of an economy seat), but flying over big mountains just isn’t as much fun as flying through them.

https://www.airlinereporter.com/author/davedlg/
Are the ALPA & US-Based Airlines Playing a Game That They Can’t Win?
Etihad Airways Shows Off A380 Residence – A True Class Above First
3 Comments

Hans and Tanya of Yakutat Coastal are one of the best “bush pilot” companies around. Their concern for safety and promptness and accomodating your wishes is fantastic. We have used their services for many years and every year we go up to Yakutat for our annual Salmon fishing trip. It’s really hard to find such great service, compassion, friendliness, and concern for your saftety all in one “company”.