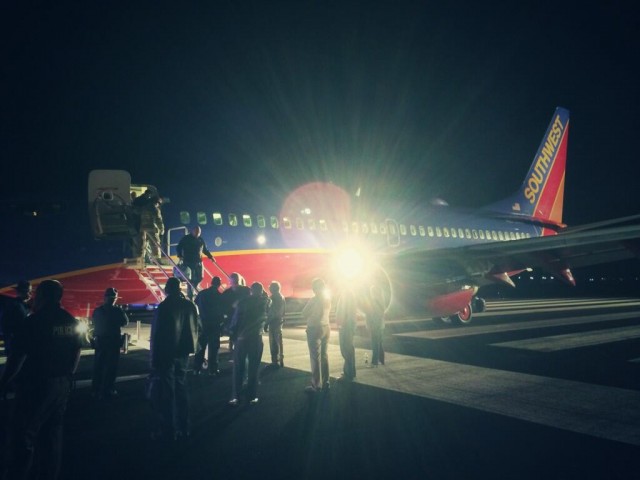 I think the experts at SWA will look very carefully at the performance numbers, but with no load and favorable conditions it should be able to get out. Of course, just like the Dreamlifter before, they won’t attempt it if they aren’t positive it can be done safely. Especially with the cliff at the end of this runway.

Maybe it will just stay as a museum? 🙂

Empty the airplane should be able to get out without a problem but i’m sure the FAA and Boeing will have to bless the flight. 737s regular fly out of Brazil’s Santos Dumont Airport which has runways of 4100 and 4300 feet.

Oh my, he’s on the piano keys.

A light Ferry flight out of PLK shouldn’t be an issue; as 737s routinely rotate at around 3000>3500 feet when departing RNT and BFI!

No problem taking off empty and with only about 8000lbs of fuel to get it to Branson. I’m sure SWA’s techs are checking tires and brakes.

The short-field TO of that B73 won’t be nearly as exciting as the Carpet Dance that the flight crew will be doing when they get back to SWA’s headquarters. Errors like this do suggest a malfunction, but only of the grey matter between the pilot’s ears. There is no legitimate defense for an error of this kind and the training depart does not have a course to overcome inattention and this crew will be extremely lucky if they retain their current employment.