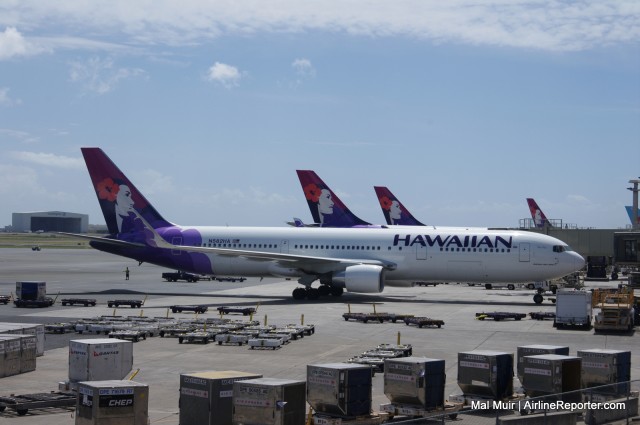 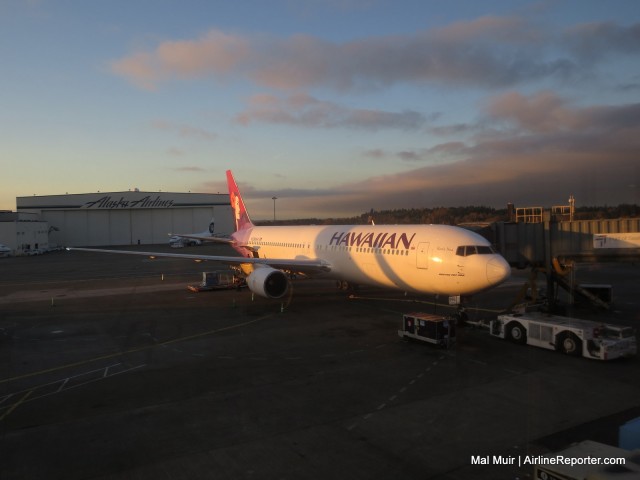 My ride to Hawaii in the Seattle fall sunrise. A Hawaiian 767-300 – Photo: Mal Muir | AirlineReporter.com

Flying out of Seattle on Hawaiian can be a little different than your average departure.  First off, the majority of people are in relaxation mode and even those who are headed over on business are already wearing that staple of the islands, the aloha shirt.  That one piece of clothing to me signifies the ideal that is showcased on all Hawaiian flights; it’s all about the Aloha Spirit.  Aloha means hello in Hawaiian, but it is more than that, it is more of a lifestyle, a show of hospitality, that no matter what you are there to relax and enjoy, no matter what you intend on doing.

The second part that makes Hawaiian a little bit different than most is that there is often two lines at the gate at the airport.  The first is obviously your usual boarding queue, just like any other airline (though less shorts are generally evident when heading to Chicago) however the second queue is the Ho’okipa Desk.  This second queue is for the in-flight entertainment system purchases which you can pre-pay prior to your flight.   With only an average of 15 tablets loaded onto the 767 aircraft, the sooner you book these the better, as they can sell out fast.  The tablet entertainment system comes pre-loaded with a generous selection of movies and tv shows, along with music – at a mere $15 it represents a really good value (if there are still any available onboard, there is a $2 additional charge).  Of course, you could just stick with the free onboard options, but the fact that you have a choice, and you can arrange it while on the ground, is something no other airline offers domestically. 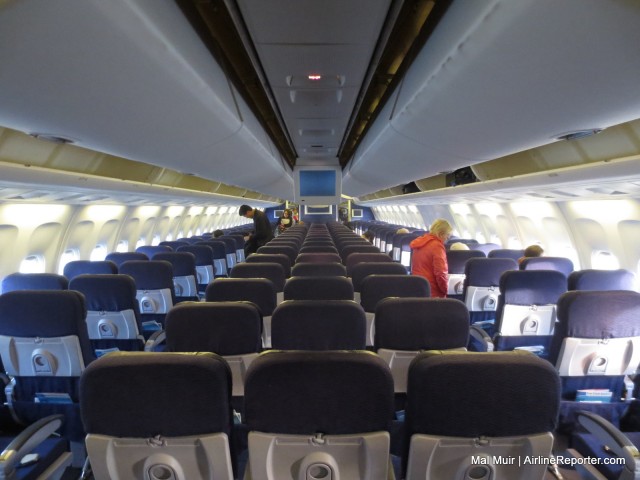 No seatback TV’s in Economy Class on this Hawaiian Airlines 767-300. Make sure to rent a tablet or BYO! – Photo: Mal Muir | AirlineReporter.com

Climbing out of Seattle and turning west is a bit of a weird feeling, as there is nothing but ocean out there, but that’s where you are heading, way out to the middle of the Pacific Ocean.  While we climbed to our cruise altitude, the crew were not ashamed to promote the fact they provided complimentary meals at meal times.  Not expecting much for the meal (who does in economy these days), I was surprised on two levels for my complimentary ’œbreakfast’.  I had read online that the meal would be a ’œfruit and cheese’ plate, and expected some plastic American cheese and a grape or two like some airlines might supply.  I was pleasantly surprised – the fruit was ample, fresh, and delicious, a great starter to a tropical holiday.  Given the fact that it was served with a macadamia chocolate was just a bonus. 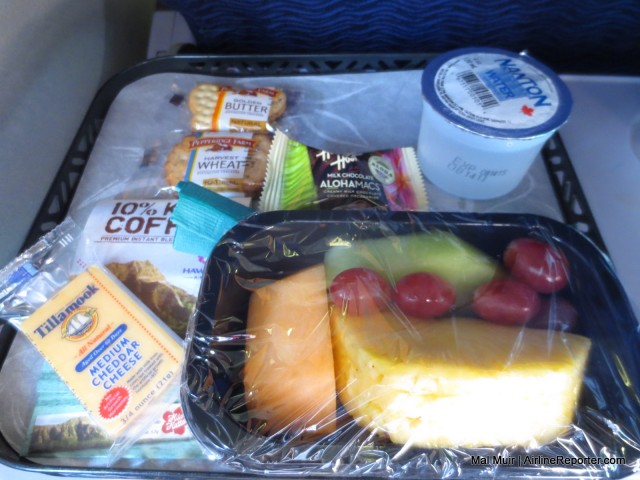 The second thing that surprised me was the real cutlery that was used.  No plastic on this flight, it was metal all the way!  The metal fork made it so that I could enjoy my fruit without having to use my hands, and was such a shock, as I don’t think some airlines provide that to their premium class guests, let alone all guests in economy.  Two big ticks for this avgeek! 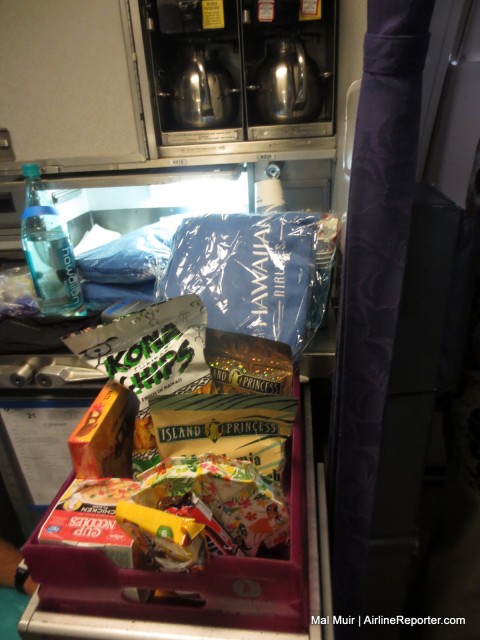 A variety of snacks are available for purchase at any stage during your flight on Hawaiian – Photo: Mal Muir | AirlineReporter.com

Complimentary entertainment on the 767 was a main screen movie (Iron Man 3) or the radio channels (all featuring that “aloha spirit” of course).  Add in the Hawaiian snacks that could be purchased and the drinks that scream “aloha” (Kona coffee, anyone?) you have a reassuring start to your trip.  About an hour out from Honolulu, a second service began, this time offering all of-age guests a complimentary Hawaiian Rum Punch.

Descending into HNL the blue ocean brought with it the green of the islands and the red volcanic dirt that seemed to be present all around the island chain.  Seeing reefs surrounding long stretches of sand or waves crashing against the beach brought an excitement to the cabin, knowing that they are ever so close to fun and enjoyment.  For an avgeek, the approach to HNL can be even more interesting than the beaches close by.  If you’re lucky you may be landing right next to Joint Base Pearl Hickam (what was once Hickam Air Force Base) and a variety of military aircraft that call this island home.  This trip alone I managed to see all sizes and types of aircraft from giant C-5 Galaxy to the latest in Stealth Fighter technology, the F-22 Raptor (in the past I have even had a rare siting of the E-4, a converted 747 mobile command post). 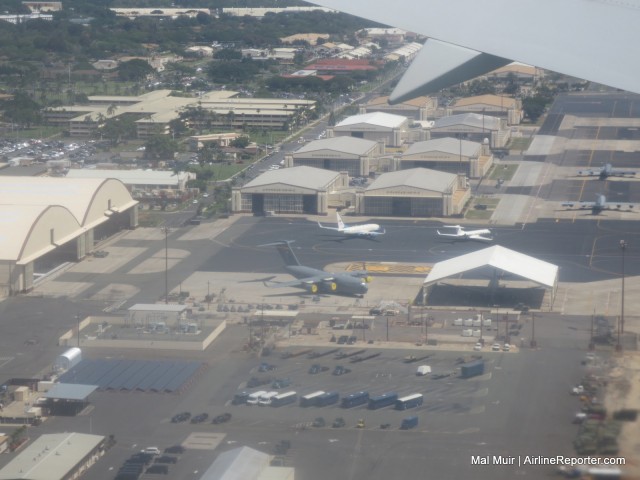 Descending over Joint Base Pearl Hickam allows you to see all sorts of military avgeekery – Photo: Mal Muir | AirlineReporter.com

Hitting the ground at HNL may bring an end to your time onboard Hawaiian, but it means only the start of your time in the Aloha State, where everything you have just experienced is meant to be normal; as you step off your flight into the terminal, you know you have arrived, with the humidity, the sunshine, and the aloha spirit that surrounds you, something a simple Mahalo (Hawaiian for thank you) won’t cover.

The flights in this review were provided by Hawaiian Airlines; all opinions & photos are my own.

https://www.airlinereporter.com
Day of the Turbine (Part 4): The Nolinor Hangar
The Antonov AN-10
7 Comments

Another interesting read, but seemed a bit biased and taking a few jabs at another airline that is frequently written about and praised.

…written about and praised by other writers at this site.

Why do so many travel bloggers seem to use the words less and fewer interchangeably? Less(sic)shorts heading to Chicago? C’mon!

I flew in a Delta 767 from Seattle to Atlanta and other than the fact that the airplane was bigger than the 737, there wasn’t a significant different between than plane and an Alaska 737 on a nearly 6 hour flight in terms of passenger comfort.

dissapointed with this article. Felt abit biased in favour of Hawaiian Airlines.
Maybe so you can get free flights from them in the future. I don’t know?

Yet in your photo you can CLEARLY see like 5 grapes, yet you describe the fruit selection as “Ample!”

Hi Andy. It’s not a bias report other than the fact that I thought it was an extremely good flight.

Your point regarding the Grapes is off unfortunately. When I said that the fruit was ample, there was more fruit than expected. Take for instance the picture of a Delta cheese plate on their eats menu.

That’s a typical offering for any airline with a cheese plate, just a few grapes as “fruit”. But what I got may have only had 5 grapes total yes, but look at the other fruit that is there. I only expected to have the few grapes, not all of it. So although you focus on the grapes your not looking at the whole thing.

Aloha & mahalo for the pictures and trip report, what a great flight you had! Nothing like a big chunk of fresh pineapple! 😉