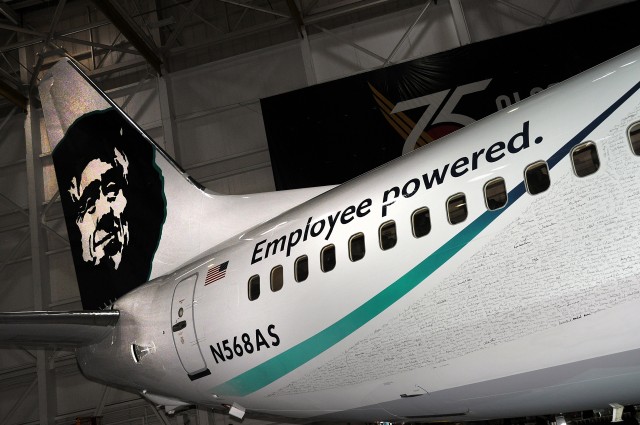 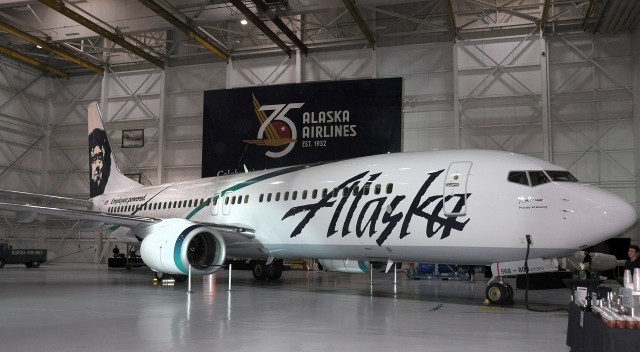 A wider shot of the special AS livery – Photo: Alaska Airlines

Alaska employees gave their signatures during a special training called “Flight Path,” that was created to help everyone gain a better understanding of how Alaska and Horizon operate, as well as sharing leadership’s vision for the next five years.

An ETOPS-rated Boeing 737-800 was chosen to feature the new livery, since it is able to fly more of the airline’s route system, which will allow more employees to enjoy it.

At first glance, the livery might look simple, but it took quite a bit of effort to complete. Typically, it takes about eight days for the standard Alaska livery to be painted on a plane – this one took about 15. According to the airline, technicians began by spraying a coat of clear enamel over the entire aircraft fuselage. Then the signatures are applied using O3 Transfers, which Anthony Johnson, interior engineer and draftsmen states are, ’œlike a tattoo in that the signatures are embedded in the paint.’ A final coat of clear enamel completed the process.

Not to be left out, Horizon will also get a special “Employee Powered” livery on a Bombardier Q400 early in 2014.

For Alaska employees, the biggest challenge might be tracking down their name. Have no worries, the airline thought ahead and is providing a tool which will allow workers to find the location of their name.

Back in the late 1980’s, when Alaska still served meals, I found their service to be a step above their competition. I really hope they can persevere and avoid being gobbled by some mega airline.

Perhaps a bit silly, but nice. It gives the employees a sense of ownership and empowerment. This is good.

Recently, ads, often with huge images, have begun appearing On Top of whatever image opens your daily page, often making it difficult to see the image. I recognize that some advertising is necessary to support your site, but blocking the ‘front page’ is going too far! If it matters, I use Firefox. I’ve not been able to block or remove these ads. When they block a significant portion of your site’s opening page I pisses me off! Please fix this. I’s hate to dump you site, but you should know that you are not the only site delivering this content. Ads are necessary, but splashing them over the open page is NOT cool. I cannot seem to fix it on this end, so I’ll leave it to you. Ads on top of the opening image is going a bit too far and I’m pissed! Got it!
-C.

Hi Cook, Firefox, and Chrome for that matter, have plug-ins available to them that will block the presence of all ads on a webpage, even the pop-up kind. The plug-in that I use is AdBlock.

Of course, if you are using a mobile device, I think you’re out of luck.

From October 21, just now (October 30) appearing as a comment notification? I’ve already responded privately, David; I hope you got it. David, yes, problem solved! The cause was over-exploding the website’s size (and re-centering) as the means to enlarge the text to readable size without glasses. IMO, sidebars, pert of the website or ads, should be limited to 25% of width. That said, this site seems to push it to over 33%; perhaps 40% and I’ve seen a few that approach 50%. The principal reason that I use FireFox is to achieve *slightly* better control over the junk than is available for most of the other browsers. I know that most of today’s websites depend upon ad revenue for some (or most?) of their income, but sites with some even minimal standards won’t accept ads without some degree of control over their placement. All websites reflect someone’s personal standards. Since this is YOUR website, I’d encourage you to view it from an independent source, perhaps daily, just to see what is actually delivered to your readers. If necessary, you may want to adjust the font size of your home-generated text, or at least offer that feature to your readers. When advertizing claims more that ~33% of the display, or some ‘rude ads’ place themselves first, I begin to reconsider frequent visits to the site. I don’t want to dump ARP, but it would be nice to see ARP exert some influence with your service provider. Who runs your site? You or them?
As noted above, I do NOT want to dump ARP. If I am forced to do so, please don’t feel bad as you certainly won’t be the first. Heavens yes! I can easily understand the need to milk the ad revenue for everything that you can get! ARP is no longer a hobby, but a business that must at least pay for itself. Please take a second look at how ARP is displayed via the (3?) popular browsers and what parts of your soul you’ve already sold for advertizing. At some unknown point, the ‘editorial content’ is simply not good enough to override the extreme annoyance of the ads – and and where they are placed. Whether misunderstood or intentional, I do not know. What I do know is that this site and it’s ad display policy is pushing this reader’s tolerance to the limit. I hope you are able to regain some control over your site. Best wishes, -C.

Spectacular problems completely, you only won a new company logo fresh viewer. Just what exactly do you suggest relating to your submit for you to created week earlier? Every convinced?

I just saw this livery while I was taking off from San to Jfk, in my opinion It kind of looks like the united 787 livery.

It’s a pity you don’t have a donate button! I’d most certainly
donate to this outstanding blog! I guess for now i’ll settle for book-marking and adding
your RSS feed to my Google account. I look forward to
fresh updates and will share this website with my Facebook group.
Talk soon!