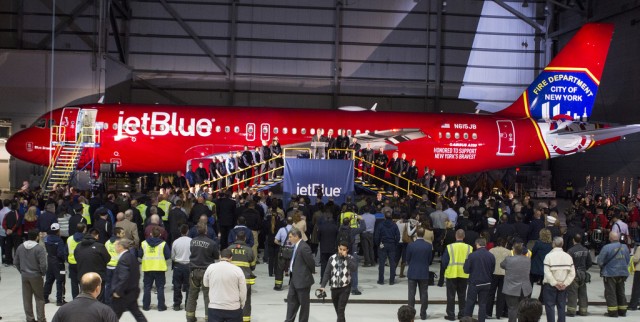 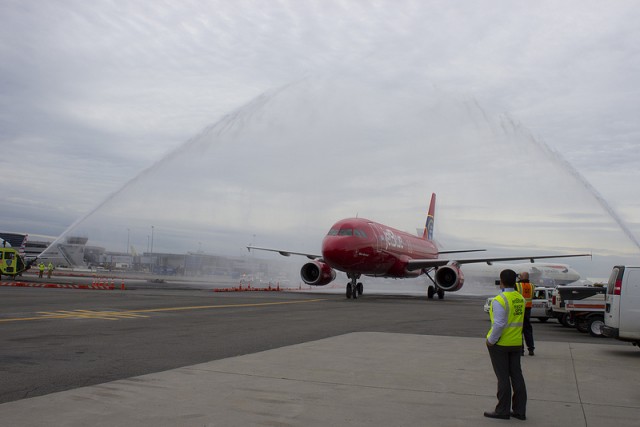 What special fire department livery is not complete without a water cannon salute? Image: JetBlue / Flickr

“We are New York’s Hometown Airline, we not only work here, we live here too,” said Dave Barger, president and CEO of JetBlue Airways. “On a daily basis we see the hard work of firefighters, paramedics and emergency medical technicians who help keep our city safe. We appreciate their dedication and are excited to support our hometown heroes in a very JetBlue way. We’ve substituted our namesake blue and painted this airplane red, a special honor just for the FDNY Foundation.” 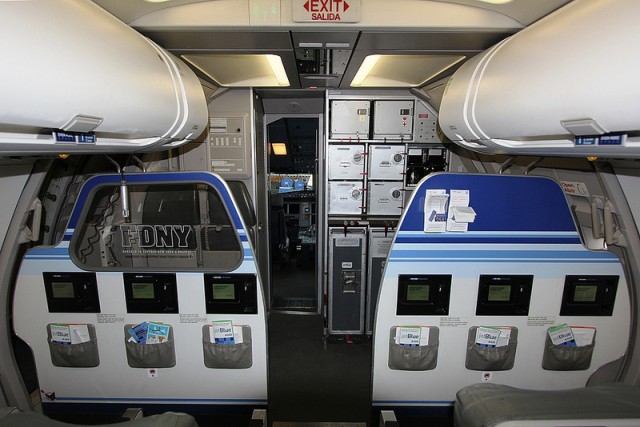 Not too much different, but a little something special for the FDNY. Image: JetBlue / Flickr

A side view of the special livery. Image: JetBlue / Flickr

According to the airline’s press release, “Over the past three years, JetBlue has donated $300,000 in financial support and more than 40 round-trip flights for firefighters to travel to other regions to support their peers in firefighting and related efforts. JetBlue has also provided travel support for firefighters in times of need following Hurricane Katrina, 9/11 and wildfires in California in 2007 and Arizona in 2013, among other events.”
SEE MORE FDNY JETBLUE LIVERY PHOTOS VIA THEIR FLICKR
Airbus A320Airline LiveryFDNYJetBlueLivery of the WeekSpecial Livery

https://www.airlinereporter.com
Flight Review of Westjet Encore: On Board Their Newest Q400
Global Entry & TSA Pre Check: What Is It & Why You Want It