There was a bit of a buzz this week about United Airlines announcing something big on Friday. Â We wanted to be a part of the excitement at AirlineReporter.com (aka @AirlineReporter on Twitter) and were watching United (aka @United on Twitter). Â Odd thing though. Â When I was looking at United’s Twitter page I saw the button that said, “Follow.” Â What? I should have seen “Following,” since the site has been following United for almost ever.

I figured that maybe we had made a mistake and somewhere along the line un-followed United. Either way, I went to hit the “Follow” button again, and instead of re-following the world’s largest airline, I received this message: “You have been blocked from the following this account at the request of the user.”

Uh oh. Did United Airlines break up with AirlineReporter.com and we didn’t even realize it?Â Where did we go wrong?

This is my open letter to you United, begging you to take us back…

UPDATE: Love is in the air! Our blocking has been lifted (a push of the wrong button is likely) and the skies are once again friendly. We are now United’s 300,421st follower, but to us we feel like #1.Â (We are still sharing the letter for fun!) 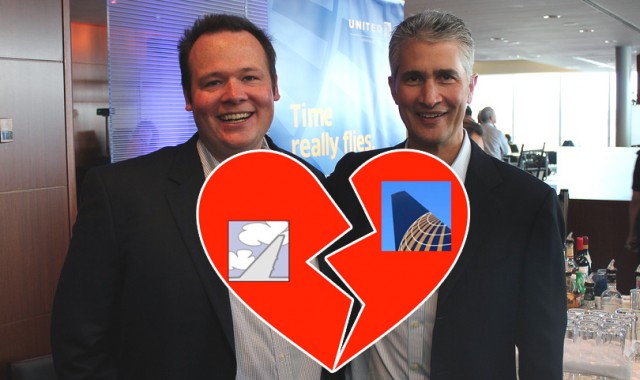 Me (pre-beard) and United CEO Jeff Smisek hanging out at ORD in 2011, during better times.

Hello. Â How have you been? Â I hope that you have been doing well. Â I am really happy to see you have over 300,000 followers on Twitter now. Argh… I can’t keep up this happy facade… we need to talk.

This letter is not easy for me to write, but I am sure you already have an idea what it is about. Â I couldn’t help but notice that you are no longer following us on Twitter. Â Actually it is more than that… you also have blocked us so we cannot even follow you. Â What did we do?

We have a pretty long history and I thought it was mostly positive. Â Sure, there have been times that we have had to point out a flaw or two, but it was only tough love. Â Just because we don’t always love everything you do, it doesn’t mean that we do not love you – we do!

Remember long ago when I got to help push back one of your Boeing 757s at LAX? Â Or how about when we all got to celebrate when your first 787 Dreamliner came out of paint? Â And of course sharing the experience of being on your Dreamliner’s inaugural flight. Â I was even just thinking about when I was hanging out with Jeff (your CEO) in Chicago back in 2011 when celebrating when one of your passengers flying 10 million miles.Â Man, those were the good old days.

I know that you recently went through some pretty big changes. Â That merging of two halves into a new whole cannot be easy and can cause for some hiccups. I never thought that we would be one of those hiccups.

But it looks like you have been doing well recently. Â I mean you are looking good. A new livery, new planes on order, and a fun new advertising campaign. To celebrate you are even holding a fun contest:Â 30 Days of Friendly.Â Â Big problem though. When looking at the rules, you state, “During the Promotion Period, entrant is required to follow @united on twitter…” Â Foiled again – we cannot enter, since we can’t follow you. Â That is okay. Â We understand. Â Sort of. Â Not really.

Look, I am getting myself all worked up again. Â I’m sure this was just a silly mistake and we are still best of buddies.

Please take us back. Â We miss you. Â We want to read your Tweets and we want you to read our Tweets. Â We can make this work and be happy once more.

AirlineReporter is a United supporter!

Yeah, UAL should definitely give you another chance…after all, can anyone remember how bankruptcy proceeding extensions that carrier got back in the early 2000s?

Hello, this is completely off topic. But I’m puzzled by something and I hope you know or have the answer. I know of someone who is trained by Lufthansa (and trained in Seeheim) and says their employer is Lufthansa German Airlines but works for Emirates in Dubai. I’ve tried looking up partnerships between the two and I haven’t found any connection. Could it be that he works for Lufthansa but operated by Emirates? Do you know how that whole thing works?

I think Airline Reporter has been very supportive of United. This is a site that overwhelmingly promotes airlines and civil aviation. I think this has to be just a small snafu.

I stopped following Untied a long long time ago….well actually I never started. Traveling is much more pleasant without them.