A rural middle-America town is transformed each year from small and sleepy to an #AvGeek mecca.  That small town is Oshkosh, Wisconsin, the home of the Experimental Aircraft Association (EAA).  Each year the EAA holds their annual ’œfly-in’ called AirVenture. But it is much more than just a fly-in; it’s a festival of flight.

The EAA started the ’œfly-in’ back in 1953, in Milwaukee.  Soon afterwards, it outgrew that airport, and the show moved on to Rockford, Illinois.  In 1969, the EAA had grown too large for Rockford and needed to find a new home.  They settled upon Oshkosh and, although they started with no facilities, the all-volunteer force that the EAA has been famous for was able to get the site ready for the first show at its new home in time for the 1970 edition.  The show has remained in Oshkosh to this day, and celebrated its 60th anniversary this year.

Most people refer to AirVenture as an ’œair show,’ and while there is a flying program each day, the show is so much more.  The show feels like a small city and the attendance figures match that.  In 2013, there were approximately 500,000 people in attendance over the duration of the show, along with over 10,000 aircraft.  A phenomenal amount of people when you think about it, all crammed into the footprint of a regional airport. 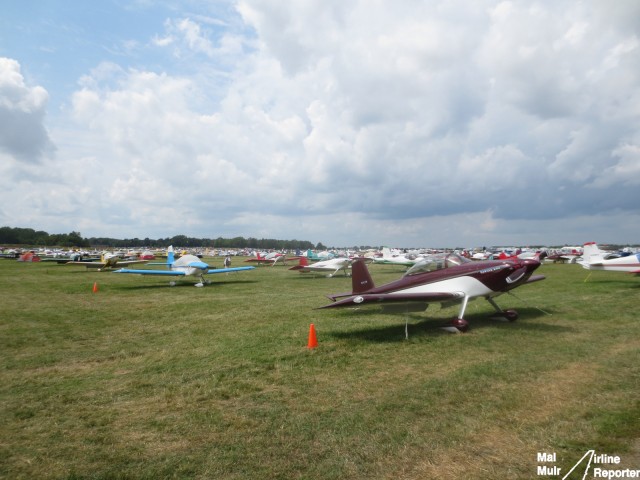 The “North 40” at Oshkosh. Planes as far as the eye can see – Photo: Mal Muir | AirlineReporter.com

Imagine looking down a runway and seeing just thousands upon thousands of small aircraft, literally stacked on the airfield.  That scene is one that made my jaw drop when I first saw the ’œNorth 40.’  But how does the airshow handle so many planes?  They refer to it as the ’œWorld’s Busiest Airport…For a Week.’

Thankfully, small aircraft don’t take up much runway space during takeoff or landing.  With Oshkosh’s long runways, they can split one in to three by placing giant dots on the runway.  Each arriving or departing aircraft is given a dot with their instructions and they treat it like any other runway.  Nothing is more fun than sitting down on the line, listening to ATC, and watching aircraft follow an instruction that says ’œCessna 152, cleared to land Runway 18, Blue Dot.”  Not something you are going to hear at your local airport.

It is not just the sheer size of the show that makes it different.  It’s the very nature of the show that makes it unique.  EAA has its foundation in sport and general aviation, where the home-built or small aircraft dominates.  With a devoted membership of AvGeeks of all kinds, AirVenture is somewhere you can come to not only see the latest aerobatic demonstrations, but can also buy the latest in aviation technology for your plane, or perhaps even buy a factory-fresh aircraft or engine. 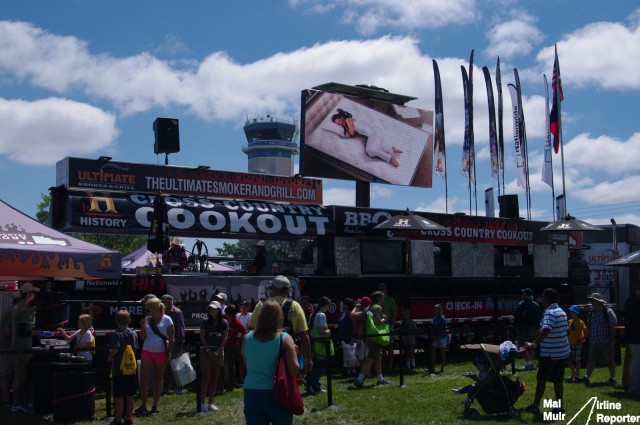 Where else can you visit the largest mobile BBQ truck and chat with a Pit Master (PS, the key is “low & slow”) – Photo: Mal Muir | AirlineReporter.com

However, it’s the unusual features of Oshkosh that really make the show.  Got an aircraft part you wanna sell? Or perhaps you want to learn how to build your own plane?  You’re covered!  You can even discuss an aviation degree with a university or visit the world’s largest BBQ truck to get tips from a real pit master.

With so many people visiting, the local towns around Oshkosh swell to capacity. The local hotels just can’t accommodate that amount of people so many people choose camp at the airport.  Those who fly in can pitch a tent right under their wing, or like many others you can stay in Camp Scholler.  Thousands of people will camp among the masses at the show; it has become a tradition.

Camp Scholler at EAA AirVenture, where so many people will spend their time just yards away from the main airshow – Photo: Mal Muir | AirlineReporter.com

In the end, there is one true thing that makes AirVenture unique – the people.  The show is run by an almost all-volunteer crew – people who will spend their vacation by coming out to Wisconsin and working the show.  The people that attend all love aviation in their own special way.  You can talk air traffic control procedures, or perhaps NTSB investigations over breakfast; the finer points of welding, or riveting wing spars, over a beer.

Oshkosh is a place that all AvGeeks should add to their bucket list, to make that once-in-a-lifetime pilgrimage to what is the most unique aviation event in the world. I will be sharing my experiences over the next few weeks and hopefully you can share yours in the comments.

I read “…to an #AvGeek mecca” as #AvGeek Merica. Which was hilarious. Too bad it was just my mistake. I LOL’d.