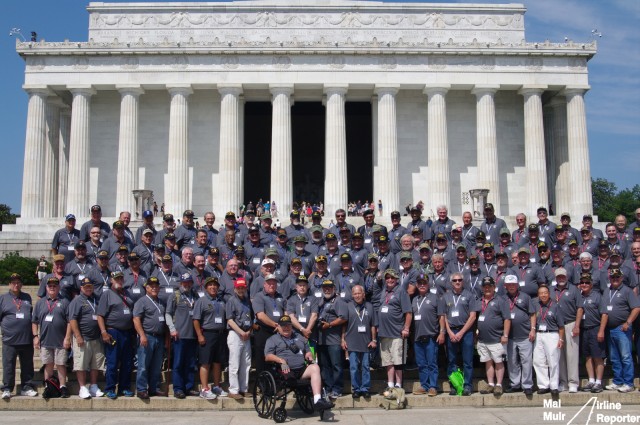 Each one had been selected by the Northeast Wisconsin Old Glory Honor Flight & Experimental Aviation Association due to their service during the Vietnam War.  The four main armed services (Navy, Army, Air Force, and Marines) were represented by the 110 veterans taking the flight. 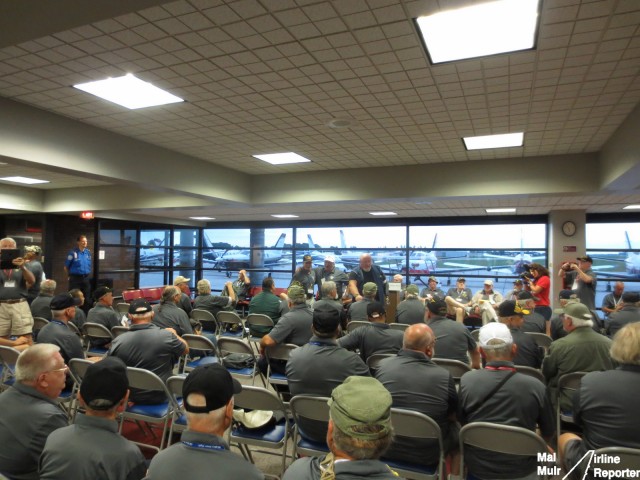 Getting a speech by Gary Wetzel prior to boarding the flight to D.C. – Photo: Mal Muir | AirlineReporter.com

Even though it was early, people seemed to be in a good mood. As the veterans checked in, employees of the airport were offering hugs before they proceeded through security. This was to be the first of many hugs that day.

While we waited to board our specially-chartered American Airlines (AA) 737-800, the vets chatted and swapped stories about their experiences.  Gary Wetzel, a recipient of the Medal of Honor, gave an amazing farewell speech to let the vets know that the feelings and experiences that they would go through were perfectly normal, and encouraged.

As Gary talked about the emotions to expect when they reached the Vietnam Veterans Memorial, he gave some advice; ’œDon’t be afraid to shed a tear. Don’t be afraid to hug a brother.’  This was a very poignant piece of advice, as the experience would not be easy for some.

Soon, the veterans boarded the AA 737 (painted in the new livery). The airline had donated the aircraft for the day, and each of the crew working the special flight had volunteered their time.

The pilots were both veterans themselves; one a Cobra pilot for the Marine Corps and the other an Air Forces F-16 pilot. Also, each of the cabin crew had some tie to the military.

Toni Russell, who works with American Airlines’ Veteran Operations and helped manage the day, commented that she volunteered because this was her way of serving, as she didn’t “wear the boots.’  Toni was happy to assist the veterans since she has family members who have served in every military branch (including the Coast Guard). 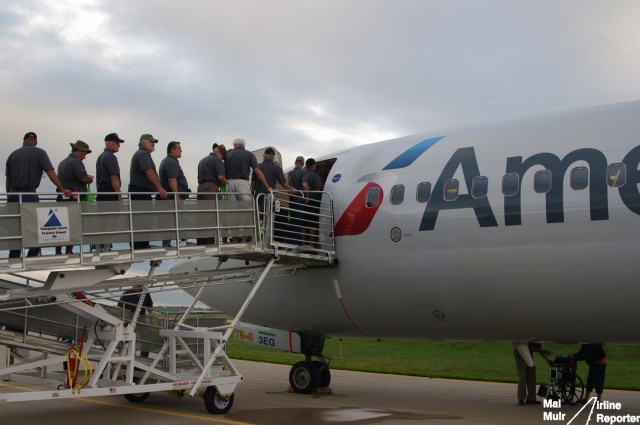 Boarding our aircraft on the ramp at Oshkosh – Photo: Mal Muir | AirlineReporter.com

As we taxied towards the runway, the crew briefed us on our flight plan that would take us from Oshkosh to D.C.’s Reagan National airport (DCA).  We took  a unique route which followed the ’œFreedom 2 RNAV” approach.  The crew briefed us on our route and waypoints, which when strung together form the following combination: HONNR>BRVRY>COURG>PDGE>WEWIL>NEVVR>FORGT>SEP11>ALWYZ>LETZZ>RLLL>VCTRY>HEROO

BONUS: Check out this guide on the initiatives that American Airlines has for its veterans & military members

About the time it felt like we should be taking off, Captain Matt Jaeger explained over the intercom that the tower had requested us to hold for a few minutes. This would cause groans among regular fliers, but on this flight we had a good reason. We had to wait for our escort to line up in front of us – three P-51 Mustangs. Oh yes!

Not long after take off, we left the escorts in our wake (they just could not keep up) and cruised towards DCA.  I had the opportunity to speak to more of the veterans as the flight flew by (no pun intended).

After arriving to a water cannon salute at DCA , the vets disembarked to another warm reception with more cheering, clapping, and hugs.  Then we boarded our charter coaches and were escorted to the Lincoln Memorial by the Rolling Thunder Motorcycle Group. 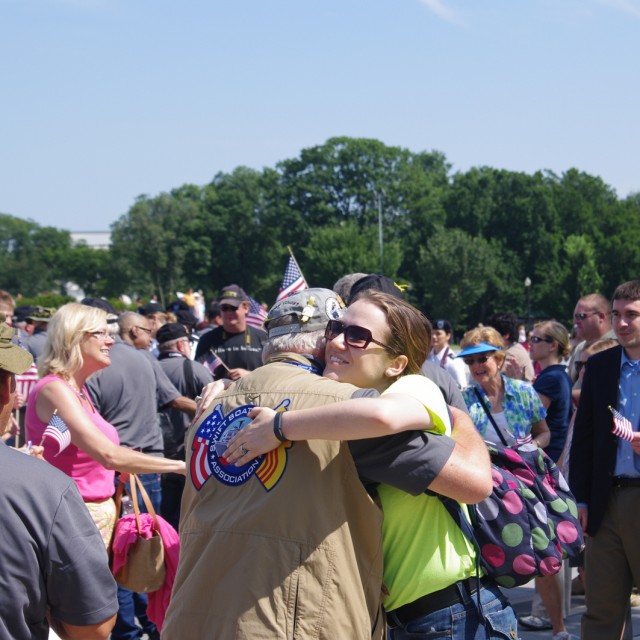 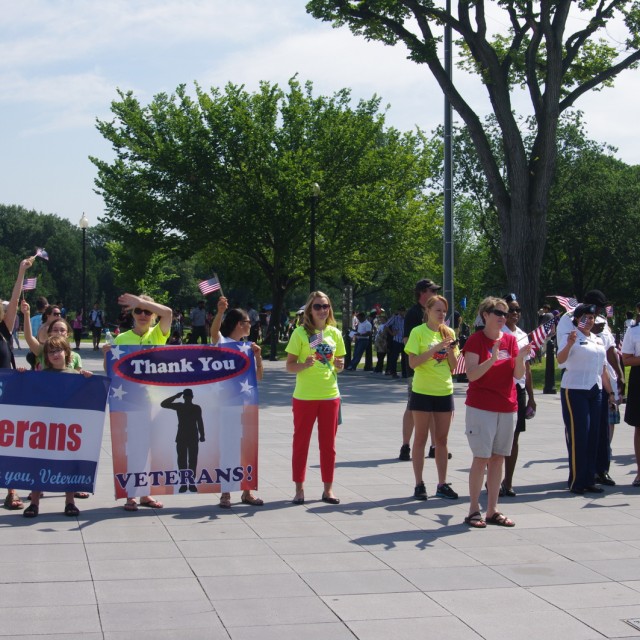 Being greeted at the Lincoln Memorial.

At the Lincoln Memorial, we were treated to even more greetings and love as the vets made their way to the steps for a quick photo before heading over to the ’œWall’ to reflect.  Nurses from the Walter Reed Army Medical Center were on hand to support the men.

Each veteran experienced the wall in their own way. While it was a time of closure for some, others found it tough to even look at.  Most were happy to share, and it truly was an amazing experience to soak in. 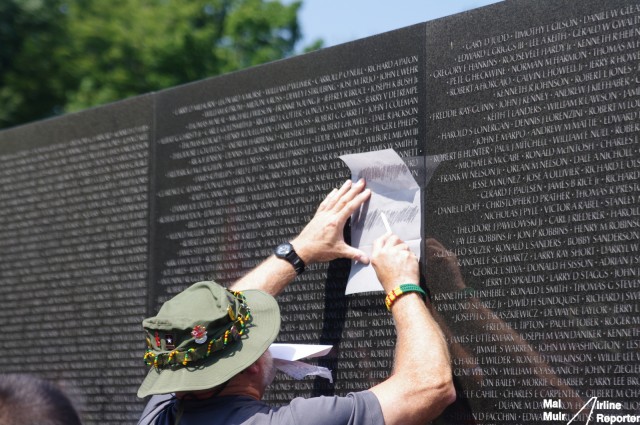 A veteran takes a tracing of the names on the Vietnam Veterans Memorial – Photo: Mal Muir | AirlineReporter.com

We left the memorial and headed to the Smithsonian’s National Museum of American History for lunch in the aptly-named Stars and Stripes Cafe. We then had a quick visit to the Price of Freedom exhibit, which looks at the costs of war throughout the history of American conflicts.

One part of the exhibit was the “Huey 091,” which has special meaning to American Airlines. The helicopter was delivered to the museum by Jim Palmersheim, a current AA Captain. He flew the restored helicopter across the country, stopping at schools along the way to educate students on the war.  When the Smithsonian learned about it, they offered to display the helicopter at the end of the journey.  It was delivered directly to the lawn of the US Capitol, and then placed in prime position in the exhibit. 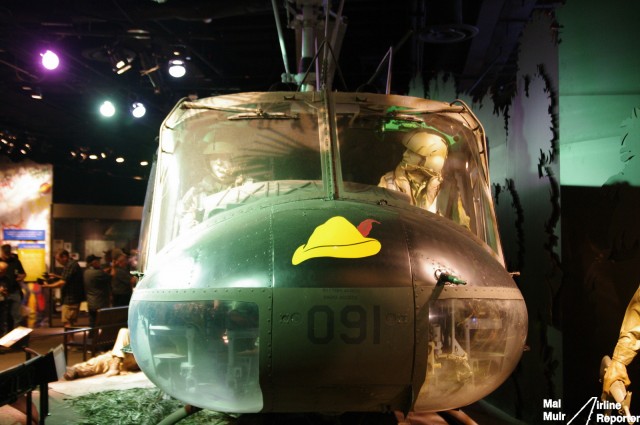 Huey 091, donated to the museum by a former pilot of American Airlines – Photo: Mal Muir | AirlineReporter.com

After leaving the museum, we headed to our final destination; Arlington National Cemetery.  It was a challenge to be in the presence of so many who made the ultimate sacrifice in service of their country.

We also had the opportunity to witness the Changing of the Guard at the Tomb of the Unknown Soldier.  The silence and respect given to this special ceremony was impressive. After also visiting the grave of Audie Murphy (the most decorated soldier of the second World War) we were back on the bus to DCA. 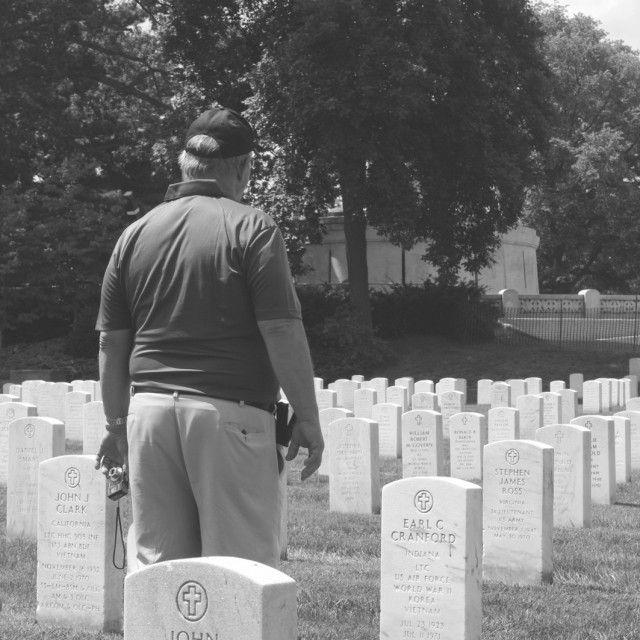 A veteran takes a moment to survey the sacrifices made by so many. 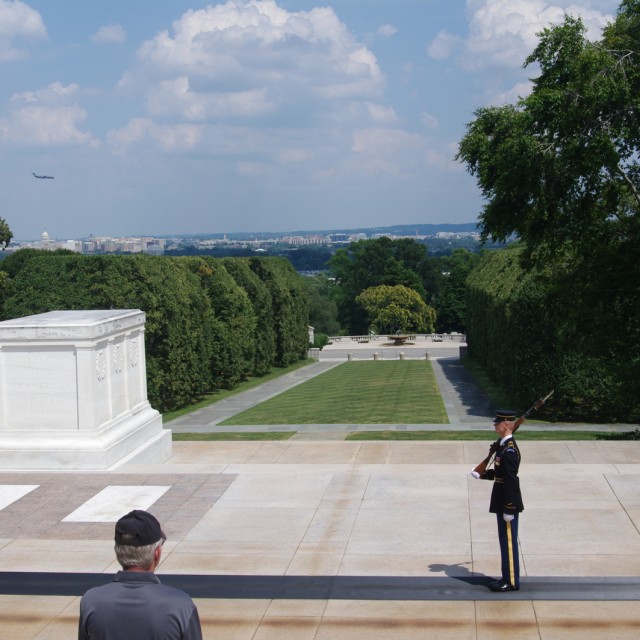 An Honor Flight veteran watches as the Honor Guard stands watch over the Tomb of the Unknown Soldier, while an AA MD88 lands in the background.

In the military they say ’œrank has its privileges,’ and for the veterans on the Honor Flight, it was still true.  We sped through the TSA checkpoints, as other passengers looked on in envy (even those in the priority line). This special treatment was offered because the head of the TSA has instituted a policy that all Honor Flight veterans would not have to go through the standard TSA security procedure.

As we climbed out of DCA and headed home we had a different crew on board, but they were still all veterans themselves or related to them. After a dinner service, there were many photos and speeches given to thank those who had organized and arranged this special day.  Also, there were still a few more surprises for the veterans.

The old tradition of doing a “mail call” had been revived, this time no veteran would be left out. Each of them was handed a package that had been secretly stashed on-board.  The packages were filled with letters, cards, and gifts from friends and family that sent them in without the knowledge of the vet.  Luckily, tissues were on hand as tears flowed – plenty more hugs were offered. 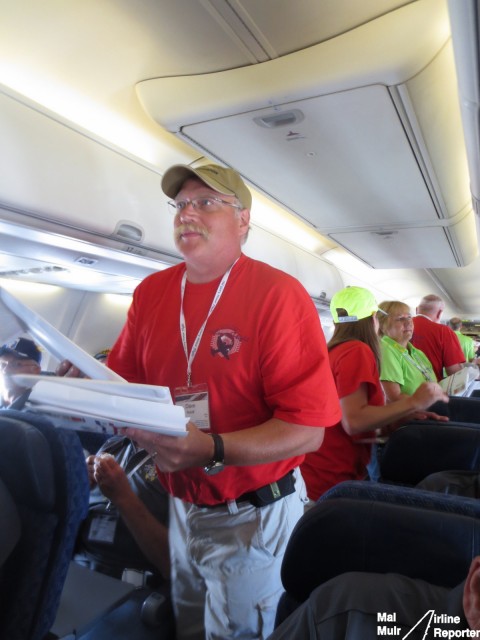 We landed at Oshkosh in the middle of an airshow and, given a precise ’œtime on target’ of 5:32 pm, we made it with military precision.  The pilots taxied the aircraft right into the middle of Phillips Plaza at AirVenture, and the crowds all paid tribute to the veterans as they disembarked.

The airshow continued with a battle reenactment playing out in the background.  As simulated explosions and gunfire erupted, the sun was setting in the west. While the veterans all stepped off the aircraft into the crowds of guests, friends, & family, the day was not quite over yet.

Gary Sinise, who played Lt. Dan in Forrest Gump, was putting on a special concert with his Lt. Dan Band, to help support veterans’ charities and, of course, provide some entertainment. 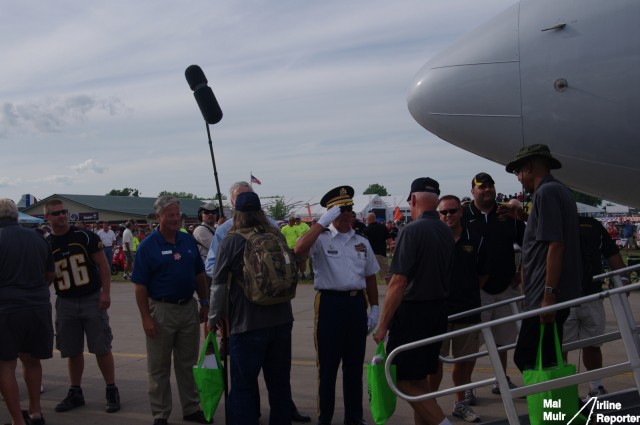 Greetings by local officials & the head of the EAA – Photo: Mal Muir | AirlineReporter.com

Virgil Jeardoe, my seatmate for the flights and a veteran from Kansas, summed up his experiences on the day quite nicely. ’œIt brought out the feeling that people wanted us,” Jeardoe told me. “It is what we should have received when we got back from Vietnam. Everyone today was so sincere.’

This was an amazing experience for me to see the love, sincerity, and appreciation – not only from the public who greeted us at every point, but also from the veterans themselves. 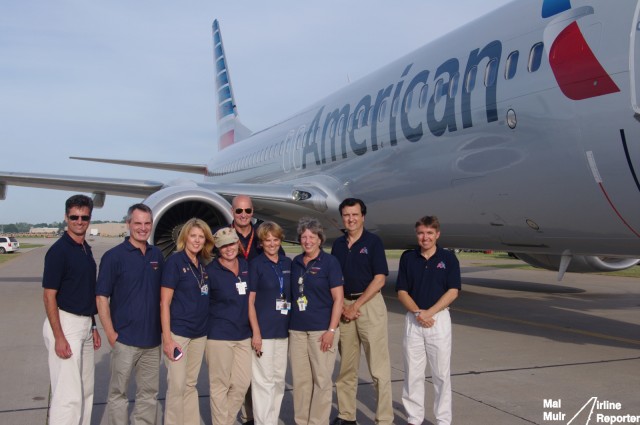 The crew of our American Airlines Honor Flight, in front of the aircraft at Oshkosh – Photo: Mal Muir | AirlineReporter.com

Although I am an Australian, I still very much appreciate what all the veterans (in the US and other countries) have done to help change the world. As a grandson and son of veterans, I am sincerely grateful that I was given the opportunity to go along with this group.

It is great when companies, organizations, and people can come together to celebrate and honor veterans.

*** Bonus *** Watch the Honor Flight Video on Youtube – With thanks to Chris Hibbens from Snap 180 Media, who filmed the days adventures.

Chris, thank you so much! Wasn’t sure if it was going to make it online, but since it did, will definitely get it out there.

I found the Honor Flight trip to be a very humbling experience. I am grateful to all who had a part in making this flight happen.

Bob… We thank YOU for your service. I am glad I could share the day with everyone so they to could see what sort of things are done so that others can get their time at the wall.

Very nice article Malcolm and thanks for writing it.
Nice to have met you.
Best of luck Mate
Semper Fi
Captain Matt Stork Jaeger

You could certainly see your skills in the article you write.
The sector hopes for more passionate writers like you who aren’t afraid to say how
they believe. At all times follow your heart.

Some people may call it spam but we call them backlinks. Google actually rewards your site or blog by upping your search engine position because of the traffic your site attracts. So what is a backlink? Backlink” is a term that refers to links that point to a website or webpage from another website. This type of link also might be called an inlink or incoming link. Backlinks on other sites can increase a website’s traffic. They also are tools used in search engine optimization (SEO), because the number and quality of backlinks that point to a website’s often plays a role in the site’s rank among search results. So don”t delete them get involve and feel free to post one on my site