Somehow, AirlineReporter.com missed the opening of your new terminal in October, 2011. We must have been busy with the 787, A380, airline mergers and stuff like that. But we still want to talk about you.

And by the way, we do know that your full name is ’œWinnipeg James Armstrong Richardson International Airport’, but frankly, that’s a lot to type over and over. So we’ll just call you YWG. Hope you’re OK with that.

OK, everyone, let’s review what we know about YWG and Winnipeg, the capital city of the province of Manitoba, Canada. 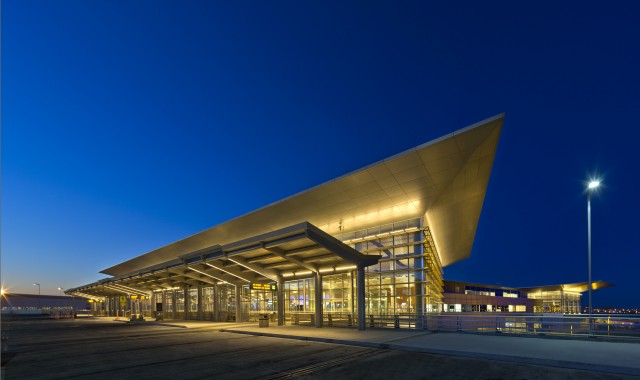 Fast Facts ’“ Winnipeg is pretty well at the geographical centre of North America, on the eastern edge of the Canadian Prairie. It has a diverse population of about 750,000 ’œFriendly Manitobans’.  Wonderful people, great restaurants, sports and culture.

Winter ’“ Cold. Really Cold. Really, really cold.  So cold that YWG offers passengers ’œbattery booster packs’ for their cold-soaked parked cars that won’t start.  So cold that GE Aviation Engines built an outdoor cold-weather testing facility at YWG, operated by Standard Aero.  Looks like it could be part of the Rebel defenses on the ice-planet Hoth.

Summer ’“ Hot and humid, with those monster prairie thunderstorms.  So hot and humid that GE expanded their facility to do engine tests year-round.  And we mustn’t forget the mosquitoes.  I have experience with them ’“ they’re the size of a Cessna 172.

Random Facts ’“ Winnipeg was the first city in the world to develop the 911 emergency phone number.  Home to the classic 1960s-70s rock band, ’œThe Guess Who’.  Winnipeg is the 7-11 Slurpee capital of the world.  Really!  Home to the largest urban mature elm tree forest in North America, over 170,000 trees. 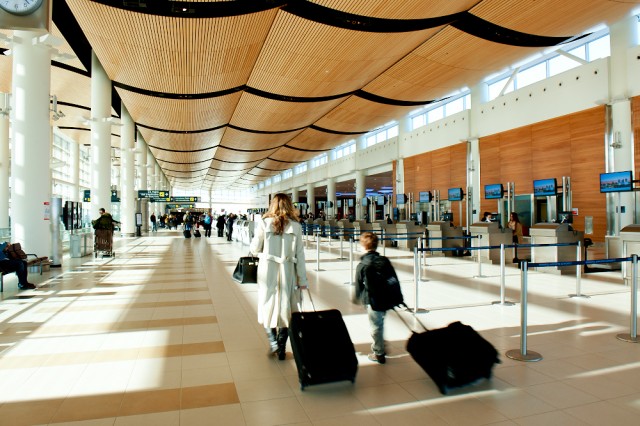 Aviation ’“ Among other aviation-related businesses, YWG is the home of Boeing Canada, GE Aviation Engines, Standard Aero, EIC, Bristol-Magellan Aerospace,  and the Western Canada Aviation Museum (WCAM).  WCAM has a GREAT collection, including a 1960’s vintage Air Canada Vickers Viscount.  You can sit inside the Viscount, and pretend you’re a kid flying between YYZ and YUL in 1967.  Like me.  And the Royal Canadian Air Force (RCAF) 17 Wing is based at YWG.  If you fly small planes, Lyncrest Airport’s manicured grass runways are to the south-east of the city, and tower-controlled  St. Andrews Airport is to the north.

Old YWG Terminal ’“ Used to be a 1960’s vintage, 9 gate building.  Crowded, renovated over the years, not particularly efficient.  It was due…

New YWG Terminal ’“ YWG’s beautiful new terminal opened on October 30th, 2011, and the old one closed on the same day.  The new 51,000 square meter (550,000 sq ft) terminal has 11 “contact” gates, with an additional 7 ground-loading gates.  There’s over 10,000 square meters (over 100,000 sq ft) of huge glass windows, and a ’œconstellation’ of 55 skylights.  The amount of natural light and open space in the terminal is a major improvement over the old building.  The terminal saw over 3.5 million passengers in 2012, and it’s designed for 4.1 million passengers per year.  There’s lots of room for expansion, too.

For passengers, check-in is easy with 32 common-use self-service kiosks, which can print both boarding passes and baggage tags.  So it doesn’t matter which airline you’re flying, use any kiosk.  Speaking of scheduled airlines, YWG is served by Canadian majors Air Canada and Westjet. Regional airlines include Bearskin Airlines, Calm Air, First Air, Air Canada Express, Delta Connection and United Express.  Did I forget anyone?  Regionals Perimeter Air and Kivalliq Air operate out of their own terminals, a kilometer or so south of the main terminal.  YWG is also served by a number of charter and cargo carriers.  And if you really don’t want to fly, the new Winnipeg Bus Terminal is right next door to YWG’s new terminal. 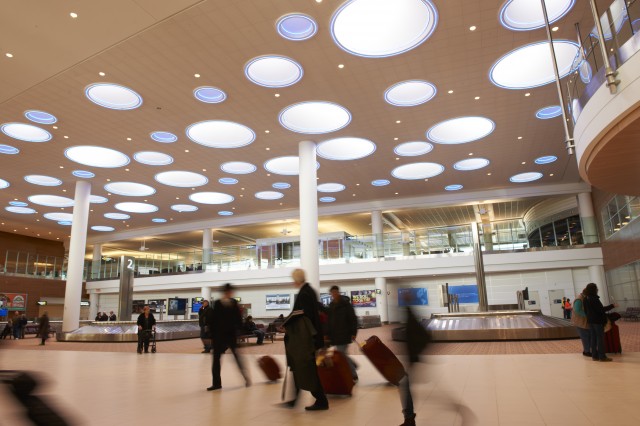 YWG has been recognized for its terminal design and operation with some impressive accolades – it was named one of the World’s Most Stylish Airports by The Telegraph in the UK; made Travel & Leisure’s list of Coolest New Airport Terminals; and was included in The Travel Channel’s World’s Most Iconic Airports list.

The new terminal is totally green ’“ it’s a ’œCertified’ LEED facility (Leadership in Energy & Environmental Design), by minimizing the use of energy and reducing greenhouse gases . It’s also been built using Universal Design principles, to allow access and convenience to people of all abilities.  The terminal was designed by Pelli Clarke Pelli Architects and Stantec, to ’œconnect to the unique exterior landscape, drawing attention to the prairie and the large expanse of sky that characterize this Manitoba region.’  I guess that’s ’œarchitect-speak’ for ’œIt’s really flat out there, and we’ve designed a gorgeous building to fit in!’

I recently saw a great tweet from a passenger at YWG: ’œWinnipeg: where six security guards bless you in unison when you sneeze at the airport.’  I’m thinking that the people working at “Winnipeg James Armstrong Richardson International Airport” really enjoy themselves and their new terminal.

Have you flown through YWG?  What do you think?  Leave a comment…!

I wasn’t all that taken with our new airport until I read your profile and understood a lot more about its design and function. I’m going to look at it very differently next time I travel.

Thank you for covering the opening of the new terminal, better late than never we say! And we recognize that although we are technically, Winnipeg James Armstrong Richardson International Airport”….YWG is the airport reference code…and much easier on the word count.

The airport campus has been abuzz with construction activity for the past few years and for those visiting us soon, you will note that the new Winnipeg Grand Hotel is opening this Fall and that ground broke on the new Courtyard by Marriott.

Oh and if you are craving a slurpee…there is a 7-11 on the campus. The team there is really friendly and you can also gas up and earn Petro points.

Yes we do really like working at our new terminal, but what we really love is when people come visit us…so Howard, book a trip and visit YWG soon.

Thanks, Christine, for the update to the story. But now that Keleckis’ has closed, I’ve got one less reason to come to Winnipeg – just kidding! I’m overdue for a visit, and I’ll be sure to look you up when I’m there.

Just desire to say your article is as surprising.
The clarity in your post is just great and that i could think you
are a professional in this subject. Well together with your permission allow me to clutch your feed to
stay updated with forthcoming post. Thanks 1,000,000 and please keep up
the rewarding work.