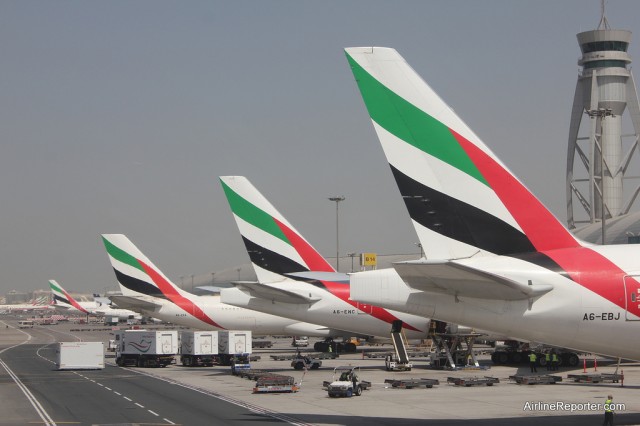 Line of Emirate’s tails in Dubai.

Recently, I had the ability to ask Patrick Brannelly, Emirates Airline Vice President – Corporate Communications, Product, Publishing, Digital & Events, some questions about Wi-Fi and the future of entertainment on the airline. Here is our discussion:

AirlineReporter.com (AR) How many Emirates aircraft currently have Wi-Fi available?
Patrick Brannelly (PB): The whole A380 fleet (currently 21 aircraft) has Wi-Fi. We’ll be getting another 10 A380s before the end of 2012 and they’ll all have Wi-Fi as well. We’ll also be introducing the ability to use your own mobile phone next month on our A380s ’“ a service that we already have on over 90 of our other aircraft (we launched that service in 2008).

AR: What is the schedule for the entire fleet to be fitted?
PB: Going forward, all A380s will have the service and we aim to start fitting the rest of the fleet with internet before the year end. It will take some time to equip the entire fleet but we are working on accomplishing this as quickly as possible.

AR: Are new Airbus/Boeing aircraft equipped with the Wi-Fi?
PB: Yes for our A380s and we hope to have our Boeing 777s equipped from mid-2013.

Why did Emirates choose OnAir?
OnAir was the only option offered by Airbus for equipping the A380 fleet straight out of the factory ’“ they have provided a good service and we are happy with them.

Emirates plans to install Wi-Fi to their 777 fleet in the future.

AR: Currently, Wi-Fi pricing is set up based on the amount of data used and how do passengers patrol/control the amount of data used?
PB: Customers buy a package of data, either 5MB or 30MB for mobile or 30MB/100MB for laptops. They can see their current usage and decide whether to buy extra MB or cut off at the limit.

AR: A recent APEX story shows the record being at 680MB, has that been broken yet?
PB: It’s still a record ’“ 680.51MB was used on our New York flight on Valentine’s Day. Someone in love perhaps!

AR: What is the current pricing structure?
PB: We may tweak this pricing in time, but currently users can connect a mobile from as little as $2.75 for 5MB of data. This is more data than most will need to connect socially throughout even a long flight. We also have a heavy (30MB) mobile package available for $15 but few opt for it. Laptops can connect from as little as $5, and there is a heavy user package for $15 for 100MB. These prices are low for satellite connectivity, but we see this as a service to our customers rather than a profit centre (in fact we lose money).

AR: What are the usage statistics? Is there growth?
PB: Yes ’“ we are still seeing growth. This is probably because awareness is still growing about the service and because increasing numbers of people are carrying on devices that can connect. We see over 4% of passengers connect on the very long flights of over 12 hours (such as New York / Sydney etc.) but much less on flights under 5 hours (less than 1.5%). 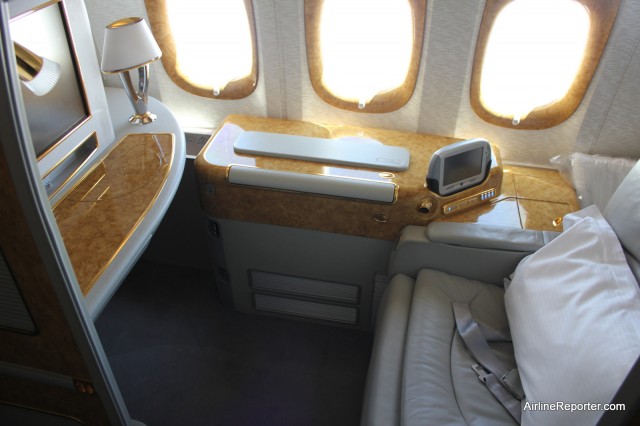 Emirates already offers a pretty slick product. Adding Wi-Fi will only make it better. This is First Class seen on a Boeing 777.

AR: Are there any plans to offer on-board Wi-Fi entertainment options (where passengers can access Emirates entertainment from their personal devices via Wi-Fi)?
PB: We are looking at all options ’“ but with over 1,300 channels of the latest and greatest entertainment available on your large screen personal TV for every Emirates customer, the need to play media on your own device is reduced.

AR: Will passengers be able to access the internet through ice (the name for the entertainment system)?
PB: We hope so but not at the moment. There are some technical issues, largely to do with the seatback’s light-browser’s capability to connect to the internet for a good experience. You really need a mouse and a keyboard at the moment and that’s not practical. However, we are working on it.

AR: Are there dark spots where passengers will not be able to have internet?
PB: The OnAir service uses Inmarsat’s geo-stationary I4 satellites which cover the entire globe except for the extreme poles (above about 80 degrees). There are also a few countries that are yet to provide approval to use the service in their airspace, so we have to block it… but these are reducing.

AR: What digital “wonders” from Emirates can passengers expect for the future?
PB: Emirates has led technology in the air for 20 years or more. From being the first airline to install TVs on every seat on the entire fleet in 1992 to today, when we’ve introduced services such as mobile phones and internet inflight, as well as large HD capacitive touch screens onboard our latest 777s. Rest assured we have a lot more innovation coming, but we tend to talk about it when it’s ready to launch rather than before’¦