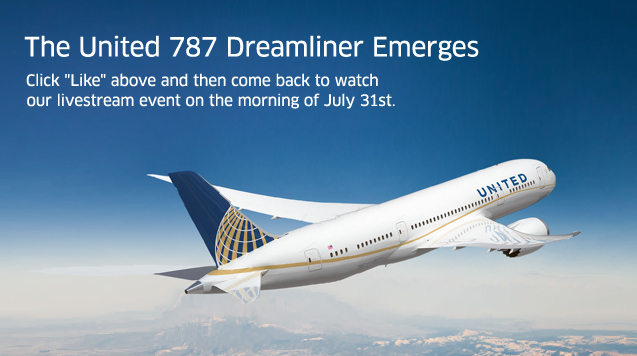 Join in on the fun on Tues and then again on Thurs mornings. Image from United.

Tomorrow morning at 5:00am PT (yes, hecka early), United’s first Boeing 787 Dreamliner will come out of the paint hangar, with its special livery. For those of you who will be awake at that time (it is still iffy if I will make it up that early), you can follow along with a live feed being provided by United Airlines.

On Thursday, media will be invited to check out the new interior of United’s Dreamliner and be sure to follow along on my Twitter and Facebook.

If the photo (From United)in today’s post is a fair representation of their ‘special’ livery for the first 787, mark me down as a LIKE for the design. Simple, clean and yet bold, it sings to my eyes. New 787 rolling around or not, you can bet that I will NOT be sharing the joy at 0500.