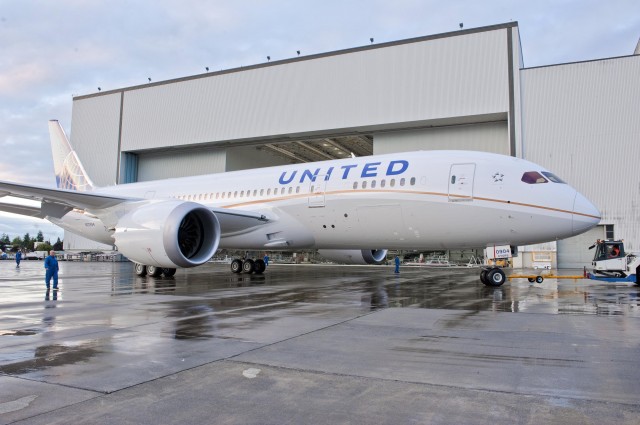 At 5:00am this morning, United Airlines rolled out their first Boeing 787 Dreamliner from the paint hangar at Paine Field. It was a bit too early for this Airline Reporter, so I have had to take a look at photos, like everyone else.

The video of this morning’s event, should be available on Thursday. That should also be the day, I will get the opportunity to check out the interior of this beautiful plane and see it first-hand. I know many of you have been critical of the “new” United livery, but this looks dang good. 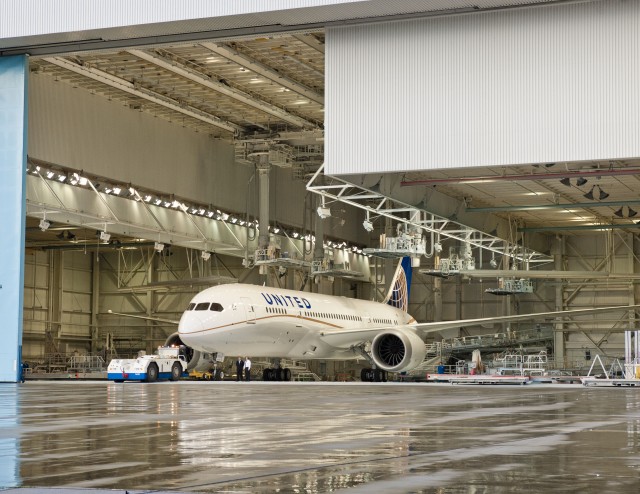 The interior cabin will use blues and grays, which are consistent with the airline’s newer aircraft today. The 787 will also debut a new in-flight entertainment system that according to United will offer, ’œmore intuitive browsing and more filtering options.’

To start preparations for the first 787 delivery, United has already installed a full-flight simulator at their Houston hub and has started training pilots,  flight attendants and mechanics. 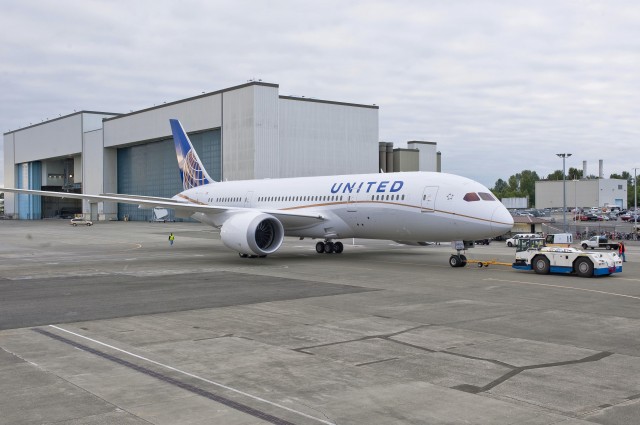 Stay tuned for Thursday, August 2nd. Starting at about 10am PT, United will be giving a tour of the interior of their 787 Dreamliner at Paine Field to invited guests and media. You better believe I am more than excited to be going. Be sure to follow along on my Twitter and Facebook.

MORE PHOTOS OF UNITED’S BOEING 787 PAINT HANGAR ROLL OUT:
* Jon Ostrower got some screen shots of the live video feed this morning
* Local ABC Station, KOMO4, has posted photos taken from their helicopter this morning of United’s 787

And that is part of the purpose 🙂

I dont know im kind of skeptical that will coax sales.

maybe, but ANA’s big ‘787’ livery makes this one seem rather muted.

Cant wait to see one of these flying at Dulles. What will the registration be? N787UA?

I would like to have seen a bigger “787” plastered on the side….but its not bad.

Me too. I understand why they wanted to keep their “new” brand as intact as possible, but a “787” somewhere (like ANA) would have been nice.

Looking forward to your interior pics.

Too bad that N787UA was already assigned. It also seems strange to see a tail number that doesn’t end with 2 letters.

sorry if i missed this info, but what routes will see this plane first????

Without the gold cheatline, the plane would be rather, well, just a plain white airplane with a blue vertical stabilizer!

DEN-NRT won’t be the first international one, just the first announced one. No way they will be flying a plane on domestic runs for more than five months before flying it on real routes. It’s almost swappable with the low load factor GE 777 flights without any major seat assignment changes.

Before placing their new 787 into commercial service I believe they intend to fly it around the USA to the various Hubs (SFO,ORD,LAX,DEN,IAH,etc.) to show it off to the various commercial customers and high level flyers. So stay tuned.

No wonder that this plane is one of the nicest planes in the world. The smoothest, the fastest, the quietest and the longest range jetliner ever built. Vietnam Airlines and Korean Air are waiting to receive their first Boeing 787s.

You really love this airplane, huh? I also love this awesome Boeing 787 aircraft, too!

Yup, just because its a beautiful aircraft that I love it so much and this is a United Airlines Boeing 787.

That’s true! This is a United Airlines Boeing 787. I agree with you!