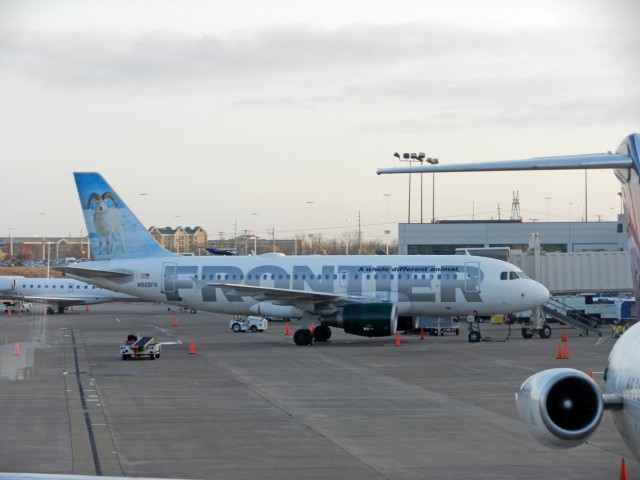 An Airbus 319 in Nashville giving new meaning to the term ’œRam Jet’. Photo by Andrew Vane.

This week’s airline livery comes from Drew Vane. Here is his story in his own words:

If ever there was an airline livery for animal lovers, it’s Frontier Airlines.  If you’ve happened to fly anyplace west of the Mississippi, chances are you’ve seen the wildlife friendly tails.

Every since Frontier Airlines announced the “new” re-branded name after merging with Midwest, the airline has continued to wow passengers with their tails, even if the animals painted on them don’t always have them.  Not only are these aircraft beautiful works of art, they’re also all unique to each individual aircraft.  Be it a regional jet or turboprop flying under Frontier Express or an Airbus A320 series for the main airline, Frontier has as many liveries as it does aircraft.  I suppose you could say its got more liveries than any other airline.  They even recently had a voting option for the next tail animal with Polly the Parrot pulling in 39% of the vote.

As a wholly owned subsidiary of Indianapolis based Republic Airways Holdings, Frontier Airlines has rapidly grown in its 18 year history to reach 80 destinations from its hubs in Denver, Milwaukee and Kansas City.

I haven’t had the privilege of flying on Frontier but I did catch a glimpse of some of their fleet in Nashville last month.  Airline Reporter featured both the Fox  and Bald Eagle in past stories.  I think they should do away with the traditional N registration numbers mandated by the FAA and register their aircraft with the mascot’s name.  I can just hear the pilots on the radio: ’œFrontier Polly want an approach cracker.’

How many animals have you flown on and what are your thoughts on this livery?

https://www.airlinereporter.com
BLOG LITE: On the road to Portland and Dubai + Lufthansa 747-8I Rumors
Airline Love: No ID and Trying to Fly? JetBlue Goes Above and Beyond
5 Comments

A friend and her boyfriend traveled to Florida to witness one of the final Space Shuttle launches and flew aboard a Frontier A320 with a Mountain Lion livery. Having worked with them as an animal trainer, she wanted to take a photo with the Mountain Lion graphic in the cabin so they waited until the other passengers had exited and got her pictures. The cabin crew struck up a conversation and they were then invited to check out the cockpit and got some photos there too! Think this would have been ALMOST as exciting as watching a shuttle launch!

Great story — thanks for sharing!

I fly on F9 pretty frequently. They’ve always had very friendly crew and never turned down a request for a cockpit visit. A highlight was flying on a E190, visiting the cockpit, and finding out from the PIC that the bird only had 48 hours on her 🙂

Oh my goodness! Impressive article dude! Many thanks, However I am going through issues with your RSS.
I don’t understand the reason why I can’t join it.
Is there anybody else having the same RSS problems?
Anyone who knows the solution will you kindly respond?

Here is my webpage :: santa decor

Hi there colleagues, its great piece of writing concerning teachingand completely
explained, keep it up all the time.