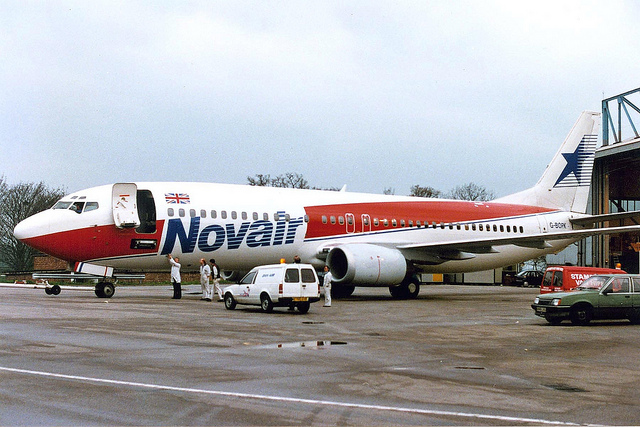 AirlineReporter.com reader and airline enthusiast Ken Fielding , who has already brought us great photos of a Boeing 767 with its door open and a Lockheed Constellation that tipped over, now shares a story and a series of photos of a Novair brand spanking new Boeing 737-400 that had some issues trying to get into a hangar in Manchester. Here are his photos and story in his own words:

When Novair took delivery of their two -400’s in spring 1989, they contracted out the line and base maintenance to Dan-Air Engineering in Manchester (MAN). Unfortunately the Dan-Air hangar at Manchester wasn’t quite high enough to accommodate the taller tail on the B737-400… so what did they do? The next few photo’s show how they did it… 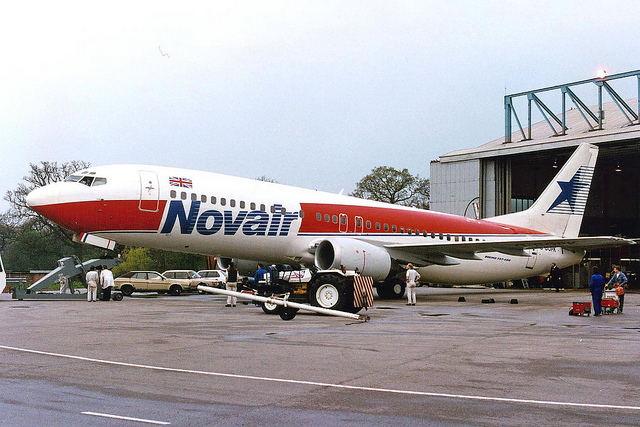 They designed a hydraulic tow bar which could lift the nose of the aircraft and therefore lower the tail enough to be able to get it through the hangar doors. 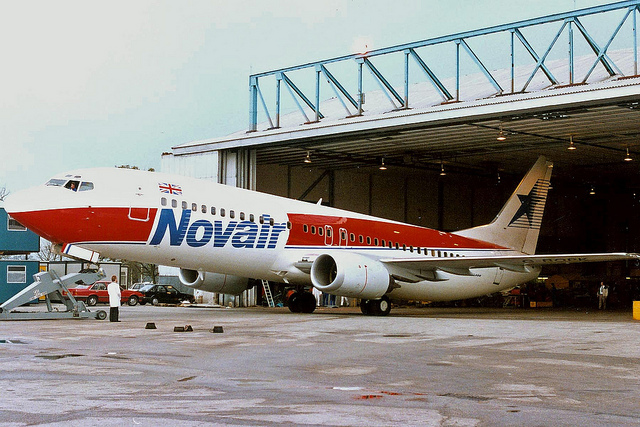 It required a delicate balancing act to ensure that the tail didn’t hit the ground, then push it gently backwards. It was the first time this had been tried on a ‘live’ aircraft so everyone held their breath as it continued to move slowly backwards. 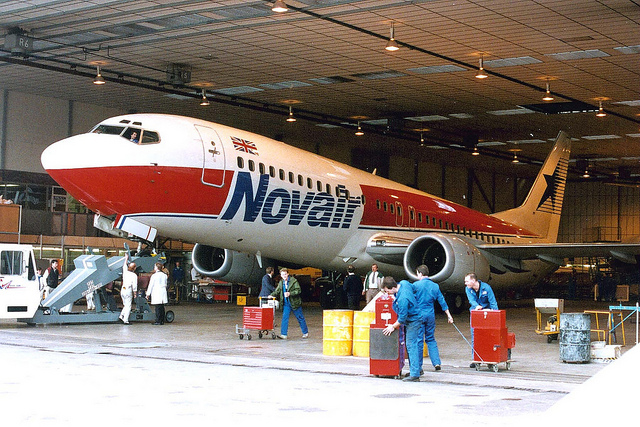 Almost in position. They had even remembered to cut a hole in the hangar ceiling to accommodate the top of the tail when they let the nose down again. 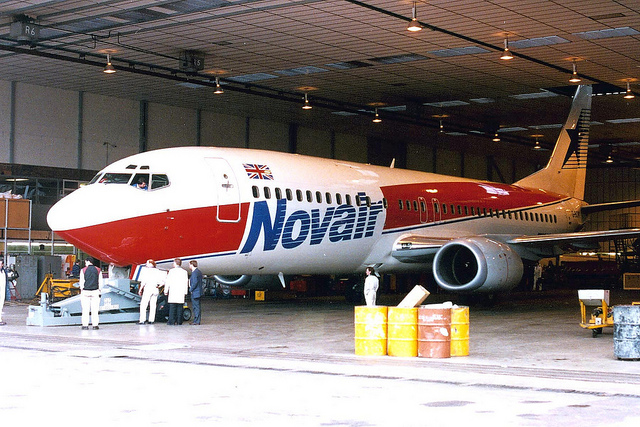 And there we are, in position at last! It all happened in reverse to get it out again.

Convair used to tip the B-36 in a similar fashion to get it out of the factory hangar. Google can find a few pictures of this.

I’ve seen pictures of AA doing this with a 757 at KBOS too. But perhaps this has been done earlier than AA did that?

A United 747 did an unscheduled/unwanted wheelie in like 2005, not as graceful as this though.

Yup, I saw the 747 in SFO on its tail. Big mistake by a maintenance guy not putting the ground pins in the aft main gear. Very expensive.

I did wonder if it had been done somewhere before but it was the first time I’d seen it done. I was impressed!

That has got to be a small hangar not to hold an E175?

The hangar also held a Do 328. Just a low doorway, the static wicks on the tail would have been clipped off if they didn’t raise the nose.

We used to that back in the 70s

Never underestimate human ingenuity. You have to love great minds at work.

A scream! and Creative thinking at its best. I’d love to see pix of the United 747 that did an untended nose-up. Last, let’s remember that a nose-wheel aircraft have a delicate balance and unintended tails down, especially with rear-engined planes like the MD series, DC-10 and MD-11 etc., are not as rare as one might expect. Ever wonder about those huge concrete blocks that hang from the wings of the incomplete 787 fleet? Guess what? It is to keep them from dragging the behinds before the engines are available. Amusing post.

I recall a video clip a few years back about assembly of the A320 (may have been an A321). I think they do the same thing for every ac to either get it out of the factory door or into the paint hangar (don’t remember which).

It was an Air New Zealand A-320 after painting there special Crazy About Rugby Livery.

A big shoe horn. Just hope they remember to reverse the process on the way out?!?! Why not just put a big fuselage sized notch in the hangar doors and leave the tail hanging outside?

This looks to be a whole lot less expensive than alterations to the hanger and it allows it to be secured and returned to it’s original purpose if this is a temporary or occasional use.

The Glanford hangar at CYHM has exactly the hangar door cutout that you proposed, complete with built-in drapes that hug the fuselage to keep the weather out. Westjet used the Glanford hangar in order to perform maintenance on Boeing 737-200’s before they built their own maintenance facility, and seeing the tail sticking through the door was a common sight at the time.

All those millions spent on planes and contracts and they cannot modify a simple roof system to accommodate the tail in the middle of the ceiling.

NOT TO BELITTLE A POINT BUT ARCHAMEDES (SPELLING IS OFF BUT YOU KNOW WHO I MEAN) ONCE SAID,,, GIVE ME A LEVER AND A POINT AND I CAN MOVE THE EARTH. NUFF SAID!

Boring.
We do that everyday with our NG’s in YYC.

I used to fly a Falcon 900 for a real peach of company that used to use this principle to get into a small hangar. I wonder how much the insurance premiums would increase if they were aware of this type of operation.

Insurance for the building or the aircraft? 🙂

OMG. That is gold! Thanks for finding that.

I am curious as to the reason that the guy who seems to be in charge is rockin’ a “doctor coat.” even doctors rarely wear these anymore. What’s the deal with this dude? Maybe he’s a nose surgeon.

He was the hangar foreman. Presumably he never got dirty enough to need a full set of coveralls

Earlier than B-36s. All of the B-29s built in Omaha were built in a plant that was designed for B-26s. They all had to come through the delivery door with a tow stand that tipped the nose up.

If you hadn’t said it I would have. I read an article about the 29 manufacturing hanger facility that was recently closed and scheduled for demolition. I think it said it was leaking badly and someone was parking an old B17 in it that had to be relocated:
‘Mother is the necessity of invention’

A Good Pilot is
Always Learning

We did this with our P-3A’s in the early 70’s at Patuxent River hangar 101. Our tails had to fit up into the rafters so we had spots painted on the floor to position the wheels exactly. In the event of fire we were told ” Just drag it out” we can fix the tail!!! Never happened.

When you absolutely, positively gotta fix it now.

Mother is the necessity of invention.

Sorry people, but circa 1956, British Aircraft Overhaul company at Cambridge UK. Used this system to move Royal Air Force Vulcan Bombers through the hangar entrance.
East African Aiways at Nairobi in late 1960s modified the hangar entrance mantle and still had to juggle carefully it’s VC10 fleet for the same reason. I know because I worked in both places,

When I went to work for Delta Air Lines, in September, 1951, in Atlanta we used to pump up the nose strut of a DC-4, put a collar on the strut to prevent it collasping, lowered the main gear struts, and have about twenty men sit on the horizontaol stabalizer, to move the DC-4 into our overhaul #1 hangar. The roof was later raised about five feet, while we worked on DC-3’s, ‘4’s, and 6’s. Not much new in this world.

We also had a low hangar in Miami, so a nose gear ramp was built into the floor from the outside ramp into the hangar so the nose and engines of DC-6’s and ‘7’s could get slightly into the hangar to protect from Miami Sun and Rain.

In reference to the above post of Delta operations in Miami. We had DC-4s that we did 100 hr inspections while on turn around. The nose and engines went into the hanger. Maintenance was performed out of the wx. This was 1950.

Didn’t the Lockheed Constellation avoid this problem by using three small tails instead of one really tall one?

And two mechanics were performing an engine run or taxi on a DC-6, started the 2 engine(s) without hydraulic pumps, taxied into the tail of a DC-7, with it’s nose gear down in that trench, ——-what a mess——–

Southern Airways used a similar device to get their Martin 404’s into their hangar in ATL back in the 1960’s.

I have to do the same every year when I put my C180J on floats into the hangar for the winter. But it is a lot simpler, I just have my wife pull on a rope on the tail.

Ha! That does sound much easier 🙂

This is nothing new! I have done this a lot with the old Martin 404’s. Why are people getting in an up roar over this!
Maybe I am just getting old, or the kids today have NO common sense!

When was the last Martin 404 flown? I think it was in the late 70’s? There are a lot of people who haven’t seen it. Plus there is something said about seeing a smaller prop aircraft being tipped up to get in a hangar vs a large one like the Boeing 737. I think if I have seen it done 100 times, I would still get a kick out of it!

Last 404 I saw fly was 1991, when I had to tip it to get it out of a hangar at KROW. The next year or two I saw a 727 sitting on it’s butt there because the ground crew did not lower the rear air stair, Oh, Yea they where not allowed to because the government said someone could jump out of it. It only happened once, but they messed up all of aviation! Real smart!

I don’t think I have a photo of it, but I will look. All 727’s empty have to have a tail support or they will sit down. You should have seen the cowboys roping the nose gear to get it back down. Almost as funny as the day we had to rope the tailwheel on an Airtractor that a new pilot parked on its nose! That was a cheap mistake, only about 70 grand!

I once saw an a/c that was about 10 inches too high to enter the hanger. The remedy was to let most of the air out of the tires and presto! it went in with no contact or damage.

Well…
It worked didn’t it? And they didn’t even need any duct tape LOL

Im curious as to what procedure is needed to be done inside; it didn’t look VERY cold there.

We’ve heard the HORROR STORIES of maintenance done ‘on the cheap’ outside the U.S., haven’t we…

This is an Approved procedure as per Boeing.

Meanwhile, in Prague, they cut a hole in hangar door and left the tails to stick out…