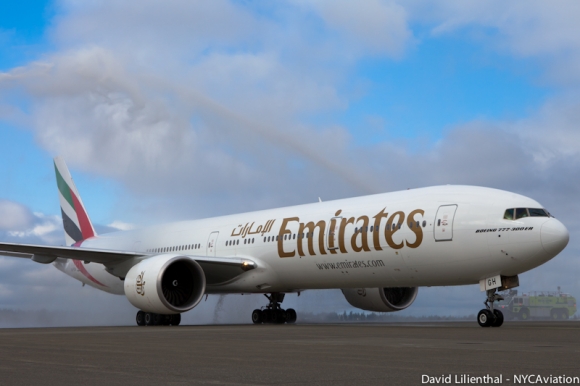 On March 1st,Â Emirates Airlines started operating their non-stop flight from Seattle (SEA) to Dubai (DBX) using a Boeing 777-300ER. The first flight was greeted with a water turret salute from the Port of Seattle Fire Department and by a nice fanfare inside the airport terminal.

“This new service will serve as a gateway to an important part of the world that is essential to create jobs, new business and tourism opportunities in our state,” said Gael Tarleton, Port of Seattle Commission President.Â  “This direct service connects the Puget Sound region to an entire new continent of economic possibilities.”

Even though this route has just started, Emirates is already planning to change out aircraft from the larger Boeing 777-300ER to the smaller 777-200LR starting on March 4th. “Like any airline, Emirates continuously reviews its aircraft schedule in order to ensure that our fleet is being deployed in the most efficient way possible,” an Emirates spokesperson explained to AirlineReporter.com. “In order to meet the strong demand for our Houston service, we are introducing our higher capacity BoeingÂ 777-300ER aircraft on to the route. This has necessitated an aircraft change for Seattle, and this service will be operated by a BoeingÂ 777-200LRÂ from 4 March.” This will provide 72 less seats, but the 200LR will offer the same customer product as the 300ER.

Does this mean that Seattle might not have the demand the airline was hoping for? Could be or it could be that Houston had more than they wereÂ expecting. “We have been very encouraged by the forward bookings for Seattle and we are confident that demand will continue to grow as the route becomes more established,â€ Emirates stated.

Not only is Emirates the world’s fastest growing international airline, but they also provide many jobs in the Seattle region, due to their large fleet of 777 aircraft. Today, Emirates will be taking delivery of the 1000th 777 made and more on that soon.

More on the SEA-DXB flight:Â
* Photos and more information on NYCAviation.com
* Video and story from Glenn Farley with KING5
* Photos of the 777-300ER (A6-EGH) landing by Jon Ostrower
* Screen shot of UAE230 on radar
* Story:Â Alaska Airlines and Emirates Announce Mileage Partnership

A friend will be on that flight in a month coming from South Asia. They actually wanted to fly to YVR but that turned out to be significantly more expensive.

Small correction, you have said “the same” twice

Thanks and fixed — David

I think the size reduction is likely due to DFW service. In order to create service to D/FW. Emirates cut one of their two daily roundripa between houston and Dubai. They moved that flight to Dallas. It would make sense that Houston has high demand, which now only being served with one frequency

Hey David Parker Brown,
On a similar note,, I’m sure many other people also get these when on Y!A. I have this advertisement from Emirates Airline constantly on the right side of my screen. It’s a video ad of some sort and each time I click to go to a different page it starts up all over again. Each time I have to put it on pause. I’ve had it now about 20 times and its driving me mad! How do I stop this thing from running each time I go to a new page? It’s eating up my bandwidth!
I look forward to your next post