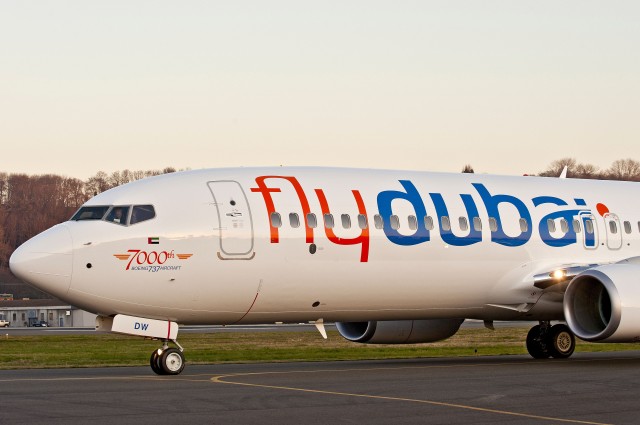 HI-RES PHOTO (click for larger). On December 16th, Boeing delivered their 7000th 737 to flydubai. The airplane is flydubai’s 14th Next-Generation 737-800 with the new Boeing Sky Interior. Photo by Boeing.

According to Boeing, there are 5,424 737s still flying today with 358 airlines in 114 countries. Knowing that the first 737 flew on April 9, 1967, that is AMAZING! So, who were the three that got the closest and are winning a free internet session with GoGo In-Flight Internet?

* Today’s 737s are 5 percent more fuel efficient than the first models delivered. By late-2012, the airplanes will be a full 7 percent more efficient, with full incorporation of the latest performance improvement package. The additional 2 percent equates to $120,000 savings per airplane per year, and tons fewer carbon emissions.

* The Next-Generation 737 is as long as it is wide, earning it the nickname of the first ’œsquare’ airplane.

David, the 737 could possibly pass the DC-3s all-time production record for a transport aircraft. I think over 10,000 “threes” were built, and given the 737’s longevity and popularity, that might be a possibility. Did Boeing give you a breakdown by variant of the ones still flying? (I was off by 114)

Kris, technically you are correct, but the total of 16,079 includes the 4,937 Li-2s produced in the Soviet Union and the 487 L2D2s built in Japan during World War II. Nothing similar relates to the 737. Take away those foreign “license-built” versions (most of which Douglas never received a royalty) and the DC-3 production stands at 10,655, which could be matched by the 737.

I see that over 1500 737s of the 7000 built are no longer flying.
The equivalent numbers of the A320 family for the end of November show that only 97 of the 4903 built were out of service.
(The 7000 airplanes that Airbus delivered by December included several other models – see the table at
http://www.airbus.com/presscentre/corporate-information/orders-deliveries/ )