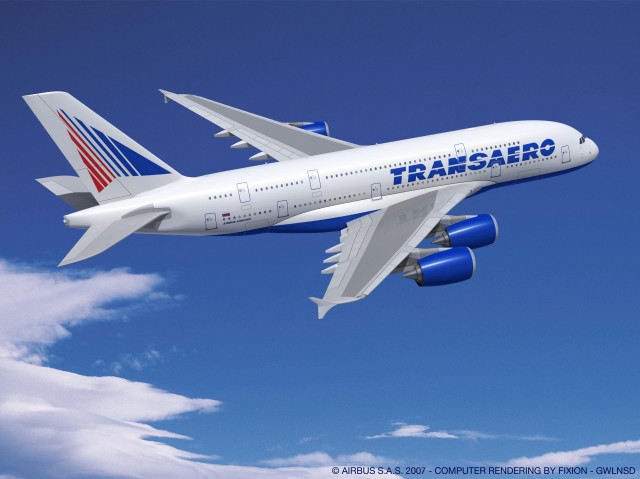 Computer rendering of what Transaero Airbus A380 will look like. Photo by Airbus.

Russia-based Transaero Airlines, signed a Memorandum of Understanding (MoU) for four Airbus A380s this week. The airline will become the first A380 operator in Russia.

Transaero plans to configure their A380 in a three-class layout, which will seat 700 passengers. With so many seats, I would imagine that first and business class will be quite small.

“Transaero is experienced in operating long-range wide-body aircraft, and is now ready to offer the A380. I am sure that the operation of this high capacity aircraft will stimulate the development of Russia’s aviation sector, in particular airports infrastructure while passengers will benefit from a completely new experience.’ said Olga Pleshakova, Transaero Airlines CEO.

The airline launched its services in November 1991, and currently serves more than 130 routes around the world. It is Russia’s second largest airline, behind Aeroflot, and has an fleet of aircraft consisting of the Boeing 737, 767, 747, 777 and the Tupolev 214.

The Airbus A380 currently has 236 orders from 18 customers and 59 aircraft have been delivered to seven customers to date.

That livery is terrible beyond words.

I would LOVE to see Aeroflot’s livery on an A380.

And I’ll agree on the livery, although it’s just as bad as all of Delta’s post-widget Eurowhite paint jobs…

Whoa… you don’t like Delta’s currently livery? I think it is a little conservative, but I do love the lines.