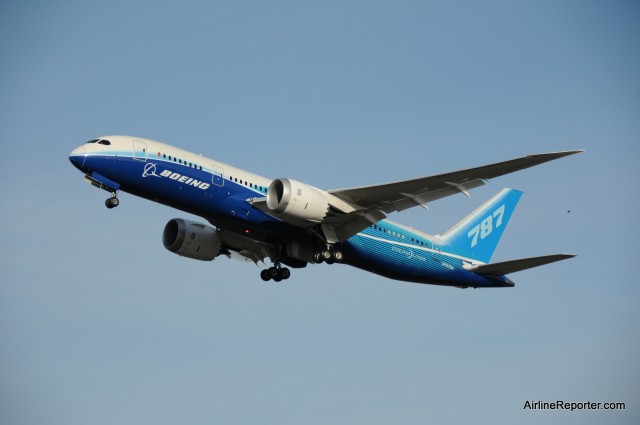 10 am to 5 pm: 787 Number One on view in the Museum parking lot. Free. Up-close viewing with Museum admission.Â Flight simulators in the Museumâ€™s Aviation Learning Center configured to fly like 787. Free with admission to the Museum.

1 pm: Dreamliner Family Workshop. Free with admission to the Museum.

1:30 pm: Lecture: Dreamliner Program Overview with Boeing Chief Pilot Randy Neville.Â A pilot who flew the plane on its historic first flight, Boeing Chief Pilot Randy Neville, will talk about the Dreamliner program during a 1:30 p.m. presentation at the Museum. Neville will provide an overview of the Dreamliner and its test flights. Since the maiden flight on Dec. 15, 2009, specially outfitted 787s have been actively flying in an extensive and demanding flight program to test the new technologies developed for Dreamliner. The 787 has since achieved FAA certification, and deliveries of new 787 airliners recently began on Sept. 26, 2011.

Unfortunately, there will not be access to the interior of ZA001, but it doesn’t really have an interior anyhow, so that is okay. To learn more, check out the Museum of Flight’s website.

https://www.airlinereporter.com
A Detailed Look at Air Indiaâ€™s History Part 2 â€“ Guest Blog
A Photo Can Capture the Spirit of Flight