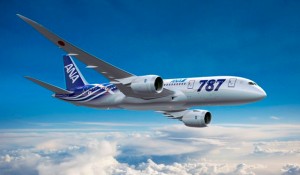 This is what the special livery will look like on the first 787 to be delivered to ANA (ZA101).

Boeing and ANA will be unveiling the special livery on the first Boeing 787 Dreamliner to be delivered, hopefully by the end of September. Boeing has stated the aircraft (ZA101 – Airplane #8) should be rolled out of the paint hangar located at Paine Field at about 3pm PT. You can follow the events live via Twitter (you do not need an account to follow – what is Twitter?):

I plan to do a quick post with a photo when it is reveled and then a post later this evening with many more photos, then a later post with a video tour of the interior of the ANA Boeing 787. Stay tuned…

Hey David I know you have a life and all but I have been waiting all evening patiently by my computer for the interior shots of the 787. Right now I am currently missing the birth of my child waiting for this (it’s the second so not as important but still…) get those pics up!