There is a lot of airline hatred out there and one thing I try to do on this blog is remind folks that even though things can and will go wrong in the airline business, it is still made up of wonderful people who should not suffer because too many people feel the need to share negative stories versus postive. When I wrote a story on giving the airlines some love, I got emails from quite a few people sharing their positive stories. Instead of just enjoying themself, I wanted to share. This story comes from Robert who lives in Ontario, Canada. Here is his story in his own words: 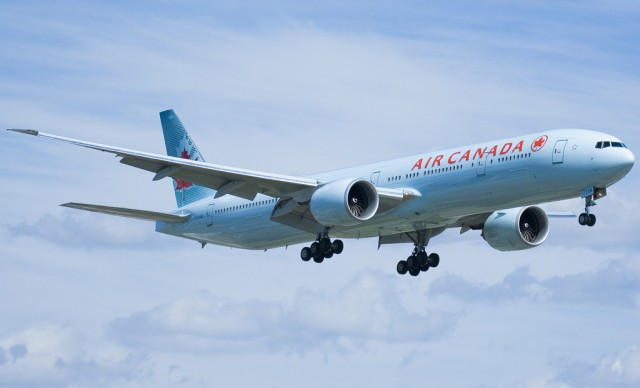 We recently took a packaged vacation throughout Britain and Ireland. To get to London and home, we specified Air Canada flights 848 on September 16th and 849 on October 2nd respectively. Ostensibly these were requested for their departure and arrival times, allowing us the most practical time in London. But, honestly, I chose them to ensure we would ride on the Boeing 777-300ER equipment; 18.5-inch seats and 32-inch pitch ’“ more than the rest of the fleet.

Was everything perfect? No. It can never be, but those flights came close to being as good as possible.
Things started off with the check-in process at PIA, which to our delight, and using the self-serve kiosks, was almost effortless. Right after I figured out how to get the machines to read our passports that is; a bit better signage might be in order there.

Our air-venture progressed to the gate personnel who did their level best to actually load the aircraft by row number, politely but firmly turning folks away when they tried to barge through. Most of the ’œairport vultures’ were indeed held at bay. And this same effort happened at Heathrow inbound too.
Outbound, we backed out more or less on time and arrived within 10-minutes of sked. Inbound, Heathrow ground traffic raised its all-too-normal ugly head, and we were nearly an hour off the published pushback time ’“ not AC’s fault.

Both flights were packed to the gills. I expect that the captains were able to declare themselves as Air Canada ’œvery heavy’ to ATC during the departure processes.
On-board service, both ways, was totally contrary to, in our experience, the undeserved reputation of Air Canada staff. They were, to a person friendly, prompt, helpful and more-than-willing to assist.
Food was okay. Wine or other beverages were readily available. And the AVOD system worked all the way, both ways; including my favourite ’œwhere the heck are we’ channel. Would someone with some authority officially say thank you for us?

The guys at the front-end were informative, good humoured, and when those timing issues arose in London, honest and forthright. That, plus keeping a firm hand on 375-tons of thoroughbred aircraft to produce the rides we got, deserves a nice note from the higher-ups as well, we think.

The only complaint we have, and it really falls more into a firm request is, please, please enforce, manage, and have passengers observe the carry-on size and quantity rules. Right at check-in. Luckily the triple-sevens have relatively large overhead luggage bays; otherwise some of the extraneous nonsense being hauled into the cabins might have had to be bungee corded to the wings.

Lastly, we were almost an hour from deplaning to receiving our luggage. The GTAA folks really need to build in some staffing contingencies when through no fault by the airlines, planes arrive later than planned. Air Canada is big tenant there; they should feel free to exercise their rights as hub customers.

https://www.airlinereporter.com
How the DOT is Involved in the Awarding of International Routes – Guest Blog
MiniUpdate: RwandAir Boeing 737 From Seattle to Rwanda
13 Comments

Great post! I had no idea also that Air Canada had 777’s!

Nice posting, thank you for sharing.

It is not just Air Canada, but every airline should strictly enforce carry-on rules. Failure to do so punishes those passengers who do follow the rules, and encourages them to abuse the rules on their next flight.

And no, I don’t care if a passenger is very important (in their own mind), can’t spare the time to have baggage unloaded, yada, yada, yada, they need to follow the same rules as everyone else.

Why wouldn’t the baggage delay be ACs fault?? I find the bag wait on AC (13 years Elite status) generally far greater than any other airline, regardless of airport. Unless it is an airport where AC ground services are contracted out.
Otherwise, I find their service overall to be very good.

Very nice post. I am a frequent flier and most often it is with Air Canada. I have always found their staff displays the utmost professionalism and I have never had a bad experience. I have generally found that most often the passengers who do the most complaining are generally the ones who “break” the rules and the people no one wants to be near.

whatever even this guys complains about the process – people have to realize that the fact a flight takes off is a miracle – 6 million parts assembled (the aircraft) – 50 thousand pounds of fuel – mined and refined (also a miracle) staff who smile (trust me they don’t care about the fact that you want a can of coke with or without ice – live with it pax) and serve food (also a miracle – a cow how to die so you can be happy), someone had to cook your food (went to school for lotso years to learn how much salt went on that piece – o – meat) their bags and clothes on their back – made through a process which everyone looks down at – but is a process which without we would be naked .. the pilot – a life dedication so that he/she can know how to land/takeoff and turn on/off autopilot (yup gonna say it again – dedicated his/her life to – a miracle) I can go on … most people don’t know how to make a cup of coffee and complain about the airline industry… whoever this guys is that talks about his Heathrow exp – get on a canoe and paddle across the Atlantic and see how long it takes your baggage to get there buddy?! There I’m done

Air Canada is the Canadian goverments tool, these new aligations against porter are crap. The same as the West Jet trial of the 90’s.

I LOVE AIR CANADA ITS MY FAVOURITE AIRLINE i like 777-300er and 200lr i like the picture its nice.

What’s Going down i’m new to this, I stumbled upon this
I have found It absolutely helpful and it has helped me
out loads. I hope to give a contribution & help different users like its helped me.
Good job.

They could talk with developers and observe how they create characters, tales, what challenges
they encounter with the publisher/maker/boards – then how they might get yourself a positive change
to the procedure, to permit interesting and new female personas to be showcased in the online games (as playable personality, NPCs, story-only figures, etc).

It’s an remarkable article for all the internet people; they
will take benefit from it I am sure.

What’s up colleagues, its wonderful piece of writing concerning educationand completely explained, keep it up all the time.

My brother recommended I would possibly like this blog.
He used to be totally right. This post actually made my
day. You cann’t imagine simply how a lot time I had spent for this info!