Last week Virgin American started flying to Chicago O’Hare International Airport (ORD) via Los Angeles (LAX) and San Francisco (SFO). Not only was there celebration, but a big challenge placed to legacy airlines to watch their back — Virgin America is in town.

Virgin America seems like the little airline that could. Back in 2007 when they first started operations many of the large carriers barely took notice. Now, the San Francisco based airline keeps growing with a fleet of 39 Airbus A320 and A319 aircraft that serve 14 destinations. The airline currently has 60 additional Airbus A320s on order and plans to keep growing their route network. It is hard to argue that Virgin America does not deliver the best in-cabin product of any domestic carrier, and with prices matching other carriers, they could give the legacy airlines a run for their moneyÂ (story continues below photos). 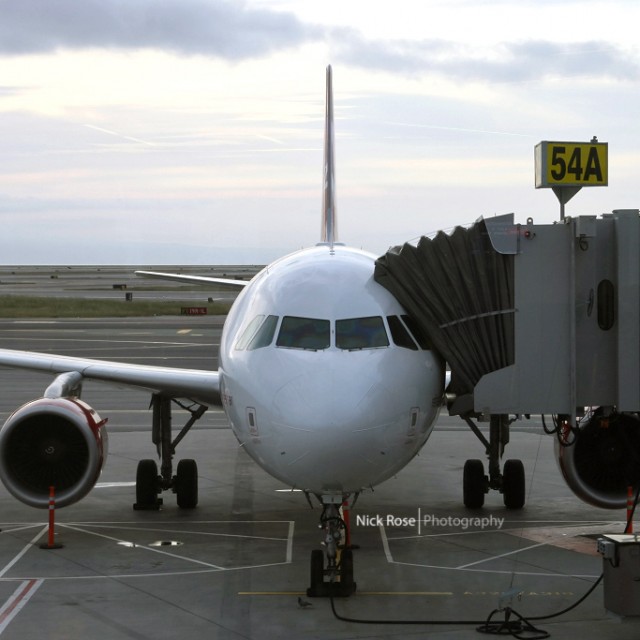 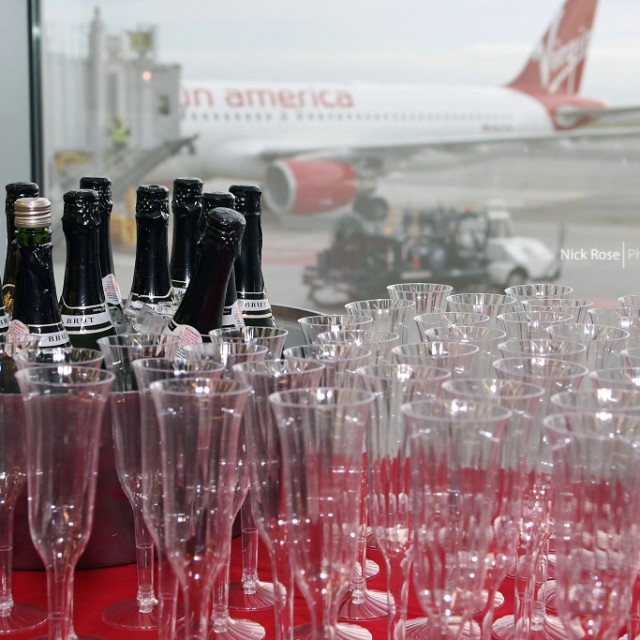 Some bubbly in San Fran before take off. 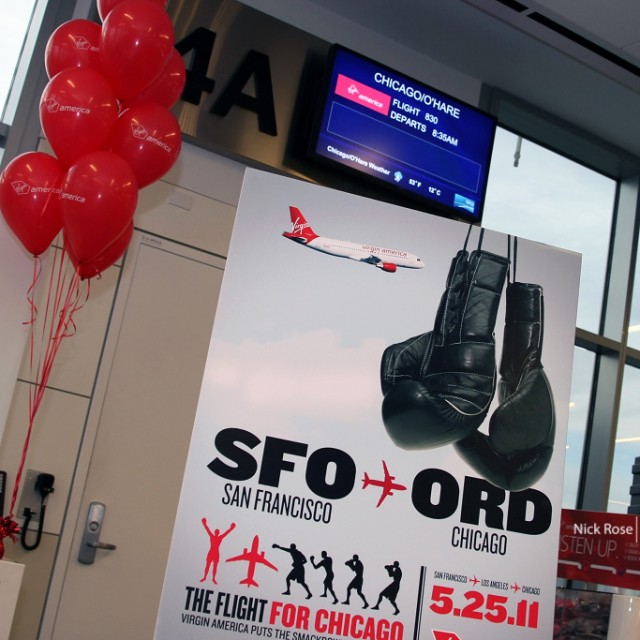 Get your fight on. 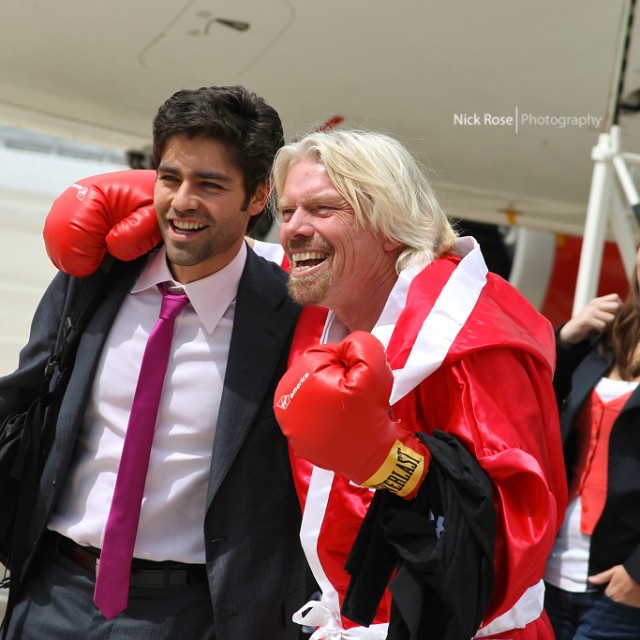 Adrian Grenier from the show Entourage with Sir Richard Branson. 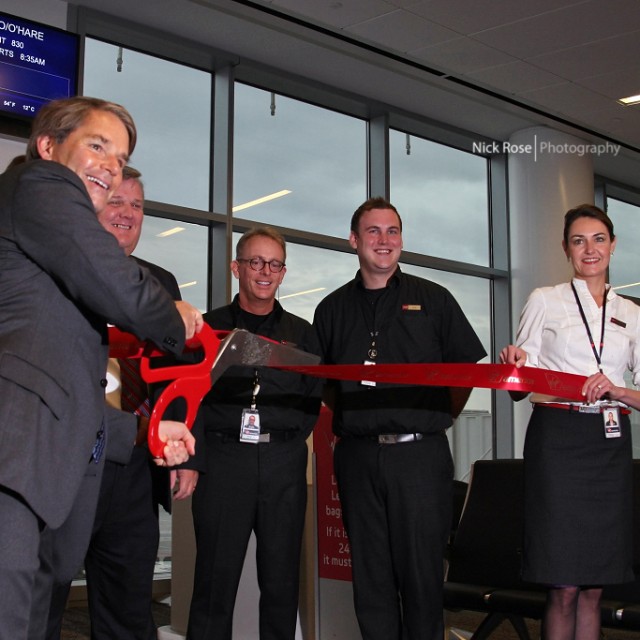 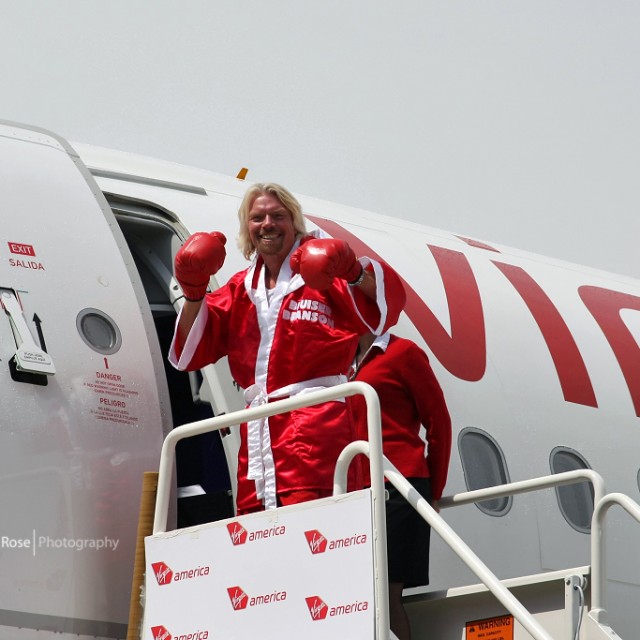 â€œUntil today, travelers flying from Oâ€™Hare to the two largest California airports had little choice and few low fare options.Â  We believe our flights will be a breath of fresh air for Chicago travelers and thank the City and Oâ€™Hare officials for their efforts to open up access to new competition,â€ said Virgin America President and Chief Executive Officer David Cush. It seems that Cush might be talkingÂ directlyÂ about United (which is based in ORD) and American Airlines (which has a hub at ORD) when he stated, “Flyers deserve more options than just the off-chance they may be upgraded from poor to mediocre on a legacy airline.”

United spokesman Rahsaan Johnson told the Chicago Tribune, “Our strategy is squarely focused on giving customers the most convenient schedule and access to the broadest network. We have competed with multiple carriers in these two Chicago-West Coast markets for years. We will continue to do so and will continue to win.” Those sure sound like confident fighting words to me.

Sir Richard Branson told the Chicago Tribune that, “We’ve had to fight our way into Chicago,” as he credited the big airlines at O’Hare with “knocking out” Virgin’s previous attempts to serve O’Hare for three years.

Virgin America isn’t stopping the fight at just flying to ORD, they too are offering special frequent flier rewards. Passengers flying between now and August 31st will be able to earn triple Elevate rewards points flying between LAX, SFO and ORD. Who doesn’t love a little battle of the airlines — well maybe the airlines, but it sure is good for customers.

Of course the large elephant in the room is that Virgin America doesn’t have aÂ good track record of making profit. Yes, they are still a new airline flying new airplanes into expensive airports, so it could just take time to make a solid profit. Virgin America does offer more bang for the buck, but will it be enough to woo over passengers who are loyal to larger carriers? So far it seems that Virgin American think they can. They brought the fight to Chicago and it looks like others airlines have heard the call. It will be interesting to see what happens next.

Due to being stuck in Dallas because of bad weather, I was not able to make this exciting trip with Sir Richard Branson. Luckily, others were able to capture the excitement:
* Story and photos from Jaunted of Virgin America’s Chicago event
* You can see more of Nick Rose’s photos on his Facebook page (a big thanks for sharing your photos)

Virgin America may be young, and not yet have turned a profit, but penetrating ORD is definitely something the legacy carriers have to take notice of, especially with Branson pulling the strings.

ORD’s geographic location, and Virgin America’s growth plans could be a game changer at ORD for the legacy carriers, especially with the dust settling from the United Continental merger. I’m very curious to see how it will play out.

Virgin America will impact to UA, AA and WN(From Midway, Public can expect improve of service from these airlines to compete against Virgin America.
US airlines must change service standard back glory of airlines age.

That’s great news, the more competition the better in my opinion.

We’ll see if Virgin can turn a profit in the future…in the meantime, this is good for competition, but the majors (AA, UA) still have one ace in the hole–a large connection base which I’m betting gets the majority of the seats from LAX and SFO. Virgin may be able to siphon off some of the point-to-point traffic, though.

One thing Virgin will deal with in the future is right now, having new planes, they don’t require expensive heavy overhaul (yet). This is the trap that JetBlue fell into after about 4-5 years in the business–their planes started needing overhaul, costing them significantly off the bottom line.

Wow it’s great to see that V American is in Chicago. By the way do you know how many gates they have?