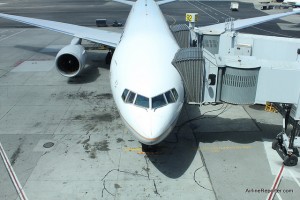 Airlines always seem to get a bad rap. Millions of people happily fly around the world and it seems to always be the negative stories that pop up. I recently was forwarded the below letter that was sent to United Airlines. I felt it was appropriate to share:

To Whom It may concern :

On Jan. 8th my husband and I boarded flight 927 from STL to SFO. We were returning to SFO . Then flying back to HNL. It was a very hard trip for us. We were carrying my brother’s remains . He was to be interred at, The National Cemetery of the Pacific, [Punchbowl]. We had just spend a week in Jefferson City, Mo. setting up the Memorial service and all the arrangements .

After the service, when the lights were dimmed, I found myself reflecting on the last few days. It was the first time my husband and I had actually had a few moments of quite. Soon tears started streamed down my face. A flight Attendant knelt down to my seat and ask if there was anything she could do. Then I explained the purpose of our trip. I shared with her the special flag that had been given to us during the, Military Honors Service . The kind words she shared help comfort me. Also the captain came out and offered his thoughts. I shared with him my brother’s love of flying and during his service to the Air Force traveled all over the world. Then one by one each crew member came to us and oftred their thanks to Bill for his service to his country.

When we landed in SFO the Captain came on the PA and made an announcement. He mention that this was Master Sgt. William Ralph Young Jr. final Flight and thanked my brother for his service to his country. As the passengers started to deplane many came up to us, some hugged us and some with tears in their eyes honored my brother. Thanking us for his many years of service to the United States. It was a unbelievable experience. I know my brother’s love for his country was deep. That love poured back on that final flight.

The crew was one of warmest and most thoughtful group of professionals I have seen in a long while. My husband and I will be forever grateful. I lost the names of the flight attendants , but I am hopeful they will receive my most sincere,”Thank you.” The wonderful Caption and First Officer , where Captain Timothy Gerner and F/O Robert Herrin.

https://www.airlinereporter.com
Seattle’s Airport Has Best On-Time Performance in the US
Airline Livery of the Week: Our Airline
8 Comments

That sounds like a very nice crew on that United flight. Good to know that out of all the airlines and flights out there, there are some that are actually nice and care. And that, I know, is greatly appreciated by many.

I do not know that movie, but added it to Netflix…

Thank you to Master Sgt. William Ralph Young Jr. for serving this great country. I don’t understand why airlines and their employees get such a terrible rap. I have had nothing but amazing service (Nothing approaching this event though) except once or twice (once while flying, once while not, and that led to stunning customer service, which I might as well tell).

In late November my dad and I were booking a mileage run to Australia using some certificates from an earlier flight, so we had to do it at the airport, which is about an hour away. It was a Saturday night, just after they had closed all the ticketing counters and the United checkin was empty, except for the glow of the 100+ easy checkin terminals. We used to courtesy telephone there to call customer service, who said they would try to figure out how to deal with us.
A few minutes later some woman who had just gotten off her shift told us that they may or may not be closed and just walked off, which was throughly annoying. A few minutes after that we were told that the people at baggage claim had been called and would do everything they could do to assist us. We got down there and were greeted by two people, neither of whom was a ticketing agent, but one of whom had been a ticketing agent years ago. She got us booked in about 10-15 minutes. It was really cool to see someone go out of their way that much to do something they had no responsibility to do.

Problem is you have individuals who make or break a company. No matter how great a company is or how wonderful a service they provide, there are going to be people who fail.

But it is about the parent company and how they hire and how they deal with people that don’t do the right thing.

Well the problem with the media nowadays is that you can have every employee and the company itself be amazing, but one bad action and it’s all over the world. People who do the right thing or go beyond the call of duty are rarely noticed, while those who screw up a little bit are attacked. I like that United has the comment cards you get when you get a new MP status card so if you do get outstandig service the employee has something to show for it (I assume they get something, but I’m not positive).

It’s wonderful to hear of those who put in the extra time to help others. It can take such a small amount to show due appreciation.

I’m glad to see stories like this because I know they happen – we often focus on the negative because it’s more marketable.