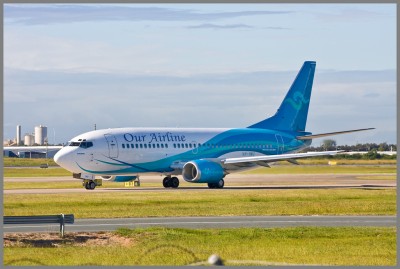 The livery looks clean and it works. I only wish they might have used a different font type, since it is a little too wavy for my taste.

Sorry I could not resist.

No, no please keep going 🙂

Does that mean all flights last an “our”???

Which flights? Our flights or your flights?

Your flights are an our flight

Your flight takes an our to get there if Im right

I can see the rename committee meeting now. It’s 4:50 on a Friday afternoon happy hour is about to start. The boss just divorced his wife and wants to go drinking, but realizes he can’t leave until the new name is picked cause Air Nauru is not playing well in the US cause it sounds foreign and he needs to make money to buy a yellow corvette to pick up chicks. Some one says, “lets get serious we need a better name for our airline. What the heck can we call our airline.” The boss says “Done!, Our Airline is perfect its in English and simple. To the bar!”

If Our Airline is late, the gate sign gets flipped and reads, Their Airline!”

Or, make it bit shorter with “Theirline.”

For your information it was named ‘Our Airline’ as a sign of pride that Nauru and the other smaller nations of the Pacific retained some sort of control over their own destiny. After years of bizarre US diplomacy involving the country’s previous aircraft lease & repossession, a financing deal was worked with Taiwan for a new aircraft (seen in photo) to provide a much needed air link.

Thanks Jack for sharing!