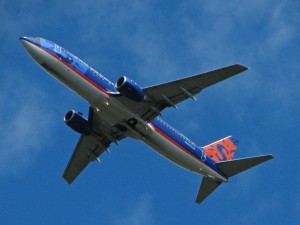 Sun Country, which is based out of Minneapolis-St. Paul (MSP), has had an interesting history. They made headlines when announcing they would start flying from Minneapolis to London with a stopover in Gander using a Boeing 737 and once again when their owner Tom Petters turned out to be running a $3.65 billion Ponzi scheme. Ever since the airline declared bankruptcy after Petters was removed, there has been speculation on if someone might buy the airline out. Now the airline is profitable and it looks like they are slowly looking for a new owner.

Sun Country CEO Stan Gadek told the Minneapolis St. Paul Business Journal that the airline, “will be sold, but a deal is not imminent.” Back in March a filing was made in the bankruptcy case of  Petters. Gadek states that there have been interested parties, but they are waiting for the right buyer.

Godek stated that Sun Country is looking at the possibility of flying to Hawaii, but they are not fully committed yet. The airline is also hoping to expand their charter flights especially with the military. Sun Country is hoping their up coming flight to Germany will highlight to the US Department of Defense their ability to fly internationally. It is likely that Sun Country could undercut other charter operations, using the Boeing 737 instead of larger aircraft (like Omni International’s DC-10s). However, the military would need to be alright with the additional flight time, since the Boeing 737 requires a stop-over on the way to Europe. This also could be a move towards Sun Country bringing on larger aircraft types.

Thanks Rob for the tip!

My guess is: American Airlines. They have not gotten on the merger/takeover bandwagon like the others. Southwest occupied with AirTran, United/Continental occupied with each other, and Delta, who already has a strong presence in MSP, still transtioning from merger with Northwest. Possibly US Airways too since they do not have a hub near MSP. Either US or AMR would make a good fit. Either way, its bound to give Delta some competition up there. Plus, Sun Country occupies the practically brand new terminal away from the busy big original one.

Drew–I don’t think that AA would be interested in Sun Country–probably not big enough for them to register (unless they want their aircraft, which are compatible with AA’s fleet). US a bit more likely, but I think US is looking to AA to merge with.

How about Alaska? They’re successful; fly the same aircraft; and could use another hub further east than Seattle.

Just to help clarify… Tom Petters did not found Sun Country. It was founded by some former Braniff employees in the early 80’s as a charter operation. Bill LaMacchia Jr. helped transform it into a scheduled airline in the late 90’s. They went bankrupt in 2001 and were restarted as MN Airlines shortly thereafter. Petters did not buy it until 2006

Thanks Ben, I have updated the story.

I do have mixed feelings about their future. I think they could actually survive as the small niche carrier they are today. While it seems odd to outsiders, they seem to do quite well here in Minnesota as the region’s “home town airline.” The charter/military service they do offer seems to help pay the bills, while they do have decent and affordable service to those warm weather get aways that so many mid-westerners are craving.

That said, I think merging them with another carrier could help them, if it was the right airline. I’d love for Alaska to take them over, but I don’t think it will ever happen. Delta and Alaska have a tight partnership right now. Why would Delta let Alaska build up a hub, no matter how small, in one of their major hubs? It wouldn’t make sense. No major airline would get anything out of a merger, so it seems like a waste of time there. I guess I could see Jet Blue or Virgin America considering it. They would have to ditch the 737’s, but judging by the article, that wouldn’t be a hard thing to do, since they are all leased. That would give both of those carriers a foot hold in the upper midwest, if they wanted it. I guess the question is does either of those 2 airlines care enough about the region to start a fight with Delta

I think Sun Country is too small for another carrier to buy. Sun Country has always attracted investors. If it was bought by another airline it would have to be one the same size as Sun Country looking to grow.

I never thought it it on the other side. Wonder if an investment group would be looking to buy Sun Country and another airline. Or SC first, then others later.

Running a airline is a rough business. Look at the Republic Frontier Airlines Group. Now some of the other small regional’s are trying to duplicate REJET. More than one carrier. Keeping your coats in line is the hardest part in running any business. Look at all the problems AA is having.

Now I am not sure if someone would buy Sun Country and than build on their name or will buy them to build another carrier up. Everyone’s thinking is oh WN will buy them, or AS will buy them or another big carrier. I think the small carriers are where the growth is. Being small you can be more flexible, but it has its draw backs too. That is what I like about airlines like Sun Country, Keep a low profile, and stay under the radar of the big boys.

Actually the company that could have the most synergies would be AAA. Why you say? AAA owns Pleasant Hawaiian Holidays and could funnel a lot of business through them to Hawaii and even Mexico just like they did previously with ATA. While a 737 would limit them to West Coast gateways, they could add some larger planes if this strategy proved successful. Of course unless you know how much debt and assets that Sun Country has, its difficult to say if they are even a company that will make it through the current oil crisis.

It’s difficult to say who’d be the best buyer for Sun Country. I agree with Rob that the airline is too small, but I wouldn’t rule out a major airline. It would be interesting to see an investment group buy Sun Country and others. I will say that it’s good to see that Sun Country’s management is looking for the “right” buyer and not the “right now” buyer. Too often do companies get bought / sold without evaluating all the options and alternatives.

Reviewing the Syma S107 R/C Helicopter from Xenonproject.com » told the Minneapolis St. Paul Business Journal that the airline, ”will be sold, but a deal is not imminent. Petters did not buy it until 2006