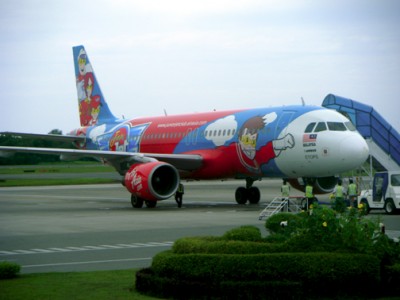 Iâ€™d like to thank David for inviting me back to his blog; I think you will agree with me that Davidâ€™s coverage of the Boeing 747-800 First Flight has been exceptional, so for someone who is 4850 miles away, the coverage has made me feel like I am there.Â Credit for finding this livery has to go to Phil (aka @PlansAirports, aka MR @AirlinesAngel), who spotted it during his tour of Indonesia.

This Air Asia A320 is themed for their Air Asia Junior Jet Club, which is aimed at their young frequent flyers and features members of the Jet Crew. Air Asia, to date, has carried over 82 million passengers, and the fleet has grown from 2 to 85 aircraft and I hear that the staffâ€™s favourite aircraft is the Junior Jet Club plane, so if you are travelling around Asia you might be lucky to be onboard this colourful aircraft.

https://www.airlinereporter.com
Updated: Check Out These April Fool’s Jokes From Airlines
Video: Don’t mess with Texas, If you litter a B-17 will get ya!
1 Comment