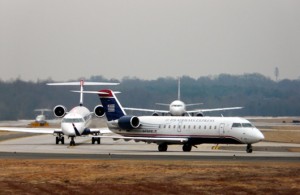 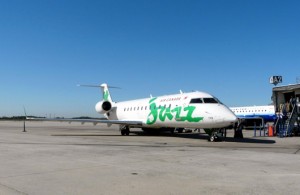 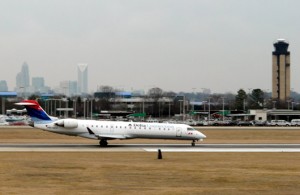 Eventually, this French Canadian company, who also produces the popular Dash-8 family of turboprops, expanded the CRJ fleet design to include a longer -900 version.  The CRJ 900 features a ’œcomplete re-design of all of the structure and systems. In addition, an all-new wing was developed that increases the cruise speed of these aircraft while offering excellent airfield characteristics. These aircraft also feature an all new interior cabin that offers increased room for the passenger, enabled by a lowering the floor by 1’ (2.54 cm) and redesigning the aircraft frame RJ900 that featured as of the original CRJ200, offering more headroom and a wider cabin. The seating and bins were completely redesigned to allow more passenger space and increased bin stowage,’  says Bombardier’s web site.  CRJ 900’s are currently operated by Mesa Air, Air Canada Jazz, Skywest, Comair and Pinnacle Airlines.

As an ex RJ pilot I enjoyed your article very much. I just wanted to note that the CRJ705s flown by Air Canada Jazz are actually CRJ900s. They have less seats and carry a different designation in order to fit under the Air Canada pilot’s scope clause, but are in every other way identical to a 900. The ATC designation for the 705 is the same as the 900. Neither Air Canada or Jazz operate any 700s.

Thanks for the clarifications. I’m just a crazy plane-spotting fan so my data is likely off by a bit.

These airplanes are the most uncomfortable jets in the sky. I travel frequently and avoid them at all costs. I am 6’3″ tall and weigh 250 pounds. There is no headroom, no legroom and the seats are way too narrow. I also agree that the windows are way too low. To top it off the overhead bins are not big enough to put a briefcase in.

This company found a nitch and filled it – well. For shorter range (and time) trips one does not expect long range comfort and they don’t deliver it. Still, the fit the RJ need. -C.

My recent trips were about 1:15. I would not want to fly 4 hours in one but that’s unlikely.

Both CRJ700 and CRJ900 were renewed with higher windows, you probably got the classic version of a CRJ, the new ones are called Next Gen and are way more comfortable.

Also a small correction to the main article. CRJ900 was not a complete new re-design. The Next Gen which was introduced somewhere in 2005 was first done on a CRJ900, and later also applied to CRJ700. Both CRJ700 and 900 are nearly identical but CRJ900 can carry more seats. The difference is between the classic version and the Next Gen version.

I have travelled in both classic and next gen, and I can tell you there’s a big difference in terms of comfort.

Thanks. The “complete redesign” was quoted from bombardier’s web site. Personally I can’t hardly tell the difference between the 700 and 900 at first glance. I appreciate the comments about the next gen versions. Bombardier has a separate section on their web site dedicated to the future of RJ’s.

By the way, there’s also the new CRJ1000 that can carry more than 100 seats with improved systems. Its entry into service was done late December 2010 and reports are outstanding in terms of performance so far. Both European companies Air Nostrum and BritAir launched this program. It may take time before American Airliners buy CRJ1000s though due to limitations on Regional Jets definition.

I was adding up what the web sites mentioned. It doesn’t surprise me that there are that many delivered. At CLT, just about 25% of the aircraft I see on any given visit are RJ’s & Dash-8’s. 50% are some version of the airbus. US Airways indicated a few years ago that they were going to phase out the Boeings (other than the 757’s) into all airbusses for ease of maintenance and common cockpits.

Thanks so much to all for your comments. It gives me inspiration to write more. I welcome them and hope to contribute in the future as much as our gracious blog host lets me. 🙂

I actually added your blog to my favorites list and look forward to get the same quality content every time I visit your blog. Thanks a lot.Bombardier Aircraft Charter