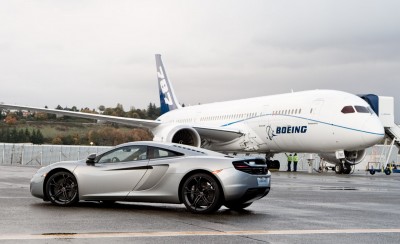 All I can say is that both are incredibly sexy!

But if you could only have one?

Depends – am I paying the operating costs? Or man, think of the taxes…

I think I would take the 787 and charge a bunch of airline nerds money to fly around in it. Then sell it and get a used airliner and used super car!

Naturally, since this is fantasy, operating costs are not an issue.

..they probably both cost the same too…

AA will hang the best engines on the wings, the GEnx engines.

The Rotten Reliability Trent1000 so far has blown itself and a test cell apart and many RR engine change-outs from the 787 flight test program.
Also four T1000s with cracked compressor blades. We do not like RR here at Boeing.

The car pix with ZA003 were taken in stall B-3 at Boeing Field. They brought the car in a shipping container right out to the plane, rolled it out of the box and got their pix. They put the car back in the box, put the box on a truck and they were gone.

Well, that is not nearly as exciting as I hope it was with the two racing around… oh well. Thanks for the info.