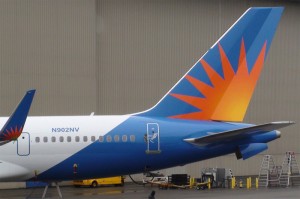 N902NV is a hunk of junk. I engineered several repairs on that acft and it was a corrosion nightmare. The left winglet is barely installed w/in limits (good by 0.001″ on the shimming). Allegiant can even fly the aircraft out of Paine Field. It hasn’t even received certification for it yet. As well has still failed include the 757 into its maintenance program.

Well, if this engineer was really concerned and is worth his/her weight in salt, s/he would have followed the appropriate procedure and involved the FAA as is appropriate; however, if this “757Engineer” is confident in his/her statement and this aircraft has an issue that harms or ends lives in the future, then I hope this “757Engineer” will come forward and reveal him/herself at that time so s/he can be prosecuted, as would be appropriate. Put your money where your mouth is “757Engineer” and come forward if you have evidence that needs to be scrutinized by the proper aviation authorities, otherwise knock off the rumor.