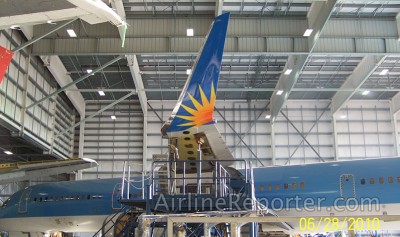 Allegiant Air has announced service to Hawaii using Boeing 757s. We don’t know from where or when, but it is exciting for a number of different reasons.

Allegiant currently only has a fleet of MD-80 aircraft. Their business model of owning their older aircraft has worked and seeing a deviation from their current model is prettyÂ interesting. It also means we get to see Allegiant’s livery on another aircraft type.

The airline is expanding their route map to Hawaii, which will be the longest route they serve. To help do this, AllegiantÂ is retrofitting their newly purchased Boeing 757s with blended winglets.

Yesterday I hoped to get a glimpse of the winglets while the the aircraft are being worked on at Paine Field, but no luck. I figured they would be locked away, but it was a hot day and maybe a hangar door would be open. However, I was lucky enough to get in possession of this wonderful photo of one of Allegiant’s Boeing 757s with a new liveried winglet. You can see that the body still has the old Thompson livery without titles.

My former landlord is a Delta 757/767 pilot. He said that the winglet upgrade to 757’s is only about $5000 per winglet and, whereas aircraft get less miles per gallon as they age, winglets actually make the MPG increase with age! Pretty cool but remember this is coming from a pilot. The UPS Airbus 310’s that frequent Charlotte have been upgraded with the traditional airbus dove-tail winglets probably for this same reason.

I believe the winglet mod kit and installation is about $2,000,000. About 3-5% initial fuel savings at same crusie speed as non-wingleted aircraft.

Please keep thoniwrg these posts up they help tons.

Not sure how I missed the photo before. Glad to see you posted it. I’m a pretty big fan of Allegiant, they have a great (simple yet pleasing) livery and they are keeping old good ol’ MD twin-jets in the air. Now, I wonder if they will sell die-cast 757 models on those flights? I sure hope so.