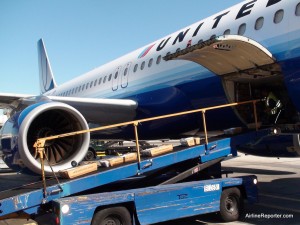 Working on the ramp can be pretty exciting. No, Matt does not work for United, but this is a photo I took while in LAX on the ramp.

Working as a ramp agent for an airline can be exciting and challenging. I was recently able to talk to a ramp agent, Matt, and learn a little bit more about what it is he does. I am purposefully not sharing the airline or airport that Matt works at (you might be able to narrow it down with some of the answers), so that he could be honest without worrying about saying the wrong thing. Here is our interview:

AirlineReporter: When did you start working for your current airline?
Matt: I joined the airline in December of 2006 as temporary Christmas help and was hired on permanent the following month. The company lists my date of service as being in January, but lists my seniority date in December. The way they went about moving me from temporary to permanent involved firing me one day and rehiring me the very next. It was a strange experience (for me at least, this may be commonplace in the industry, I’m unsure) having it handled in such a way and has caused some headaches through the years (most recently involving my vacation allotment for the coming year).

AR: What is the biggest challenge you find with your job?
M: I’d say the biggest challenge in my job is dealing with the apathy amongst my colleagues. Those that have been with the airline over the past decade have had to endure a bankruptcy and the subsequent cuts to their salaries & benefits. There is very much a divide between management and the front line staff (though there is an air of change with a relatively new CEO in charge, so I’m seeing an improvement) and the years of friction have worn on everyone. Dealing with that on a daily basis is definitely a challenge, but I try to keep in mind that I’m here for the passengers and am an important link in their having a good experience while flying with us.

AR: What is your favorite part of the job?
M: There are actually two aspects of my job that I enjoy: The first is helping out passengers. While I am a ramp attendant, and I don’t have much interaction with our passengers on a daily basis, I do enjoy the moments where I get to help them out.

The second aspect is one of the functions I can be tasked with as a ramp attendant. Running connecting bags from inbound flights is a challenging job that requires sound decision making and time management skills (especially in cases where you’re running domestic, trans-border & international connections from one flight). It’s a function where you’re either on the ball or getting run over by it and can be hectic at times, but it’s the most enjoyable function that I’ve found in my time with the company.

AR: What is the worst part of your job?
M: The least favourite part of my job is another function. Working the lavatory truck is just the worst thing one can do there. Surprisingly, some employees aspire to the position, but for me it’s the function I dread.

AR: What is the worst day in your job that you can remember?
M: It shouldn’t be a surprise then that my worst day involves working the lav truck. The G8/G20 summit was on that day (a great week for spotting on the field) and we had a thunderstorm pass through the area, closing the ramp for over an hour. Lav blocks (the schedule of flights for the shift) are typically tight, so having a delay made things that much worse and I ended up working back-to-back-to-back flights with no chance for a break until late in the evening. I had a 777 on the block, so I had to make time to empty the truck before servicing that flight, else I might not have had enough room in the tank. I went to the lav dump bay and emptied the truck and headed back to the 777. At some point along the route, the lever that controls the valve on the tank opened. I didn’t catch it and ended up emptying a tank and a half of lav waste on to the ramp (you can probably get the stats from Boeing as to the capacity for each tank on a 773ER – I’d love to know). I then spent the next three hours spreading Absorball on to the mess & shoveling it into cans for disposal. It was the absolute longest and most physically draining day I’ve ever had.

AR: What is your favorite aircraft to work?
M: My favourite plane to work is still the 77W (777-300ER). It’s perfect. The lines are smooth and graceful and the aircraft just looks right. The 77L (777-200LR) doesn’t hold the same appeal, despite being from the same family. The proportions, to me, just don’t look right – the aircraft fuselage looks too short to my eye in comparison with it’s engines (though, the 772 with the PW engines looks a little better proportionally than the GE90 77L).

AR: What is the weirdest thing you have found on an airplane?
M: This is another story from last summer (seems to be the summer for things happening). I was on a ramp crew for the summer bid and we were working an outbound flight. The bags were brought out and we were told by the runner that they had some bags that were rather smelly and would be coming out last.

Nothing out of the ordinary there, we’ve dealt with oddly scented baggage before, so we thought nothing of it and went about the onload. Sure enough, as promised, the smelly bags made their appearance and we loaded them on the plane. I was out of the hold by this point and was loading bags on the belt. I didn’t envy my coworker who was in the hold, loading the bags. It wasn’t long before the hold was filled with the scent of the mystery meat and he was having trouble coping with the scent. Thankfully, he was at the door at this point, so he was getting some fresh air. Eventually though, he was overwhelmed by the smell and had to get out of the hold as he started gagging.

We were talking at the top of the belt when this happened and he told me he was going to throw up because of the smell. Of course, he said this while facing me and I told him to throw up on the catering truck and not on me!  I didn’t think the smell was that bad. You could smell it outside of the hold, but it wasn’t as strong as it was mixing in with the breeze. I’ve never been so wrong about something in my life.

We had a few more of the bags to load, so I grabbed the next one and proceeded to load it. It had been wrapped in a plastic bag, but the bag had had a hole ripped in it (presumably by someone testing the smell factor). When I set the bag down, the air that was in it proceeded to rush out the hole and I got a small whiff of rancid monkey meat.

We were told that it was monkey meat that was in the bag. I can’t be completely sure that it was actually monkey, it was at least plausible. The smell churned my stomach and I started gagging myself. I’ve worked lavs and I figured that was pretty bad smelling on its own, but this bag was of a whole other magnitude. Who knew meat that had been sitting in a bag for two days, unrefrigerated, could smell so very bad?

I had a fun conversation with the pilots when I went to do the pre-departure communication check. Apparently, the smell had made its way into the cabin and they could smell it on the flight deck and were wondering what it was. I told them what it was and they had a good chuckle about it. We eventually ended up offloading the bags and the passenger (who claimed she had no meat in her bags) and they were left for the midnight baggage agents to deal with.

AR: Do you think you will ever leave the airline business?
M: I can’t ever see a time when I won’t be in the industry in some capacity. I’m an airline brat who was building crude model aircraft in kindergarten out of scrap wood (back in the day when they let you play with a hammer an nails at that age); the smell of burnt kerosene gives me goosebumps; watching an airliner liftoff into the sky makes me believe in magic. There is just something about being there, around the planes, that makes me content. This is the industry where I belong. I have been debating taking a temporary leave however, as I want to further my education and the current options I have where my work schedule are concerned make it difficult to achieve that goal. I’ll have to see what the summer bid brings and make a decision from there.

https://www.airlinereporter.com
Could This Be What the Next Boeing 737 Will Look Like?
Up Close and Personal with a Boeing 747-400 Dreamlifter
11 Comments

Great Interview. Toronto is my guess for the airport. Hope for more of these “inside look” interviews in the future.

So of the 777-300ER operators, I found there were only two that I found (there were some without links to CEO, so not sure, but those were all Asia/Mid East ones) to have a “relatively new” CEO. One is Air Canada, so it would fit with the Pearson prediction, but Air France KLM CEO is just as new (start of 2009).

I like you are trying to solve the riddle, but it doesn’t mean he worked with the same airline :). Could have switched and one had 777-300ER and the newer one didn’t.

From how it sounded he has worked at the same place all the time.
This rat needs to be outed so his employer can deal with him appropriately. Just kidding (of course), keep this interviews coming.

I know who he works for….

Wow, my day to day life! To everyone else guessing who he works for, get over it………you ain’t real. One love to all my beltloader bredrins!

Dear sir here I am committed to do any kind of job wwhich discribe under safety standred limited I am very keen for the job in poland I am ready to switching. Thanx mehtab her in pakistan local time is1600 hrs now.