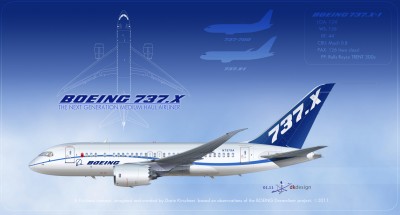 https://www.airlinereporter.com
Airline Livery of the Week: Flybe – who wanted actors to pretend to be passengers
INTERVIEW: A Chat With an Airline Ramp Agent
22 Comments

The AS mock up looks like a 757 which I think airlines would like more. If they can range the seat capacity from 125-200 seats, it might be just as successful as the original 737.

Thanks for sharing David.. I agree with Daniel, the AS mock up looks alot like the 757. I happen to be a huge fan of the 757 and would love to see the new 737 have some of this sleek design carryover from the 787 program.

I kind of like the new teeth behind the engines a la the 787 and 747-8. The additional 2nd main door would likely fit nicely with a 2 class config (not req’d for southwest). Also, the winglets appear more swept like the 787. It looks like they’re putting some 787 into all the newer aircraft…if this is to be a true representation. Kudos to the author!

Lets not forget that Southwest has been a strong advocate for over 10 years for a new aircraft with a configuration of 2 + 3 + 2.

Quicker boarding and deplaning while seating more than the current 737-700.

No, depending on the variant, the seating capacity would vary from 140 to 180.

I like the above mock-ups, but I doubt the engines will have RR decals.

Sixty years ago, when I was little more than a teaspoon-sized dream in the eyes of my parents, Boeing sent my father home with a check (or pay envelope) every week. He moved on to other options, but several relatives enjoy Boeing pensions. BAC made good choices in those days and they still make mostly excellent choices. Their aircraft have moved me (and undreds of millions of others) around the world and more times that some of us wish to count. Boeing usually makes very good choices! So what is their choice for the follow-on to the 737 Series? I have no clue. Speculation is +/- worthless, but I’ll bet that our friends at Boeing are giving this topic intense consideration. The bits and pieces that their experts are considering in detail would boggle our simple minds. We know that they have entire teams devoted to this stuff, groups like-minded staffers from more science and social science fields than Boeing has ever before employed. Pilots often note that they like to be ‘ahead’ of their aircraft when preparing to land. Boeing has demonstrated a bent for staying ‘ahead’ of their markets and for more than sixty years. Whatever the next major step, Boeing will know exactly where they are headed. I am not worried about them or th[eir future. With the 737 as the most successful commercial aircraft of all time, >6000 delivered and >2000 orders in the bag, they are in a sweet spot. Their dreamers made the 777 and they are putting the final touches on the Dreamliner, 787. There have been a few bumps. So? What radically new airplane has not suffered through some significant bumps? When Boeing is ready, they will reveal some new airplane to take the 737 market segment from 2020 through 2060. And it won’t be a Q&D photo-shopped re-engine arrangement. With potential sales of between 5k and even 10k units, Boeing can afford to take a deep breath, think it through and deciede what they want to sell for the next ‘few’ years – and get it right. We will have to wait a few years to know where they are headed, but it is a more than fair bet that it will be a very fine airplane. Boeing has several advantages. One of the less obvious ines is that they listen to their engineers and scientists (and Dreamers) and they can make stuff happen, very quickly. I won’t be flying in 2050, but my grandkids will be. Aheywill be flying on Boeing airplanes!
-Craig
P.S. to the blogger: Your technical stuff has improved markedly in recent months. Good job! Keep you standards high.

Hey all, I’m the trouble maker who conjured this idea and did these illustrations. I thank David for taking interest and choosing to post my (hobby) work. I also thank Gordon Werner for hooking David and I up.

The 787 is using RR engines, as do 757-200’s and since this really is a fantasy idea, I imagined that RR would develop a mid-sized engine sung their latest Trent developments that could power the 737.X-3 on the upper end and the smaller 737.X-1 at the lower end. This would also fill a gap that exists in the current RR lineup of engines.

I imagined Alaska would be the launch customer for the -3 variant, hence the illustration above.

What do you guys think the chances are of Boeing doing something revolutionary like a 2-2-2 seating?

Even if B737 is the most successful aircraft from the Boeing family, I prefer Boeing going for a brand new design. Boeing should continue improving the current B737NG. The new design might be more successful.

These profiles look interesting. I like the one at the top better, the plane looks friendly. The big tail fin is overly dominant, though.

I worked on the RS program. The idea behind the new airplane was to replace 3 aircraft with the new 737-R. No designation was given at that time. The 3 airplanes to replace were the 717, 737 and 757 by adding sections to the fuselage for and aft of the mid (wing) section. It would use the same engine on all 3 variants and set the performance characteristics in the engine control for the type of usage. It was also suppose to have Trans Atlantic capabilities on the Ext Range Version. All the aircraft it replaced were Center Isle aircraft. The aircraft had the same fuselage diameter as the 757. It had a new carriage and repositioned nose wheel. The flight deck and manufacturing was to leverage the 787. Several flight decks were considered. From traditional column wheel to side stick. Pilot workload was also considered and trying to reduce the amount of heads down time. Who knows what it will be like in the end state. But Great pics. A little off on the cockpit area but close.

The 787 should be the benchmark for all new boeing aircraft even the replacement for the 747. Boeing has to start to move foward otherwise airbus,will put boeing out of buisness and boeing will be forced to close down

Working with both the 737NG and the 757, i believe that boeing should have go with updating the 757 over the 737. The 757 was such a poorly designed plane. the 767 which was released around the same time is WAY better than it. One thing i did see in the 757 was room for SO much improvement. the 757 was built like the A320 was (i know the 757 came out first just hear me out). instead of making it close to the ground like the 737 is, the 757 still has room for engine improvements without having to make huge changes to the landing gears. I agree with one of the above statements, a 757 update would have been better.